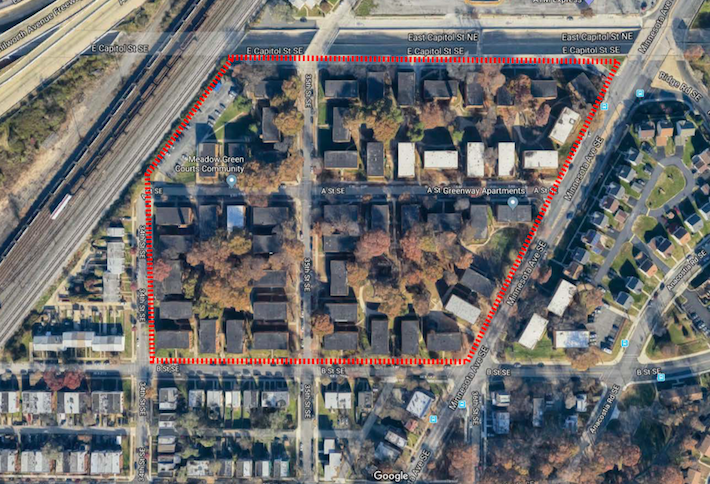 A community of 1940s-era apartments in Ward 7 could soon be razed and replaced with over 900 units of mixed-income housing.

The apartment complex comprises 53 buildings totaling 461 units across four blocks near the intersection of East Capitol Street and Minnesota Avenue SE. Turnaround has already begun redeveloping individual buildings on the property, and plans it filed last year for a new 90-unit building hinted that a much larger project could be coming soon.

Its latest application seeks to rezone the entire 12-acre site to allow for higher-density development. It said the rezoning would allow the owner to raze all of the buildings and replace them with a 907-unit development. Up to 435 of the units would be set aside as affordable, and the remainder would be market-rate. Turnaround is working with development consulting firm E&G Group on the project.

The application was filed as a map amendment rather than a planned-unit development, allowing the development team to avoid the process that has allowed appeals to delay many similar projects, including the redevelopment of Southeast D.C.'s Barry Farm community. The Meadow Green Courts Resident Association filed a letter in support of the rezoning plan the development team is pursuing.

"We are satisfied that E&G will offer the same level of consultation and input as would be required in a PUD," Meadow Green Courts Residents Association President Shirley Thompson-Wright wrote in the letter. "The PUD process in the District has become subject to extended delays. A Map Amendment can be done more quickly."

The property sits just east of the Anacostia River, about 1 mile from RFK Stadium. It is also a half-mile south of the Safeway-anchored East River Park shopping center, which owner Cedar Realty Trust is planning to turn into a mixed-use development.