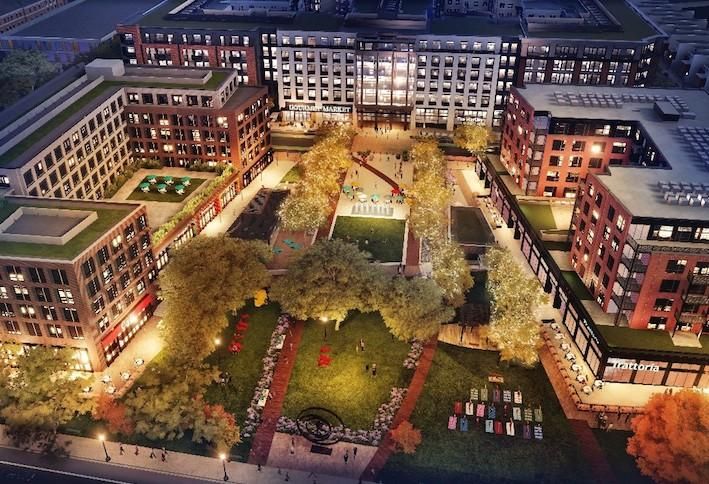 Courtesy of Hines
A rendering of the Parks at Walter Reed development, with The Hartley in the center.

A global pandemic and economic crisis is not slowing down the Parks at Walter Reed development team, which is planning to begin construction on a new mixed-use building next month.

The team of Hines, Urban Atlantic and Triden Development Group, along with new joint venture partner Bridge Investment Group, announced Tuesday it closed on the acquisition of the 1.5-acre piece of the site where they plan The Hartley, a 323-unit building anchored by Whole Foods.

“As the focal point of the Town Center, The Hartley will be critical in transforming The Parks and opening the site to the community," Hines Senior Managing Director Chuck Watters said in a release. "We are excited to work with Bridge on this project given their depth of experience in multifamily development."

The team bought the land from the D.C. government, which acquired the 66-acre Walter Reed Army Medical Campus from the U.S. Army in 2016. Santander Bank N.A. and EagleBank are providing the construction financing for The Hartley.

"We are excited about the continued progress at the Parks at Walter Reed, and today we mark another big milestone for the development with the closing of the Hartley — the future vibrant town center of the community,” Acting Deputy Mayor for Planning and Economic Development John Falcicchio said in a release.

The closing of the land sale and financing come after the team in December inked a 40K SF lease with Whole Foods to anchor the building. The team expects to break ground next month and deliver the project in early 2022. 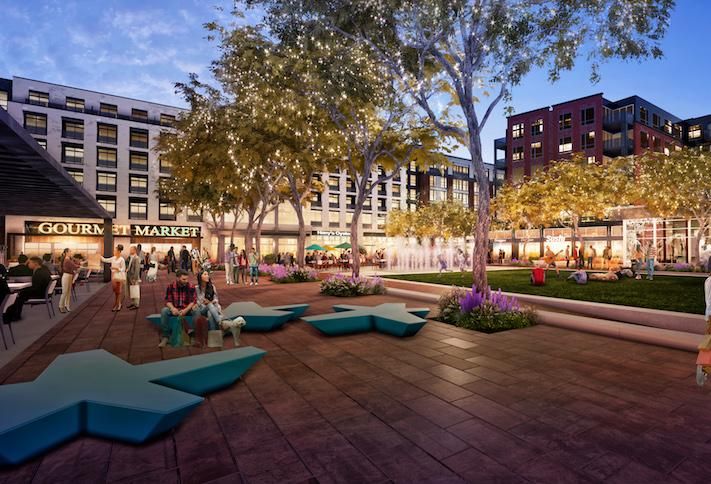 Courtesy of the Office of Deputy Mayor for Planning and Economic Development
A rendering of the central plaza in the Parks at Walter Reed development, with the grocery store on the left

Torti Gallas Urban is serving as the architect, with Hickok Cole Lifestyle designing the interior and Oehme van Sweden working on landscape design. CBRE+Streetsense is managing the retail leasing.

The Hartley is the latest in a series of buildings to break ground on the 66-acre campus. After the team began work in April 2017, the first building, 77 units of affordable housing for homeless veterans, welcomed residents in October. The team also broke ground early last year on an 89-unit condo building, The Brooks, and a 301-unit apartment building with 18K SF of retail, The Vale.

Additionally, Children's National Health System broke ground in November 2018 on a pediatric research center on a 12-acre portion of the campus. The Parks at Walter Reed project is ultimately planned to include 3.1M SF of mixed-use development, with 2,100 residential units and 130K SF of retail, a combination of new construction and adaptive reuse of historic buildings.