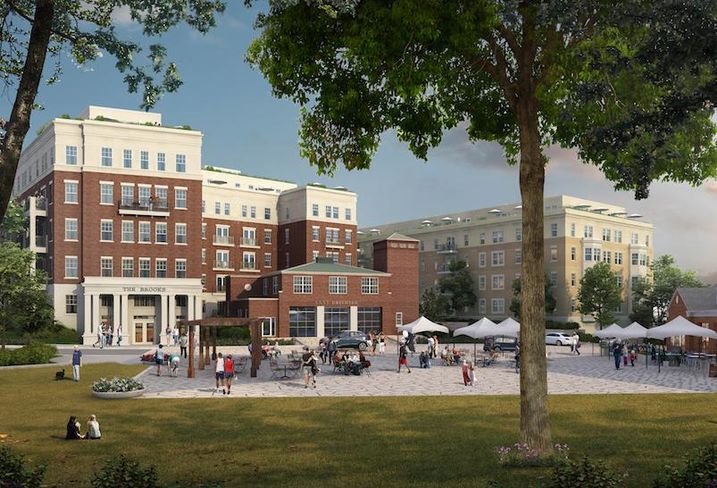 Courtesy of Streetsense
A rendering of The Brooks and The Vale, the first two new-construction buildings planned at The Parks at Walter Reed

The first two ground-up buildings in the 66-acre Parks at Walter Reed development in Northwest D.C. are moving forward.

The development team of Urban Atlantic, Hines and Triden Development Group announced Tuesday it closed the land transfer and financing for two multifamily buildings that will total 390 units with retail.

The apartment building, The Vale, will consist of 301 units and 18,300 SF of retail on a 2.25-acre site along Georgia Avenue NW. PGIM Real Estate was brought in as an equity partner on The Vale, and Capital One provided the construction financing. The financing for the adjacent 89-unit condo building, The Brooks, was provided by Grosvenor Americas and EagleBank.

The District acquired the shuttered Walter Reed Army Medical Center campus in summer 2016 from the U.S. Army for $22.5M and signed a ground lease with the development team later that year.

Demolition and infrastructure work began on the Walter Reed campus in 2017, and last year the team began work on the redevelopment of an existing building to include 200 apartments designated for senior and veteran affordable housing. The development is ultimately planned to include over 2,100 residential units, 150K SF of retail, 185K SF of office, a 200-room hotel, 116K SF of medical space, 30K SF of arts and cultural uses, two charter schools and 20 acres of open space.