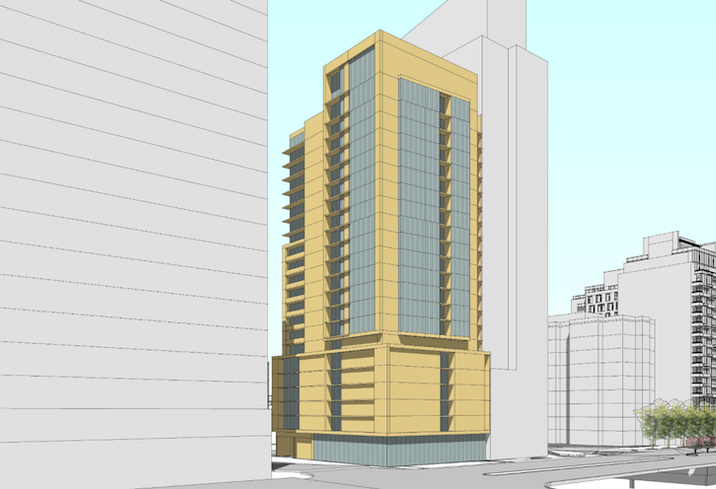 UPDATE, NOV. 29, 5 P.M. ET: Donohoe Development is the developer that is under contract to acquire this Bethesda property. A previous version of this story incorrectly stated it was for sale. This story has been updated and includes new information from Donohoe.

Donohoe Development is looking to replace a Downtown Bethesda hardware store with a 22-story condo tower.

The locally owned hardware store, which has been open for over 100 years, is merging with KONST SieMatic, a kitchen remodeling store two blocks south, and plans to sell its products out of KONST's 7500 Wisconsin Ave. location, Bethesda Magazine reports.

As it prepares to move, Union Hardware is looking to get the most out of its two-story property that sits in the heart of a fast-development area. The store owner, working with Donohoe and SK+I Architecture, filed plans with the Downtown Bethesda Design Advisory Panel for a 225-foot-tall tower with retail space on the lower levels and condos above.

“It doesn’t make sense to have a two-story building like mine in the heart of Bethesda, when we should be forward-thinking and creating a better-designed community,” Union Hardware owner David Goldberg told Bethesda Magazine.

The site is directly across the street from where Marriott will soon move its headquarters into a 21-story tower being developed by Boston Properties and Bernstein Cos. Three other high-rise office developments within a half-mile of the site have attracted several other companies to move to Downtown Bethesda.

Donohoe is nearing delivery on a 219-unit Downtown Bethesda apartment building at 4850 Rugby Ave., following the full lease-up of the 234-unit first phase of the Gallery Bethesda project next door. Donohoe said he believes it is the right time to begin developing for-sale housing product in the Downtown Bethesda market. The developer aims to break ground on the condo project in two years and deliver in 2022, the same year Marriott plans to move in next door.

"We see a little bit of a for-sale opportunity that is lacking in Bethesda right now," Donohoe said. "Right when a big employer moves is that one opportunity that employer has to shift people's commuting habits, so the thought that there would be rental and condo opportunities in Downtown Bethesda for those new workers is an exciting one."