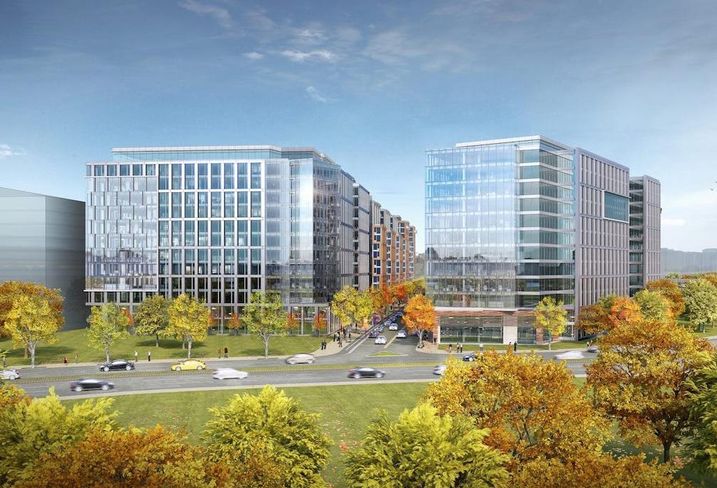 After having the approval of its 2.3M SF Poplar Point development appealed in June, Redbrick LMD appears to be changing course.

The developer filed a new application with the Zoning Commission last week, posted to its online database Monday, to rezone the 8-acre property near the Anacostia Metro station where it has planned to construct the five-building Columbian Quarter development.

The zoning request, filed as a map amendment, appears to be a departure from the developer's strategy of pursuing a planned-unit development for the project. PUDs have become increasingly risky in recent years as opponents seize on them to stall developments in court.

The Zoning Commission filed its approval of the PUD in May. The development was approved for 1.6M SF of office space, roughly 700 residential units and 52K SF of retail on both sides of Howard Road SE. In June, a group represented by frequent development opponent Aristotle Theresa filed an appeal of the project's approval with the D.C. Court of Appeals. This reporter discussed the appeal with Theresa on WAMU's "The Kojo Nnamdi Show" in July.

Redbrick has not withdrawn its PUD, according to the public case file, and the appeal is still going through the court. The development team did not respond to requests for comment.

The map amendment seeks to rezone the property from its current MU-14 designation, which allows for buildings up to 90 feet, a floor area ratio of up to 6.0, and a lot occupancy of 75%, to a new designation.

The new zoning class, called the Northern Howard Road Zoning District, would allow for buildings up to 130 feet, a 9.0 FAR and 100% lot occupancy. It would also set aside 10% of residential units as affordable, with 75% of those units reserved for households earning up to 60% of area median income. The application does not specify how many square feet of development the new zoning classification would allow on the site.

The rezoning application also includes one new parcel not included in the PUD: the Cedar Tree Academy Public Charter School property at 701 Howard Road SE. The filing includes a letter from the school, signed by its principal, authorizing Redbrick to include the property in its zoning application. It does not specify what would be built on the site under the new zoning.