The delayed start of the Major League Baseball season will have teams playing in ballparks with empty seats, but the latest apartment building to deliver near Nationals Park adds a new way for some fans to see the game. 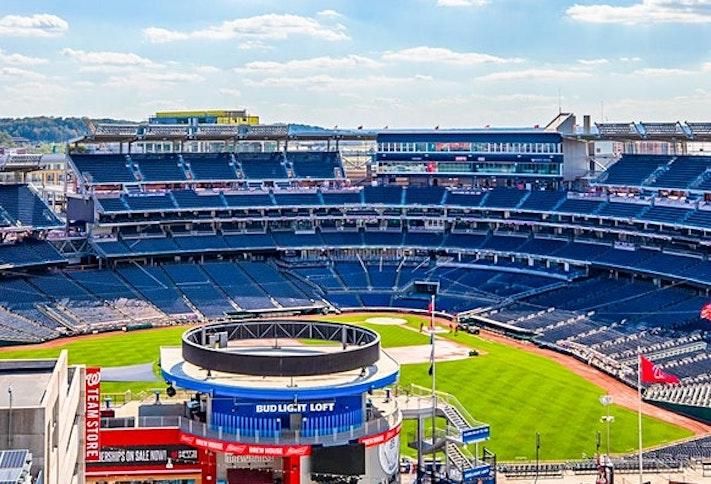 The Kelvin, the 312-unit apartment building from Jair Lynch Real Estate Partners, began moving in residents last month. The apartment building is part of a mixed-use development that also features a 127-unit condo building, branded as eNvy, and 60K SF of retail space.

The development team spoke with Bisnow about the project, shared new pictures and unveiled new retail tenants that will move into the ground-level space on Half Street.

The developer signed Taphouse-99 to lease a 2,582 SF retail space in the building and ice cream shop Kilwins to open in a 1,632 SF space, a spokesperson tells Bisnow. These two retailers aim to open by the end of the year.

The spokesperson also confirmed the developer signed bar and restaurant Chicken + Whiskey to lease 3,210 SF in the building, a deal first reported by Bisnow in May. The bar and restaurant is expected to open by the second quarter of 2021.

"We've been very much engaged with all of our retailers, and we're creating environments for them so they can be successful," Lynch said. "[Punch Bowl Social] is very close to finishing construction, but we're not pushing them to open when they can't be successful, so we're definitely engaged, and reticent, to make sure we have successful retailers over the long term." 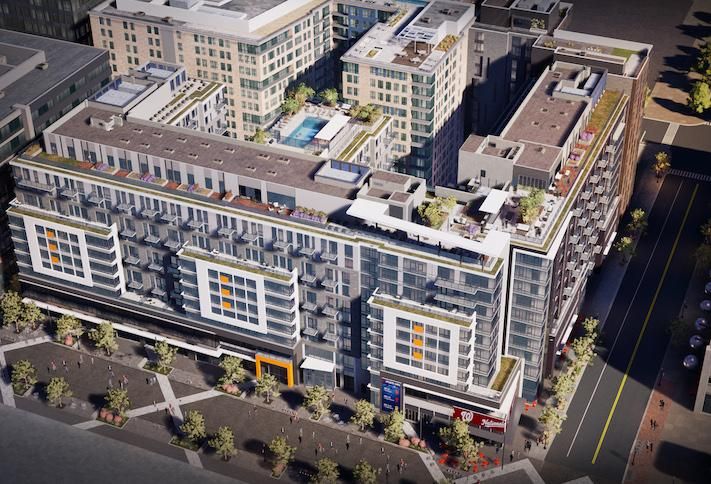 Courtesy of The Kelvin
A rendering of The Kelvin's exterior and rooftop amenity space, which is still under construction.

The management team began pre-leasing the apartment building in February and had leased 114 of the building's 312 units as of Tuesday, said Bozzuto General Manager Mark Hannan, who is leading the building's leasing efforts. He said this pace has met the team's initial goals, assisted in part by virtual touring technology, but he said it has still been challenging to fill a building during a pandemic.

"We could have been doing better if the pandemic didn't happen, if the building delivered on time and people were able to physically see their units and do in-person tours" Hannan said. "It hurt us, but we're ahead of our pro forma budget, which was initially 18 units per month."

One of the top factors drawing renters to the building, Hannan said, has been its proximity to Nationals Park. The building sits at the corner of Half and N streets SE, directly across the street from the ballpark's main entrance, the centerfield gate.

The Kelvin is one of a handful of buildings with views into Nationals Park from its rooftop, an experience that could become even more valuable when the team plays games without fans allowed into the park.

The shortened 60-game MLB season is scheduled to start July 23, with the reigning World Series champion Nationals hosting the New York Yankees in the first game. The Kelvin's rooftop is still under construction and will not be ready by then, but it should be completed within one to two months, Hannan said.

"If the Bud Light Porch wasn't there, you could see the entire game," Hannan said. "That is going to be available for residents to catch the second half of the season and whatever playoffs they come up with for the modified season. Then, for the 2021 season, when we're hopefully back in normal activity, if you don't want to buy a ticket, you go up there and get the same aesthetic as the ballpark with the comfort of home."

While the lack of fans in the ballpark has made the rooftop views more exclusive, Lynch said he would prefer the area to have the energy that comes with a full ballpark.

"Hopefully, next season there will be fans in the audience," Lynch said. "I think a few people will enjoy the spectacle of seeing the game from our building, but they're going to want the energy that comes with the fans." 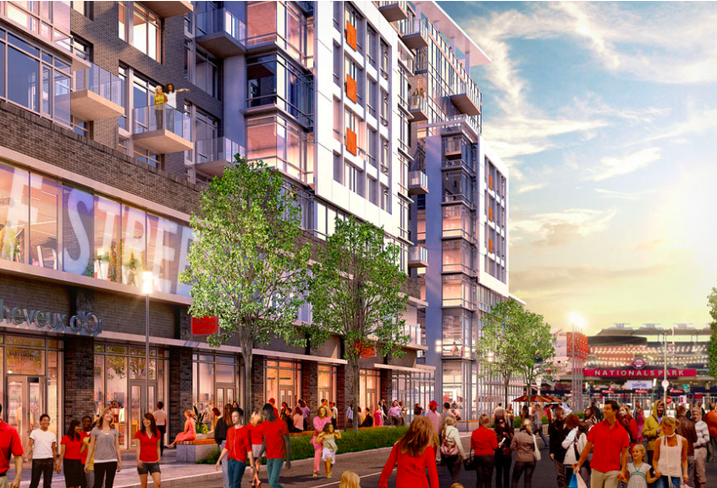 Jair Lynch Real Estate Partners
A rendering of the Half Street retail corridor, which is still under construction.

The Half Street retail corridor has been envisioned as a vibrant, pedestrian-friendly promenade leading up to the ballpark, but it has remained under construction longer than originally planned.

Lynch said he does not expect the fully imagined Half Street experience to materialize until a coronavirus vaccine is available and people can congregate in crowds. But he said the neighborhood will have the ability to close vehicular traffic on Half Street to allow for expanded outdoor seating, a strategy some parts of the region have begun to pursue during the reopening process.

"We have the ability to close it on game days and major events, that's already set up, so it's a natural extension to utilize the entire street under this reopening scenario to drive business," Lynch said. "The larger enhanced streetscape opportunity at Half Street is really set up so we can have a plaza, an outdoor dining room."

While The Kelvin's retailers may not be open during this year's baseball season, the retailers across Half Street at JBG Smith's new West Half building have begun to open, including Atlas Brew Works. Additional bars and restaurants around the ballpark include Mission, Walter's Sports Bar, The Salt Line and beer garden Dacha.

Even without fans attending the games, Hannan said he still expects the ballpark-area restaurants and bars to be filled to their allowable capacity on game days.

"Not only are people still amped about the title last year, but I think they're itching to get out, and it gives people something to do," Hannan said. "I think the bars are going to do really well and bounce back, especially the ones with outdoor seating. You're going to get people walking around and wanting to feel like, 'Hey, there's a game going on outside, and I'm right next to it." 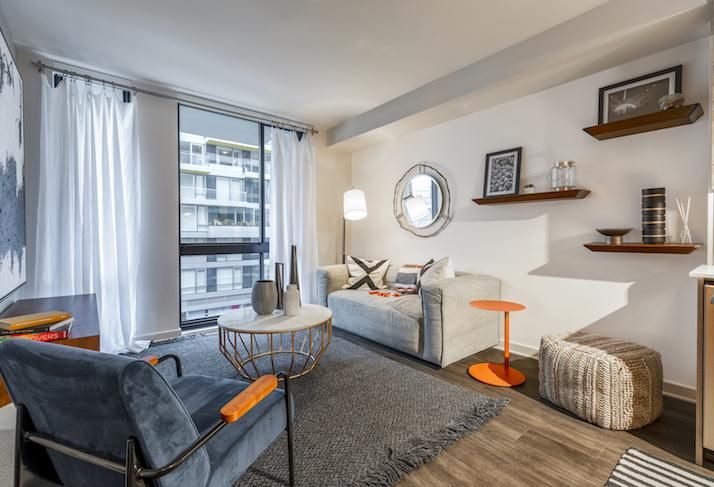 Courtesy of The Kelvin
A living room in a model unit at The Kelvin.

The activity of the ballpark area has shaped the demographics of the renters that have been leasing units at The Kelvin thus far, Hannan said. While he said the team is marketing to all demographics and there has been interest from a mix of renters, he said the signed leases have tended to be younger people without children.

"It really has been a decent mix of people, not a lot of families, but you've got to imagine that when you're across the street from Nationals Park and what's going to be a pretty busy Half Street with a lot of restaurants and activity, it's definitely a younger demographic," Hannan said. "It's those folks that maybe this is their second or third apartment, they've moved up a little in their jobs and careers and made a little more money." 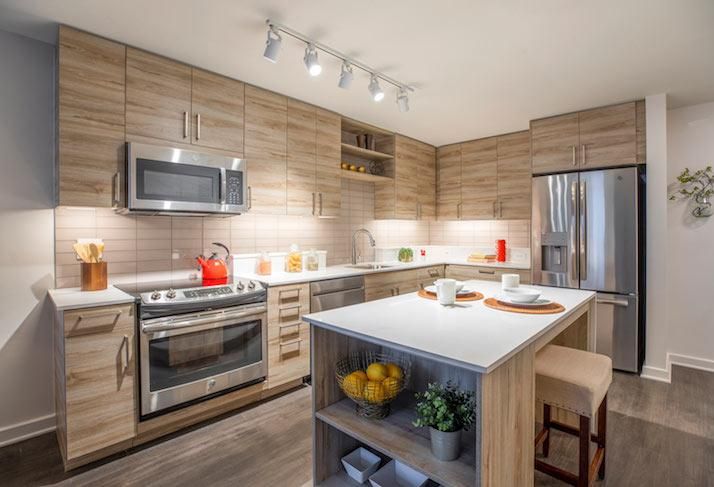 Courtesy of The Kelvin
The kitchen in a model unit at The Kelvin.

The building is competing with a host of new apartment offerings in the Capitol Riverfront neighborhood. Hannan said it has stuck with its initial concession package of one month of free rent to tenants that sign a lease of at least 13 months, and it has yet to expand concessions or bring down rents.

"People have a million options when you're talking about the Navy Yard," Hannan said. "The standout for us is going to be our amenity spaces and our location." 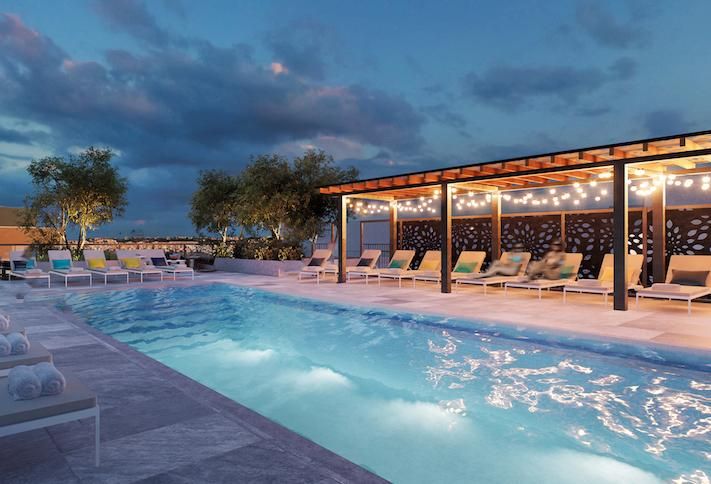 The amenities atop the 11-story building include a heated pool, seating areas, grilling stations, fire pits, outdoor televisions and an indoor rooftop clubroom with a catering kitchen and billiards. 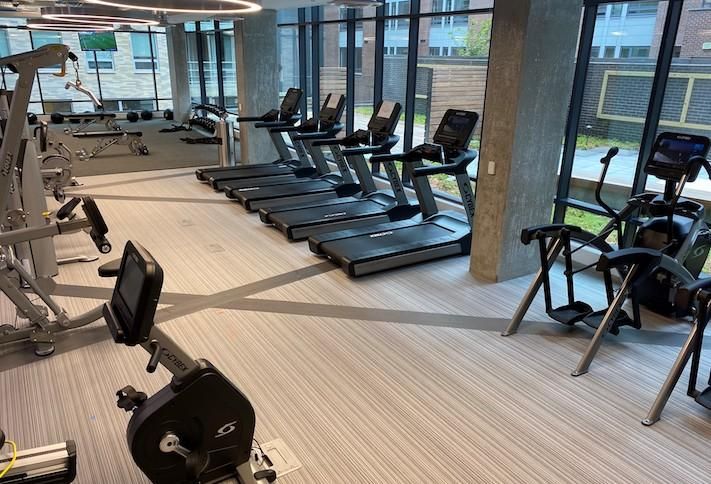 Courtesy of The Kelvin
The fitness center at The Kelvin.

The building also features an amenity space that covers much of the second floor and features seating areas, televisions, table games, video games and working areas.

"The large second-floor space spanning almost the entire footprint of the building is really important in making sure people feel comfortable and can be out of their apartment in the common spaces doing group work sessions and having the ability to walk quickly outside and go to the retailers on Half Street," Hannan said. "That is the most important thing we have." 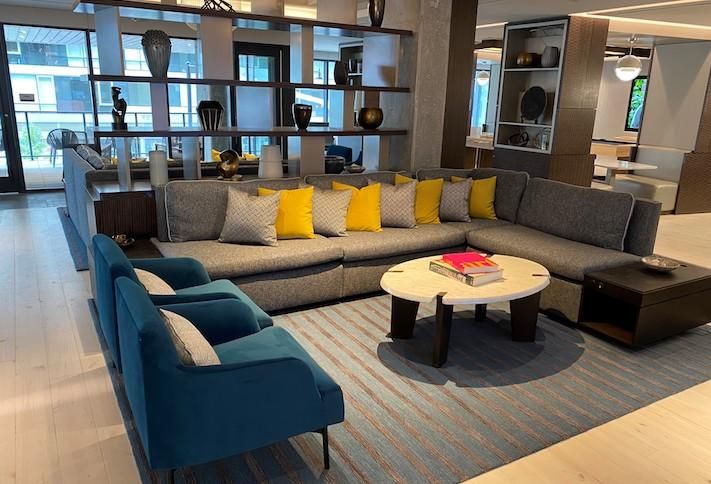 Courtesy of The Kelvin
The second-floor amenity space at The Kelvin.

Lynch also highlighted the second-floor amenity space as a key differentiator, noting that the floor-to-ceiling windows give it views directly onto Half Street.

"One place of the building I really love is the second-floor amenity space," Lynch said. "We have several areas right on the glass that allow people to view what's happening on Half Street, so it almost feels as though you're in the upper tier of a small intimate playhouse and you can watch the play in front of you."