Inside Avec, The Massive Development Spanning 2 Blocks On The H Street Corridor

A two-block stretch in the middle of the H Street corridor has been under construction for more than three years, and now a massive mixed-use development has delivered on the site that could be transformative for the bustling retail corridor. 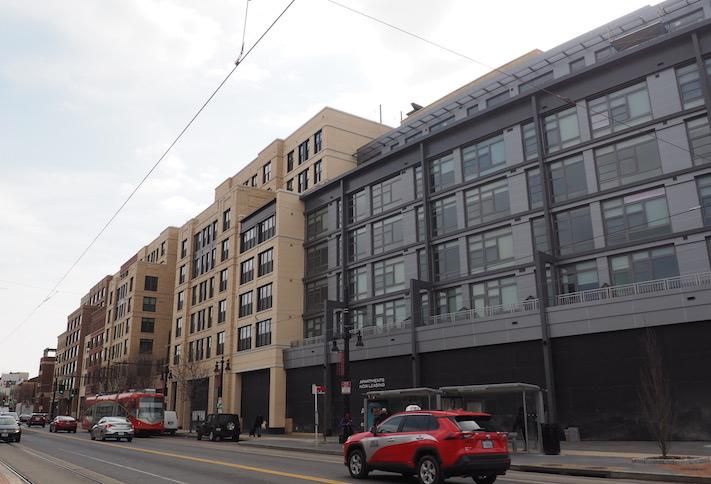 In recent weeks, residents began moving in and the first retail tenant opened at Avec, the 419-unit development stretching from Eighth Street to 10th Street NE.

The development was a partnership between Rappaport, which built the H Street Connection shopping center that was previously on the site, and WC Smith, which spearheaded the residential portion of Avec. Torti Gallas + Partners served as the building's architect and SR/A designed the interior.

The project will help fill a gap on H Street that existed between the multifamily buildings with ground-floor retail on the western portion and the bars and restaurants occupying low-rise retail buildings on the eastern side, Rappaport President Henry Fonvielle said.

"Avec bringing Eighth Street and 10th Street together should be the glue that brings the whole corridor together," Fonvielle said. "We have the opportunity to get two full blocks focused on bringing a tenant mix that will deliver what the neighborhood really needs to be a neighborhood."

The delivery of Avec comes after the 2016 openings of two large mixed-use buildings on opposite sides of H Street between Sixth and Seventh streets: The Apollo, a 431-unit building anchored by Whole Foods, and Anthology, a 307-unit building with Starbucks and other retailers. As more residents have moved into H Street, Fonvielle said the need for neighborhood-oriented retail amenities has greatly increased. 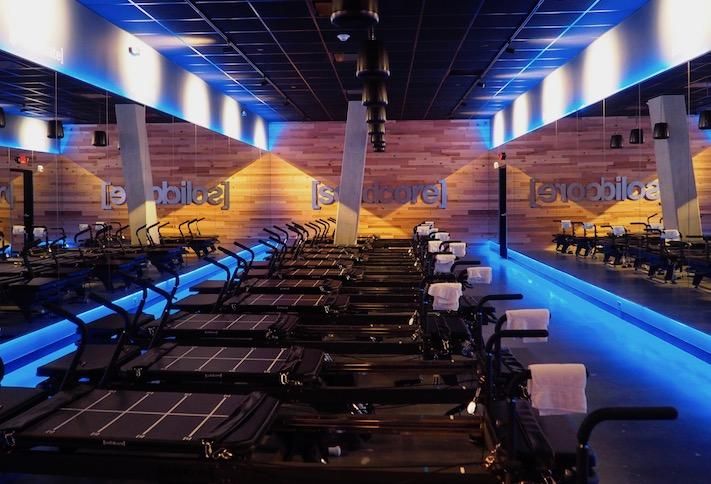 Bisnow/Jon Banister
The inside of the Solidcore studio in the Avec building on H Street.

The building has 44K SF of retail space across the two blocks of H Street. Thus far, it has four retailers that have committed and one that has opened.

Solidcore opened in a 2K SF space last month. The D.C.-based fitness chain has expanded to more than 70 locations across 21 markets, including eight in the District. Its closest locations to H Street were previously in Capitol Riverfront and Mount Vernon Triangle.

"Even though Solidcore now qualifies as a chain, it is homegrown," Fonvielle said. "Anne [Mahlum] started it in Washington, and it is part of the fabric that created the boutique fitness craze ... We really feel strongly that it is the perfect tenant to encapsulate where we're going." 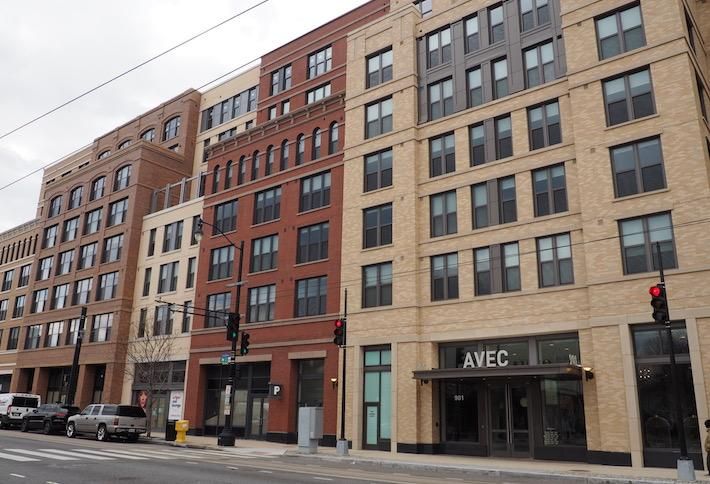 Bisnow/Jon Banister
The entrance to the Avec residential lobby on H Street NE.

Rappaport has announced two additional retailers that have signed on at the building: Urban Nail Lounge plans to open in late Q2 in a 1,500 SF space, and AT&T signed on for a 1,300 SF store.

A veterinary center, Heart + Paw, plans to open in a 5,300 SF space in the Avec building, according to public records. The developers have not announced the lease and declined to comment on it. But the team submitted an application to the Zoning Commission in October seeking approval for the veterinary use in the building. The Office of Planning recommended approval in January, but the Zoning Commission has yet to issue its final decision.

H Street Main Street Executive Director Anwar Saleem said he has been happy with the retailers the team has signed thus far.

"Those are good because you have a lot of pets in the area ... and you don't have too many places where people can work out in the neighborhood," Saleem said.

Saleem said he hopes to see the remaining available space at the Avec building draw new types of retailers to H Street such as clothing stores, shoe stores, specialty goods and art uses. If any spaces remain vacant for a period of time, Saleem said he would like to see the developer bring in pop-up concepts to create activity and new opportunities for local businesses.

"I would prefer new types of things that H Street doesn't have, but one outstanding restaurant there on that block would help with the traffic," Saleem said.

The developer is indeed seeking to bring in food and beverage concepts to the building. Rappaport Director of Leasing and Brokerage Alex Shiel said Avec has two spaces best suited for a restaurant, one on the corner of 10th and H and one next to the residential lobby. 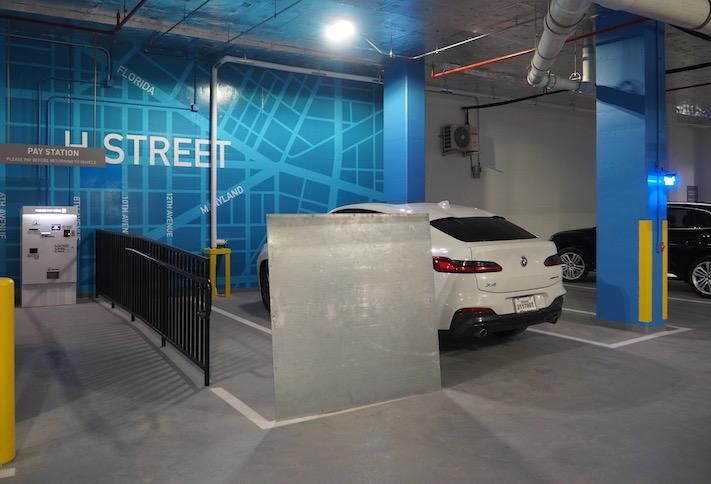 Shiel said the team is in talks with multiple restaurateurs who have expressed interest in the spaces. He said he hopes to bring in a higher-end style of restaurant than what exists on H Street.

"There is a missing gap in full-service restaurants, not something that is unapproachable, but somewhere you can feel good about bringing your spouse on an anniversary and making a reservation," Shiel said. "There are awesome spots where you can get great food and cocktails, but that particular segment of the food and beverage side is missing."

Rappaport is offering tenant incentive packages to help retailers pay to build out their spaces. It also has potential draws including locker rooms with showers for retail staff in the parking garage. The parking garage has 124 spaces dedicated to retail customers who can park free for 90 minutes. 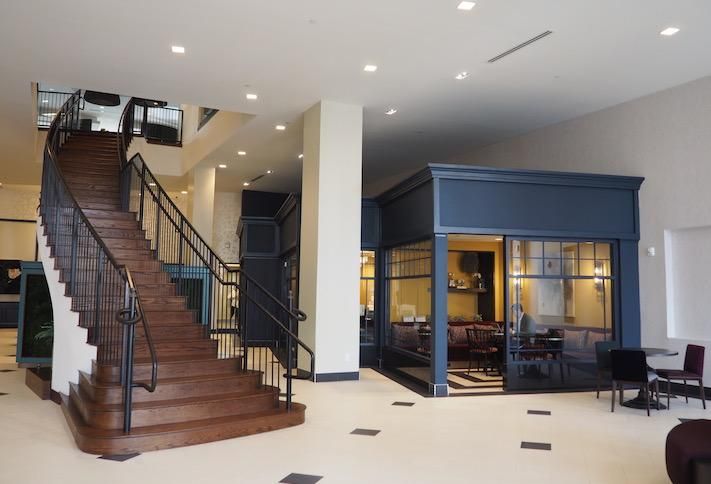 Bisnow/Jon Banister
The lobby inside the Avec building on H Street.

On the residential side, the development team created a host of amenities aimed at attracting renters to the building.

Inside the building's lobby, the leasing office and lounge areas are designed in the style of retail storefronts, a nod to the H Street corridor. The lobby features a prominent staircase that leads to the second floor, where many of the building's amenities are located. 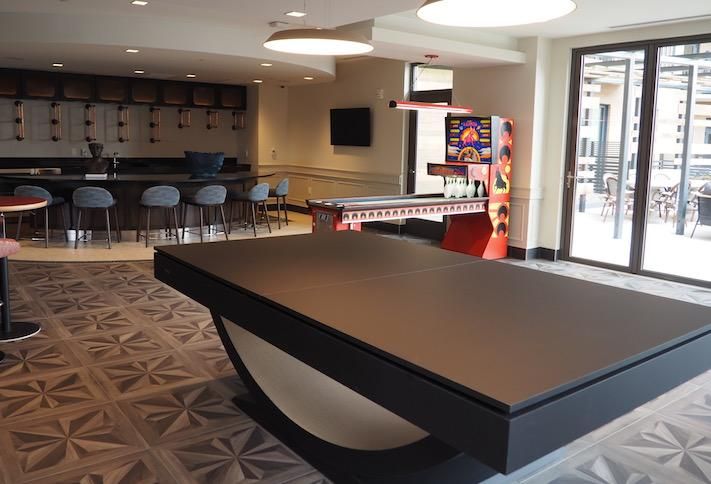 Bisnow/Jon Banister
The clubroom on the second floor of the Avec building, with a door to an outdoor amenity space.

On the second floor, an expansive indoor-outdoor amenity space offers a variety of places for residents to gather. The indoor portion features games, a bar, five televisions, several lounge areas and a coworking-style space with free coffee.

The WC Smith building management team is working with event planner ResEssential to organize a series of events in the space. It plans to host events such as watch parties for football games, binge-watching parties for popular TV shows and cooking classes.

The second floor features two outdoor courtyards on either side of the indoor clubroom area. One of those outdoor spaces connects to the building's fitness center. 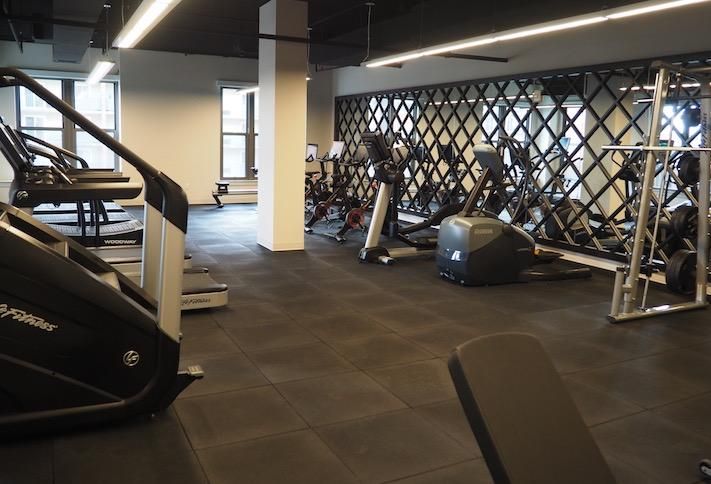 Bisnow/Jon Banister
The fitness center in the Avec building.

Rather than place the building's HVAC equipment on the roof, the development team pursued a more expensive method of placing it on a mezzanine level in order to maximize the amenity space for residents. 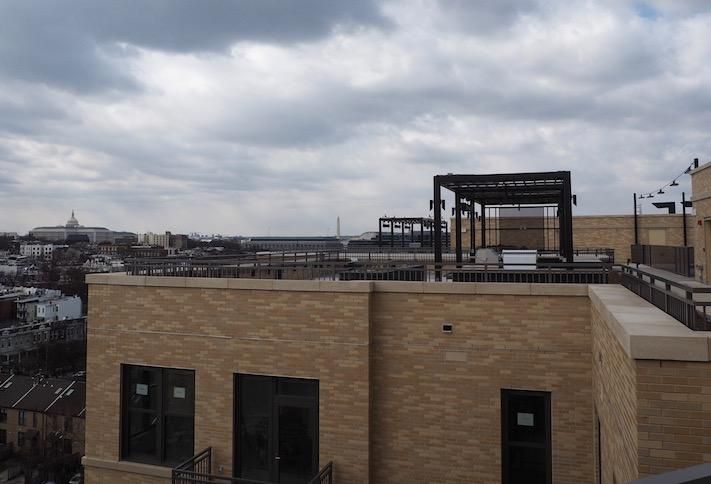 Bisnow/Jon Banister
The rooftop courtyard and view of the U.S. Capitol atop the Avec building on H Street.

The building's 16K SF rooftop amenity space is still under construction, but it is expected to begin opening within the next month.

The rooftop features a swimming pool, a dog park, a community garden and three lounge areas, one of which will be available for private parties. 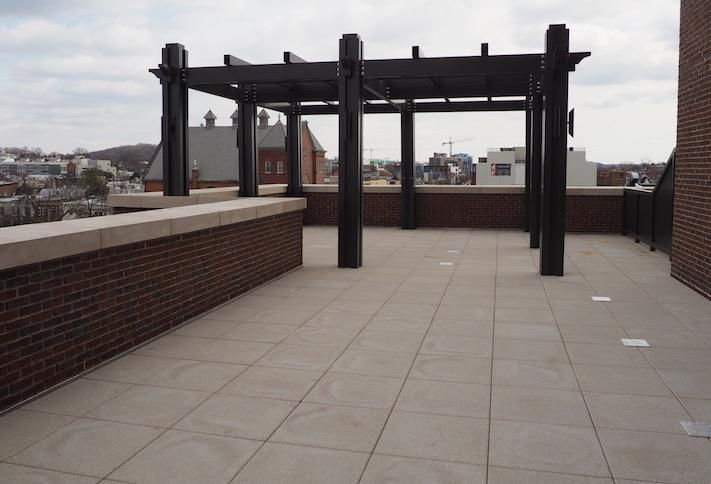 Bisnow/Jon Banister
An 1,100 SF private terrace in a fifth-floor two-bedroom unit in the Avec building on H Street.

The Avec building's outdoor spaces are not limited to the amenities available for all residents. Because the building's design featured a series of step backs, a series of units offer large, private outdoor terraces.

One two-bedroom unit on the fifth floor features its own 1,100 SF outdoor terrace, larger than the 1K SF indoor portion of the apartment. 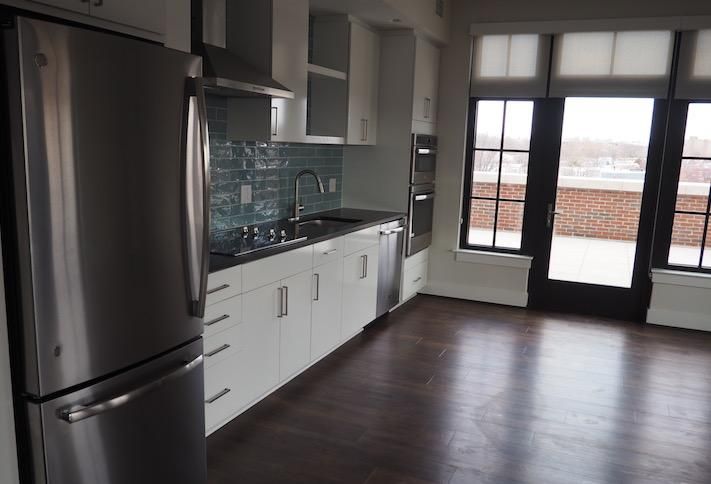 Bisnow/Jon Banister
The kitchen and door to the private terrace in a fifth-floor two-bedroom unit in the Avec building. 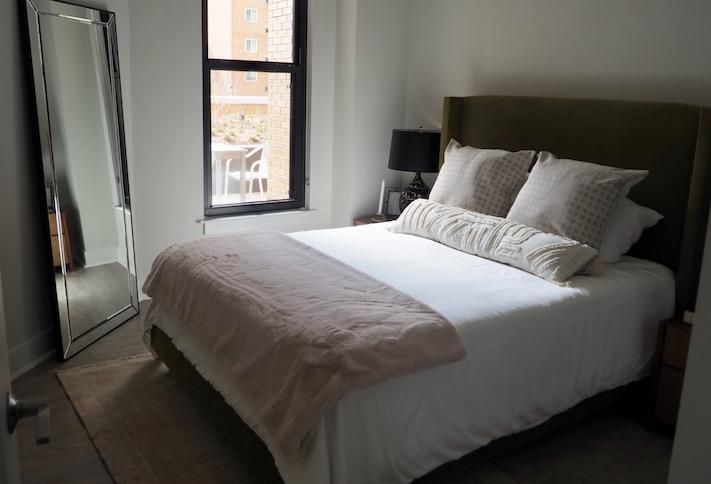 Bisnow/Jon Banister
The bedroom in a model unit in the Avec building.

As of Friday, WC Smith had leased 11% of the building's 419 apartments, WC Smith Property Manager Kaitlyn Tumminello said. Thus far, renters have been drawn to Avec because of the nearby retail offerings on H Street — especially Whole Foods — and the proximity to Capitol Hill and Union Station, she said.

"What's cool about H Street is its authenticity, people are attracted to that," Tumminello said. "Fourteenth Street and Dupont Circle can be out of some people's price range. This is an option that's not as expensive, and you can walk to bars and restaurants."