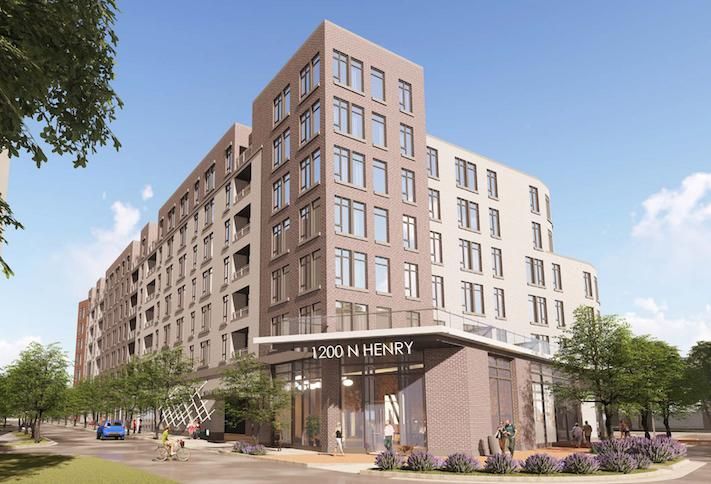 Courtesy of Avison Young
A rendering of the development planned at 1200 North Henry St. in Alexandria

Three years after buying an Alexandria development site where it planned an apartment project, Avanti Holdings Group is selling the property.

The developer sold the site at 1200 North Henry St. to NOVO Properties, which is moving forward with plans for a 115-unit project, Avison Young principal Jon Goldstein said.

Goldstein said NOVO aims to break ground in spring 2020 and deliver it less than two years later. The price of the land sale was undisclosed.

Avanti paid $4M in 2016 for the site, occupied by a warehouse. It brought plans before the Alexandria Planning Commission last year for a 115-unit building with ground-floor retail.

Capitol Hill-based NOVO is now moving forward with the same plans and needs final site plan approval before breaking ground. NOVO was interested in the site primarily because of its proximity to Amazon HQ2 and the future Virginia Tech campus, Goldstein said.

The property sits less than a half-mile from the Braddock Road Metro station, one stop south of the future Potomac Yard station where Virginia Tech is planning its new campus. The two stops north of that are Reagan National Airport and Crystal City, where Amazon is leasing space for the first portion of its second headquarters. In the other direction, the development site is less than 1 mile from Old Town Alexandria's King Street retail corridor.

"It's a market that historically has done well with strong demographics, which should only get better with high-paying jobs coming in from Amazon and the Virginia Tech campus," Goldstein said. "It's going to be a natural beneficiary of people moving into the area."