How the Developer of DC's Largest Multifamily Project Got Started

MRP Realty is about to embark on DC’s largest residential development in years, right next to the Rhode Island Avenue Metro station. The 1,550-unit, seven-building Rhode Island Avenue Center is just the latest in a string of major projects for the 10-year-old developer in up-and-coming areas. 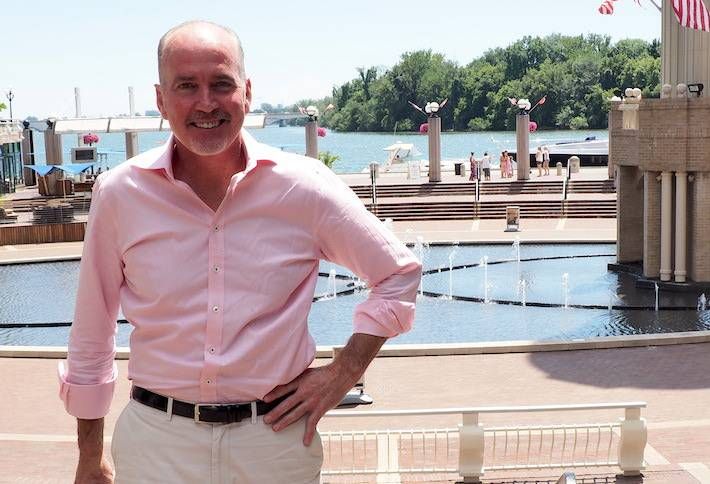 Rhode Island Avenue Center will be built in four phases with between 140k and 200k SF of retail, says MRP managing principal Bob Murphy, whom we snapped yesterday at the Georgetown Waterfront. It’s a pedestrian bridge away from the Rhode Island Avenue station nestled against the Metropolitan Branch Trail. Phase 1 will be 345 units and include a health club. It’s being jointly developed with the landowner of the current retail center, B&R Associates, which has owned the property for decades. Bob expects construction to begin, after a PUD process, within 18 months. 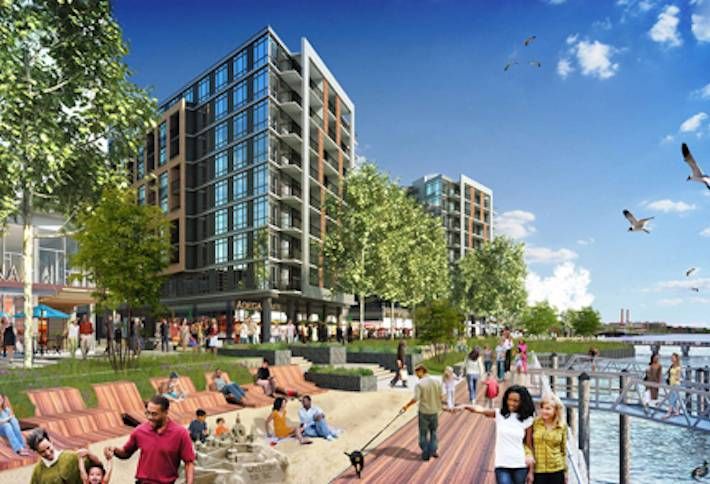 MRP used to own the Georgetown Waterfront, where it now leases office space. Defining moment: April 18, 2011, the day the Waterfront flooded. Bob and his founding partners, Ryan Wade, Frederick Rothmeijer and Richard Saas, were up all night pumping water out of the parking garage and trying to manage and assess the damage. On April 19, the partners had a pitch meeting with Florida Rock Properties, owners of waterfront property near the Navy Yard. Bob tells us they almost canceled. “I thought the company was at risk,” he says. Instead, they won the rights to develop the land into Dock 79, a 305-unit luxury apartment building (rendered above) and extend the river esplanade Forest City Washington started at The Yards. The second phase of the project will likely start once the first phase has delivered (expected next year) and is partially stabilized. The third and fourth phases won't be built until the new Douglass Bridge is complete, but meantime a temporary use for the land is in the works. Spoiler alert: It will involve beer. There will be much rejoicing. 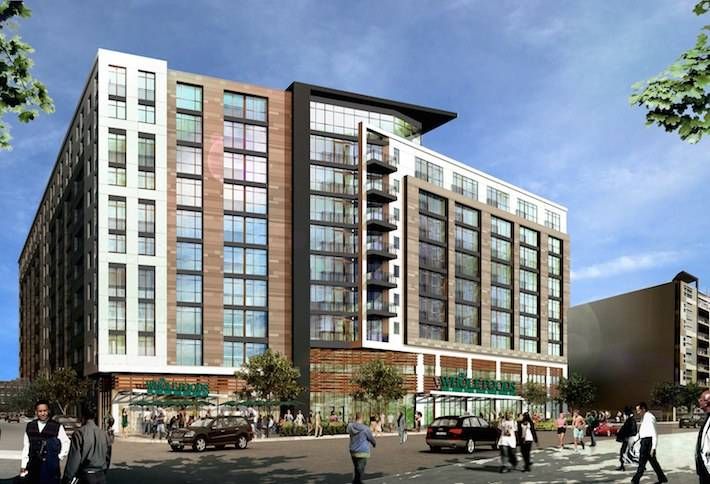 Pick one of the hot spots in the District for development, and MRP has a project of significance there. U Street? MRP has a JV with JBG for a Whole Foods-anchored mixed-use project on District land (above)—currently held up in a late-inning price dispute with the DC Council—with 30% affordable housing at 30% AMI. H Street NE? They’re developing there, too—125 units on a vacant lot across the street from the Giant. “I love that area,” Bob says. “It’s like 14th Street but a little more Millennial family-focused.” In NoMa, MRP’s Elevation at Washington Gateway leased up 95% of its 400 units in 11 months, a pace that surprised even the building’s developer. “We were all blown away,” says Bob. Buzzard Point is an area of interest for future development, and MRP is working with a landowner—more details couldn’t be disclosed—to build something near the future DC United stadium. MRP also recently finished the development of 900 G St NW in the East End with partner ASB Realty, and the building delivered 75% leased before it was ready to reopen. 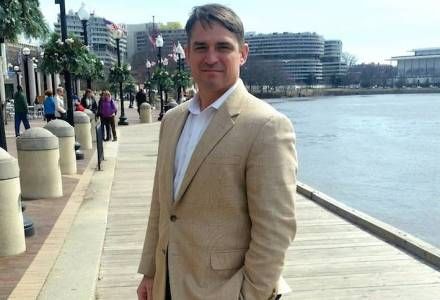 For a company that started in 2005 and had just 12 people when the recession hit in 2008, the growth has been astounding. All of the 12 partners and employees agreed to take a pay cut to wait out the recession, and before the market turned, MRP started buying up property. MRP principal Zach Wade, whom we snapped this spring, compared the most recent recession to those in the late ‘80s and ‘90s and saw the market’s rapid bounce-back potential. In 18 months between mid-2009 and the end of 2010, the firm did $500M in deals, Bob says. It bought The Hartford office building in Clarendon in late 2009 for $72M and flipped it for $112M at the end of 2010. MRP's partners agreed to take almost all of their cash from these deals and reinvest. The firm then bought the Georgetown Waterfront in 2010 for $245M, retained tenants after the 2011 flood, redid the retail and added signature restaurants like Farmers Fishers Bakers and Fiola Mare, and sold the property for $372M in 2013. MRP now counts 125 partners and employees. The partner list has grown from the initial four to nine, partly because Bob says they don’t quite offer the salary as other firms, but do offer far more ownership possibilities. “I expect 10 years from now, I’ll own a lot less as we expand our partnership base. We attract people who have a longer-term vision.” 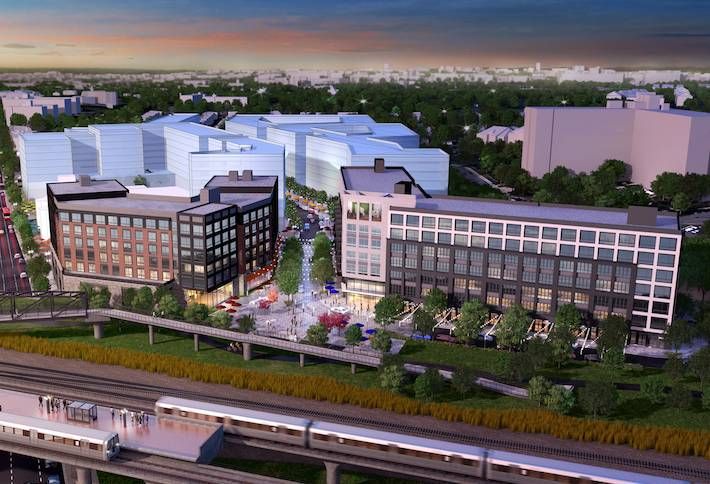 The other key to MRP’s success: diversity. In addition to the mixed-use developments in the District we already highlighted, MRP owns its fair share of offices in the Virginia and Maryland suburbs. It has an office property management division, managing its own 3M SF of offices and 5M SF for other property owners. It owns MRP Industrial, based in Baltimore, led by Dan Hudson and Reid Townsend, currently developing 3M of warehouse space. It also owns 23% of co-working firm UberOffices, and the two are working together on upcoming deals in Philadelphia, Chicago and LA. MRP’s growth in DC has prompted the first looks outside the region, in Philly and New York, but those deals are farther away. But as they explore other locales where Bob has roots—he was born in the Bronx, lived in Long Island as a child and spent his adolescence in Philly—Rhode Island Avenue (rendered above) will draw lots of attention. 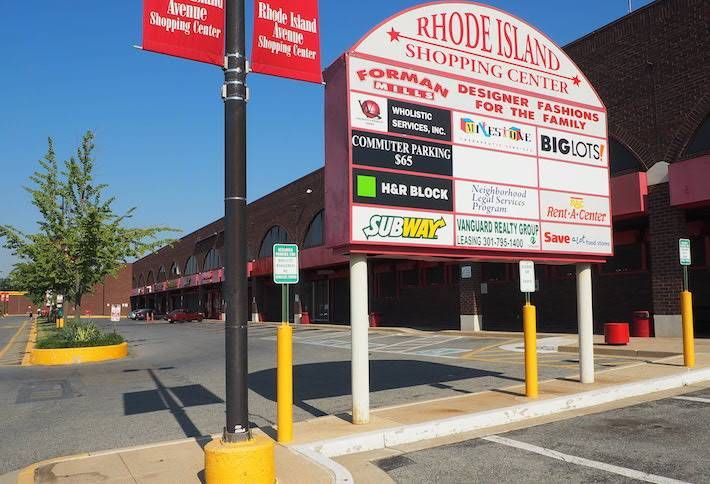 The current site: a strip mall with Big Lots! and Forman Mills with a large surface parking lot. Anyone who wants to enter the Metro today either needs to come from the north or south on the Metropolitan Branch Trail or walk through the shopping center. “It’s really great real estate,” Bob says. On the other side of the tracks, Douglas Development's building 295 units in two connected buildings. Next door, a 116-unit affordable housing project is under construction. “I expect over time that whole area is going to be redeveloped,” Bob says. 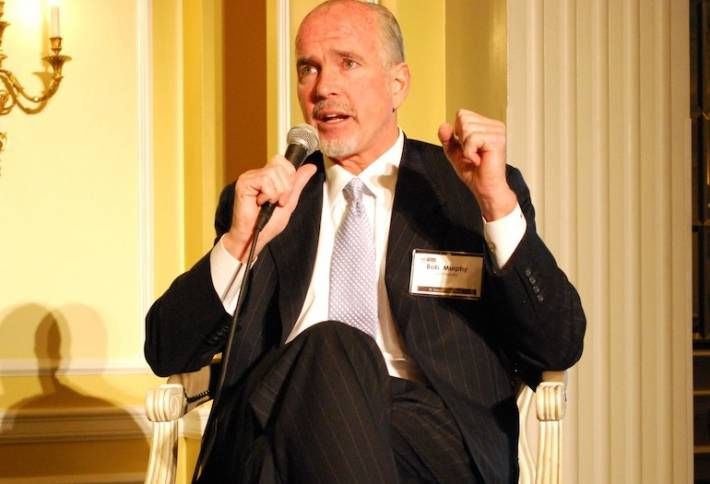 Bob is an avid cyclist—although that’s on a brief pause as he recovers from back surgery—and loves to ride the trails around DC. One of his favorite routes: a 15-mile loop that takes you along the MBT, down through H Street and Capitol Hill, all along the waterfront and back up through the District. “You can really see all of DC on the route,” he says. And at every stop along the way, MRP is building something new. The company started small, but its destiny was never to stay that way. “We came from a big company, and that’s what we’re used to,” Bob says.