Til, Milt, and the Slipper Test

If you can walk out your front door in your slippers and grab a cup of coffee from the local coffee shop, then you're living in a community that passes the slipper test. That's one of several new commercial real estate standards we learned about at Bisnow's Northern Virginia State of the Market at the Hilton McLean. 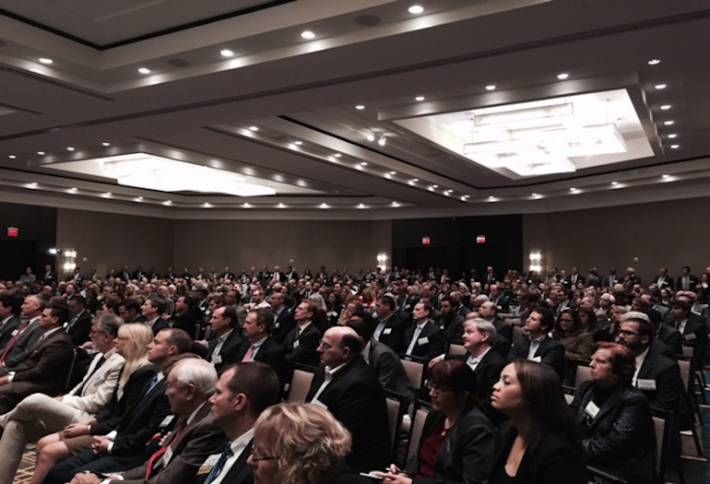 Over 600 joined us for the event--a part of our United Bank Neighborhood Series--to hear from real estate legends, analysts, developers, tech entrepreneurs, politicians and brokers. 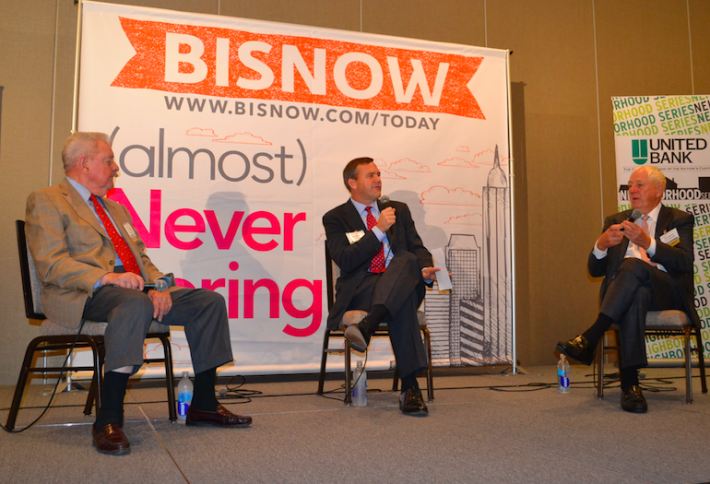 Not many folks in the DC region can say they knew the intersection of Route 123 and 7 in the '60s. But real estate legends like Til Hazel and Milt Peterson certainly can. They kicked off our event with a fireside chat led by Milt’s son, Jon Peterson, who helps lead the development firm. Milt and Til have been responsible for building a good chunk of where Northern Virginians lay their heads at night, as well as where they make a living. But both expressed deep concerns about the region’s future. The crowd clapped thunderously when it heard Til was actually marking his 85th birthday, and leapt to its feet to give Til and Milt a standing ovation at the end, as if to say these icons really do represent modern Washington's greatest generation. 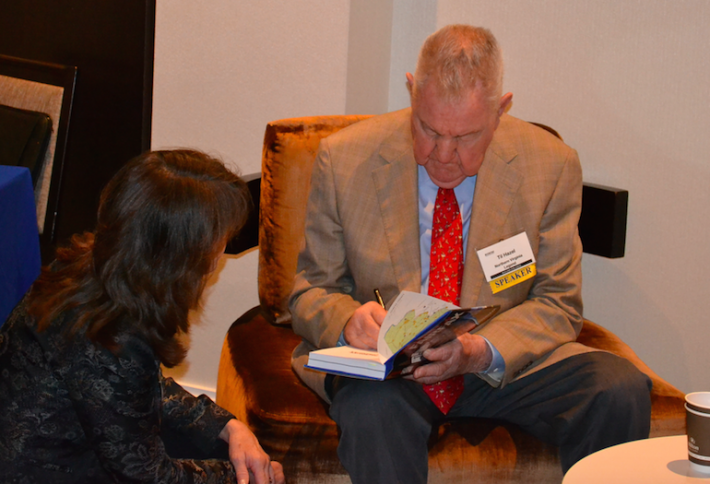 Til, signing autographs before his chat, urged the business community to get involved in the political process, especially when it comes to the issue of traffic. He spent a career as an attorney and developer with Milt, and many years battling with what he calls the “anti-growthers.” That included opponents of  projects that today help the region thrive, like the Fairfax County Parkway, which connects Til and Milt’s Burke Centre and Fairfax Station neighborhoods. Til said the region is in desperate need of another bridge, a comment that was met with raucous applause. 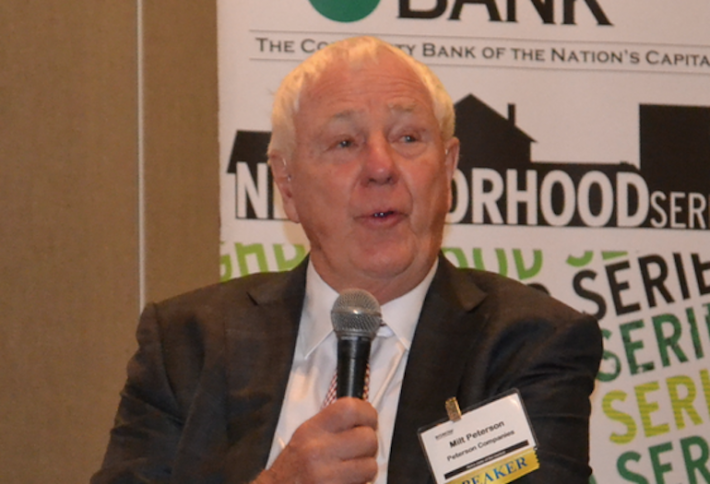 Milt, whose firm is celebrating 50 remarkable years as a DC-area developer, says anti-growth got in the way of his vision at times, including his plans for Virginia Center. The 58-acre site, near the Vienna Metro station, was originally modeled after Reston Town Center but ended up with just townhouses. Milt and Til are also concerned about housing proffers and the $50k (on average) tax levied per home that gets passed down to homebuyers. Milt says the business community should also support the region’s institutions like Inova, George Mason University and the airports. Like a father sending his child off to college, Milt told the crowd, “You have a great opportunity, so don’t screw it up.” 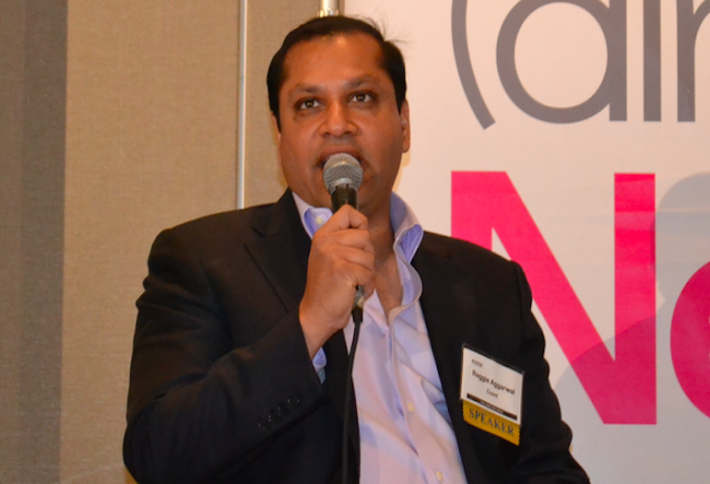 One of NoVa’s new institutions is Cvent. Founder Reggie Aggarwal, interviewed on stage by his broker, Cushman & Wakefield vice chairman Paul Darr, shared the story of how his company, during one of its lowest points, teetered near bankruptcy. A clause in its lease said the landlord could accelerate 48 months of rent if the company missed a month. The team was reduced to 26, yet with 35k SF and a yearly rent of $900k. Revenue was only $1.5M. Reggie worked out a deal with the landlord, but was forced to sign his own name on a new lease. 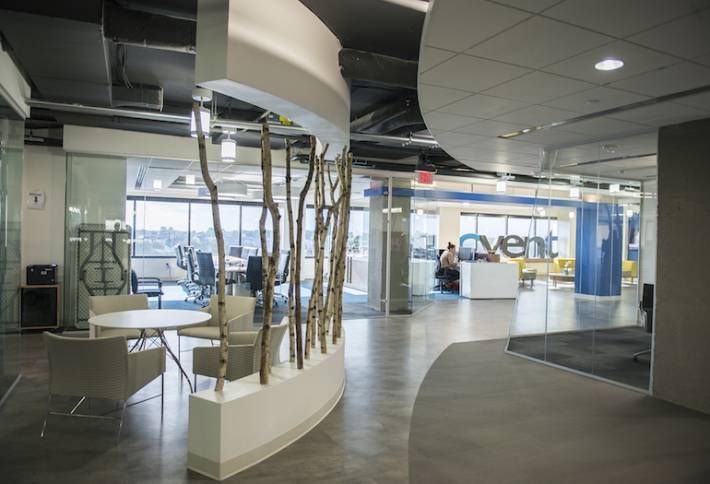 Now the publicly-traded company is 2,000 employees strong, situated in 270k SF around the world (130k SF in Tysons). The company moved into SAIC’s old HQ 18 months ago. After calculating that head count would grow 35% to 40% annually, Reggie required the space be open, with high ceilings, natural light and lots of glass. The executive offices are on the interior with cubicles closest to the windows. The location was also chosen because of its proximity to Metro, although Reggie says only a third of employees--primarily Millennials--are using Metro. Now his biggest concern is the 30% to 40% spike in wages over the last year, especially for software engineers. Silicon Valley firms like Google and Facebook are driving up those wages as they come to the DC area offering six-figure salaries, even for kids fresh out of college. 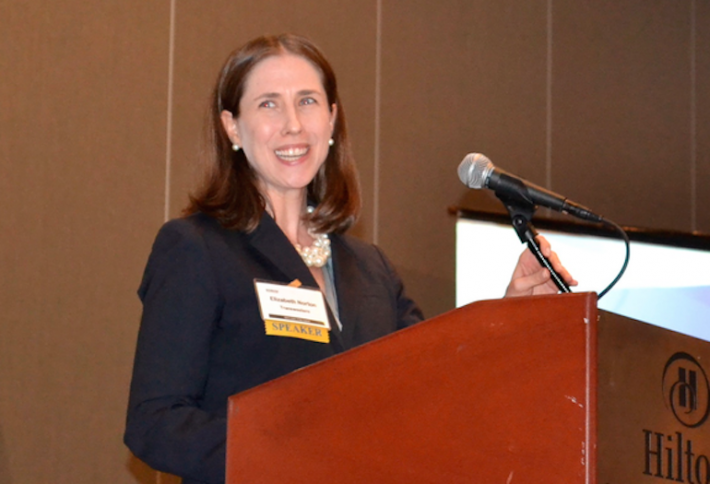 The good news for the region, especially Northern Virginia, is that jobs will continue to grow into 2016, says Transwestern analyst Elizabeth Norton. She says the region will add 48,000 new jobs per year for the next five years, with 21,000 of those being added in NoVa. The fastest-growing sector is professional business services, with 30% of those jobs being in tech. Cybersecurity and cloud will dominate, outpacing NYC and San Fran. But the federal government, which dominated NoVa’s industry for decades, won’t ever be what it once was, says Elizabeth. The private sector will have to pick up the slack. Elizabeth adds the region’s highly educated workforce will be one of the drivers. 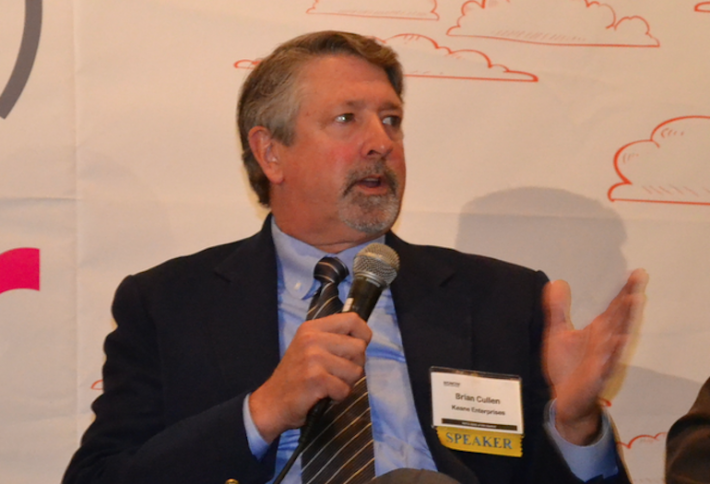 Some of Northern Virginia’s growth will come from Millennials coming to live and work in the suburbs. (And you thought they only wanted true city life.) Keane Enterprises founder Brian Cullen says developments like Keane’s Willowsford in Ashburn is all about the “non-sellout” suburban experience. His development in Loudoun includes a working farm that provides fresh food for residents and miles of trails and campgrounds. At least 20% of buyers so far are Millennials. Brian says this generation will act more like previous generations than we actually think. 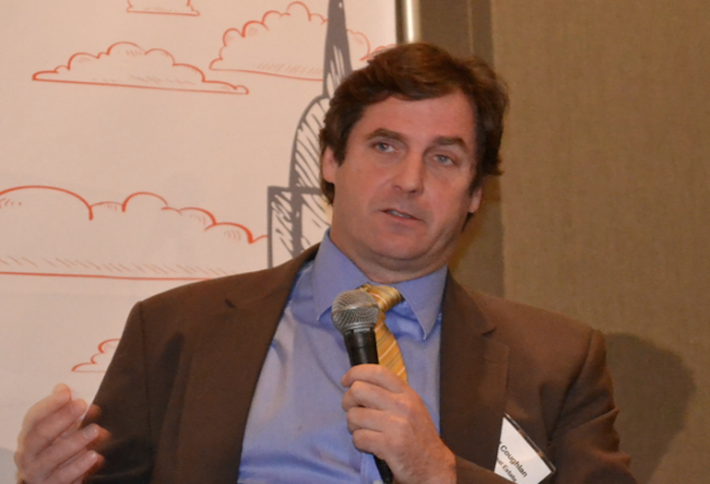 Tritec principal Dan Coughlan, whose company is developing Kincora (424 acres in Loudoun), says the Silver Line isn’t necessarily attracting the Millennials. He says at best, 10% of the population will use it for commuting. Think of it like an apartment complex pool–people like to see it, but they probably won’t use it much. What is happening is that it’s getting harder to finance mega projects that require $200M worth of roads and other infrastructure. Banks and insurance companies are out of the game and Wall Street equity funds really want to see their money back in three to seven years. His company worked with state and local government on creative financing. 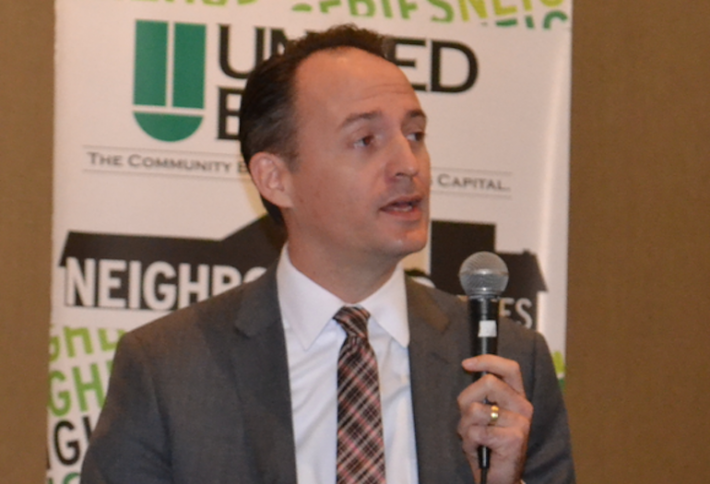 We hadn’t heard of the slipper test until Combined Properties VP Randy Kenna told us how the company uses it to determine if a mixed-use project is truly urbanized suburbia. It's all about not having to get in your car for many of life's essentials. Combined is focused on attracting Millennials to mixed-use projects that provide that urbanization and a sense of place. So that may mean bringing in a neighborhood brew pub or some other amenity that brings some recognition to that community. 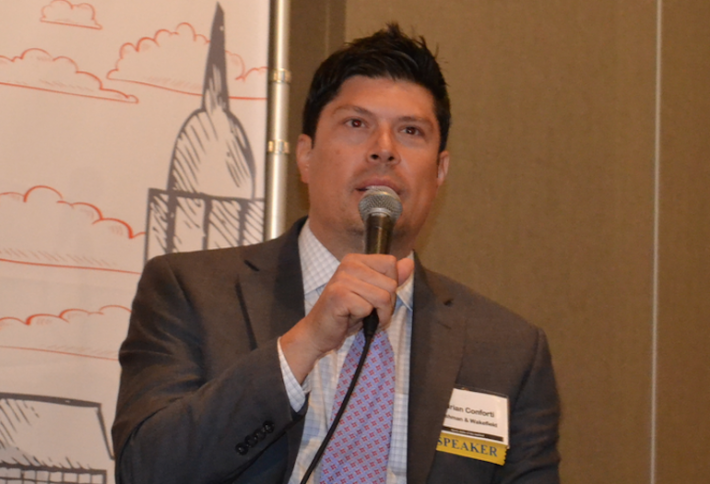 That sense of place is also happening within office spaces, says Cushman & Wakefield senior managing director Adrian Conforti. Some of the amenities he’s seeing are caffeinated ping-pong rooms and Nintendo Wii bars stocked with beer. He also says big conference rooms are being replaced with huddle rooms that can fit four to six people. 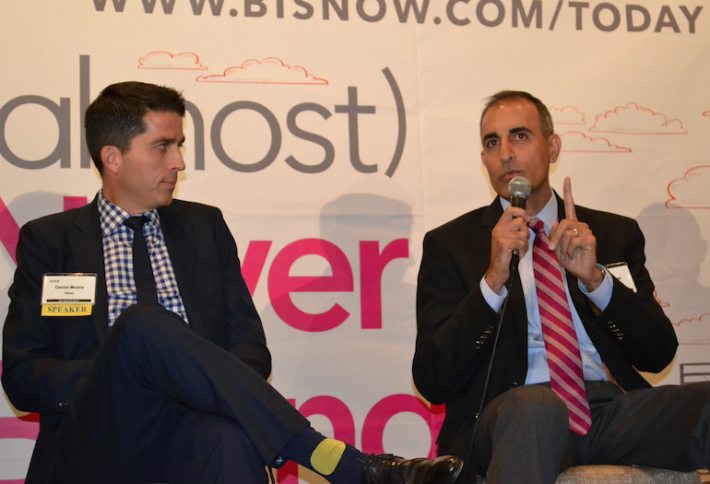 Arlington is full of that sense of place, but Kettler SVP Asheel Shah (right) says the submarket needs a transformation. Kettler has built six high-rise apartments in Arlington, but he says government dysfunction has held Arlington back. Arlington economic development director Victor Hoskins, who also spoke at our event, says the local election next week will be a step toward change in Arlington. One shining light is Rosslyn, says Hines managing director Dan Moore. Despite a lagging office market, Dan says he’s bullish on all of NoVa. 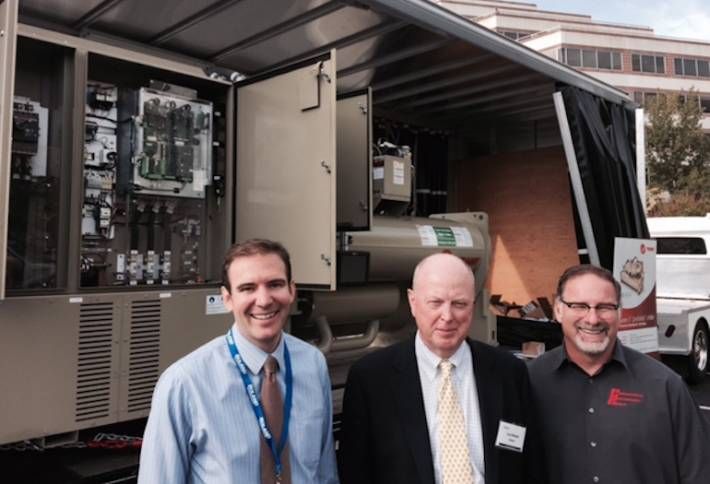 It's not only Peterson's 50th anniversary this year, but Boland's. The king of energy-efficient HVAC in the region, it's the one called upon to provide cooling by no less than the Kennedy Center, Reagan Building, Fed Ex Field, Nats Park, National Airport, and even the Washington Monument. To help our attendees visualize their products, Lou Boland, center, and his colleagues displayed a 300-ton Trane chiller in the parking lot before and after our program. (The core chiller component is the tubular contraption on the right, and its computer brains are on the left. You need to thank it, and them, for making DC summers bearable.)