More Developers Are Trying To Cash In Their Amazon-Adjacent Buildings

An office building and an apartment building near the future Amazon HQ2 campus in Northern Virginia have recently hit the market, the latest in a wave of property owners looking to cash in on rising values from the tech giant's arrival. 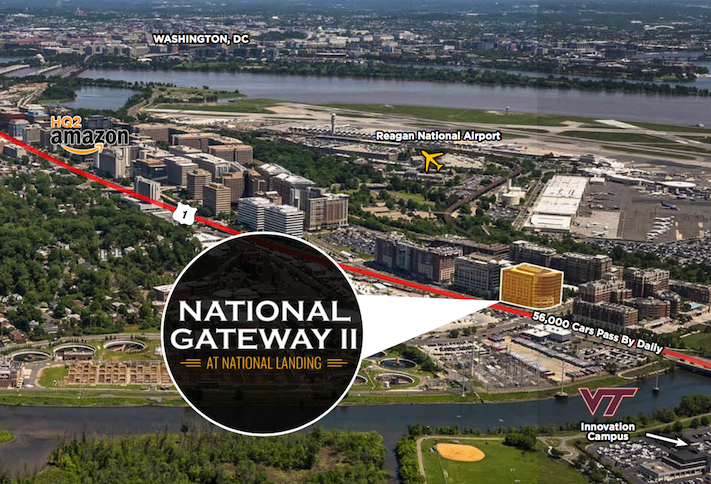 Kettler retained CBRE to market the m.Flats Crystal City apartment building, according to a property listing on the brokerage firm's website. A CBRE spokesperson tells Bisnow the property is under contract and a sale is expected to close later this month.

Marketing brochures for both properties prominently feature Amazon HQ2 as a key selling point. Amazon is beginning moving employees this year into leased space in Crystal City, and it plans to grow its workforce at the campus to at least 25,000 over the next decade.

The property at 3550 South Clark St. in Arlington is part of a two-building spec office development that Meridian Group delivered in 2010. The Meridian Group co-founder Bruce Lane tells Bisnow it also retained JLL to sell a development site next to the National Gateway II building that could support 518K SF of office space.

"There has been a transformation in that whole National Landing area because of Amazon and all the jobs they're going to create," Lane said. "Local landlords there have been raising rents because of it, so the assets there are [priced] much higher than they were a year ago." 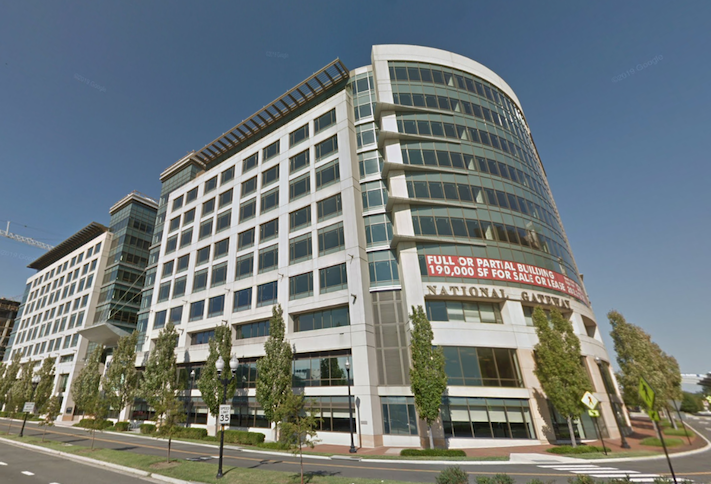 Collins said he expects the proximity of Amazon HQ2 will create a 10% to 15% bump in sale price for National Gateway II, consistent with what he has seen across the market. The property also sits near the site Virginia Tech announced Monday it selected for its new innovation campus.

"That's been the biggest news we've had in that corridor for a while, and if you add Amazon and the Virginia Tech campus together, it can obviously be a real positive in terms of leasing," Collins said. "It can also be a positive if you have another user who wanted to own."

If the National Gateway II building sells to a company that intends to occupy it, as Collins suggests it might, it would follow in the footsteps of its neighbor. German grocer Lidl in 2015 acquired National Gateway I for $77M and occupies the entire 217K SF property, which serves as its U.S. headquarters.

National Gateway II has plenty of space available for a company to fill. The 238K SF office building is 26% leased, leaving over 175K SF of vacant space. Some of that vacant space was used to host Bisnow's Amazon HQ2-Apalooza event in February, where Collins moderated the keynote interview with Amazon Head of Worldwide Economic Development Holly Sullivan and JBG Smith CEO Matt Kelly.

Cushman & Wakefield is using the vacancy as a selling point in its marketing strategy. In addition to providing space for a user that wants to buy the building, Collins said it also creates opportunity for an investor to acquire the property and add value by leasing it up.

"It's an opportunistic play for people," Collins said. "If you look out there, the largest pools of money that have been raised have been for those types of opportunities, home runs and triples, and that's what you have here." CBRE
A map from the m.Flats Crystal City marketing brochure highlighting its proximity to Amazon HQ2

Kettler in 2017 delivered m.Flats at 505 18th St. South. The building sits about two blocks from the Crystal City Metro station, where Amazon has leased 585K SF of office space for its initial HQ2 offices.

The 198-unit apartment building is 93% leased, according to CBRE's marketing brochure. The average unit size is 829 SF, and the average rent is $2,336/month for a unit and $2.82/SF, according to the brochure.

Kettler declined to comment on the building hitting the market and going under contract, and CBRE declined to name the buyer or sale price. Kettler CEO Bob Kettler, speaking with Bisnow in December before the building hit the market, said he believes Amazon's arrival will escalate apartment rent growth in the area.

"We think it’s going to shift the center of gravity of the subregional neighborhood, and if you look at rent differentials from The Wharf and other areas on the waterfront, the ballpark, there’s a gap between that and Pentagon City," Kettler said at the time. "Right now, Pentagon City and National Landing are a value play, and I think that’s going to evaporate."

The two properties hitting the market and going under contract follow the sales of two other National Landing properties last month.