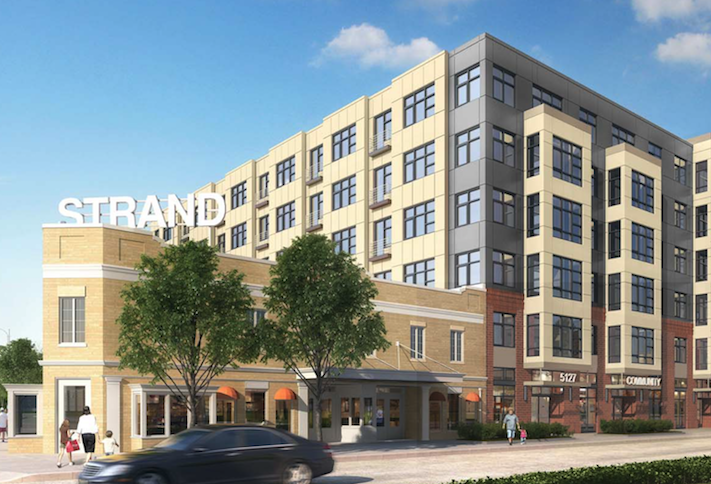 PGN Architects
A rendering of The Strand Residences project in Deanwood, an affordable housing mixed-use development

An affordable mixed-use project in Ward 7's Deanwood neighborhood has received financing from the D.C. government.

The D.C. Housing Finance Agency announced Friday it provided $19.5M in bond financing and underwrote $12M in Low-Income Housing Tax Credit equity for the project that will create 86 affordable apartments.

The $37.6M project, branded as The Strand Residences, is being led by The Warrenton Group, The NHP Foundation and WA Metropolitan CDC, with PGN Architects designing the building. The team will develop a new, six-story multifamily building next to the historic Strand Theater on the corner of Nannie Helen Burroughs Avenue and Division Avenue NE.

The Warrenton Group is also renovating the theater and turning it into retail space. It recently finalized an 8,800 SF lease with Ivy City Smokehouse to open its second location in the historic theater building, CEO Warren Williams tells Bisnow. The restaurant's first location at 1356 Okie St. NE was included in the Michelin Guide's Bib Gourmand list of D.C.'s top restaurants with relatively affordable prices in 2017.

"The fact that Ivy City Smokehouse decided they would make an investment to come to the Strand proves that Deanwood has officially arrived," Williams said. "It's a viable location and destination in the District, and that's what we always hoped for. We can't wait to keep the momentum going."

Williams said the team plans to hold a groundbreaking celebration later this month. He expects the apartment units to deliver in January 2021, and the restaurant could potentially open in the theater building before the end of 2020.

The DCHFA deal is only financing the new ground-up building, which will include an additional 2,450 SF of retail. Its apartments will consist of 71 one-bedroom units and 15 two-bedroom units.

The Office of the Deputy Mayor for Planning and Economic Development is also partnering on the project, which is part of D.C.'s New Communities Initiative. Twenty-eight of the project's apartments will serve as replacement housing for the nearby Lincoln Heights public housing project, with the units reserved for those earning up to 30% of area median income. The remaining 58 apartments will be set aside for households making up to 60% of AMI. The building will have a gym, a library and two multipurpose rooms as resident amenities.

The Warrenton Group is working on three other developments in the Deanwood neighborhood: the 530-unit Kenilworth Courts redevelopment, the 150-unit Deanwood Hills affordable project and the 183-unit Deanwood Town Center, which sits across the street from The Strand Residences.

"I was always amazed at the beauty of the Deanwood neighborhood, just how wide the street grids were and the trees and the parks," Williams told Bisnow last year. "The proximity to Metro and to downtown also were some of the reasons why that sleeping giant of a neighborhood was really attractive to me."