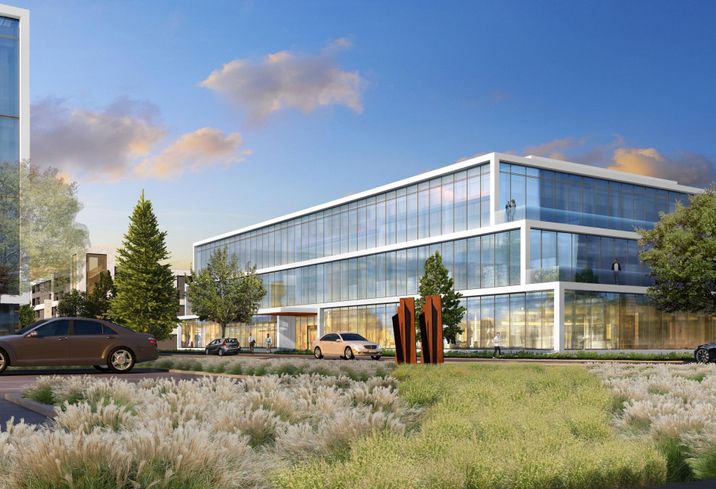 Like most of the rest of the greater Bay Area, Silicon Valley is enjoying a commercial property boom amid persistent struggles to produce adequate housing.

While the South Bay produced just 3,000 homes last year (as Google recently pointed out in announcing its $1B housing pledge), the region's office vacancy is 6.9% (the lowest since 2015), average annual asking rent for office is $53.64 per SF and there is 7.5M SF of office product currently under construction, according to a report by Colliers International.

And nowhere is the commercial boom more pronounced than in Sunnyvale, the home of three of the five largest projects in Silicon Valley as well as a transforming new business district, Peery Park.

The northern Sunnyvale area is reflective of the overall region's strong office market, and dominating much of the area is Irvine Co.'s Pathline Park project, one of Silicon Valley's largest under construction at 1.3M SF. What is affecting the market and the demand for projects will be discussed at Bisnow's Silicon Valley Construction & Development Summit July 11.

While not quite open yet, Irvine Co.'s 11-building megaproject is already about 50% leased. Software company Synopsys signed on for three whole buildings, adding up to about 360K SF, in 2017, while cybersecurity company Proofpoint jumped aboard last year, pre-leasing a total of 242K SF in two buildings.

Irvine Co. Regional Vice President Todd Hedrick sees demand continuing for the remaining six buildings, three of which are scheduled to be completed in October at over 100K SF each. He said he has gauged strong interest both from companies already in the South Bay and those farther up the Peninsula.

"We've had a lot of really good activity and a lot of touring activity," Hedrick told Bisnow, adding that Irvine foresees Pathline's next few companies leasing a building apiece.

Pathline and the rest of the district's proximity to transportation nodes is a major selling point for Irvine and other Peery Park developers, Hedrick said.

Peery Park is right below CA 237 and US-101 and directly above the regional thoroughfare that is the Central Expressway. It is also near Mountain View's and Sunnyvale's Caltrain stations.

The company's asking annual full-service rent is $59.40 per SF for the remaining buildings, Hedrick said. Synopsys grabbed all of Phase 1 and will move into its new space later this year. Proofpoint's new office space will open in Q4 2020.

Pathline is just the biggest of a handful of large-scale office projects slated for the area designated under the Peery Park Specific Plan crafted by the city in 2016. Irvine Co.'s project accounts for over half of the roughly 2.2M SF commercial space envisioned by the city for the 450-acre district, which already includes space occupied by the likes of Apple, LinkedIn and other big names. 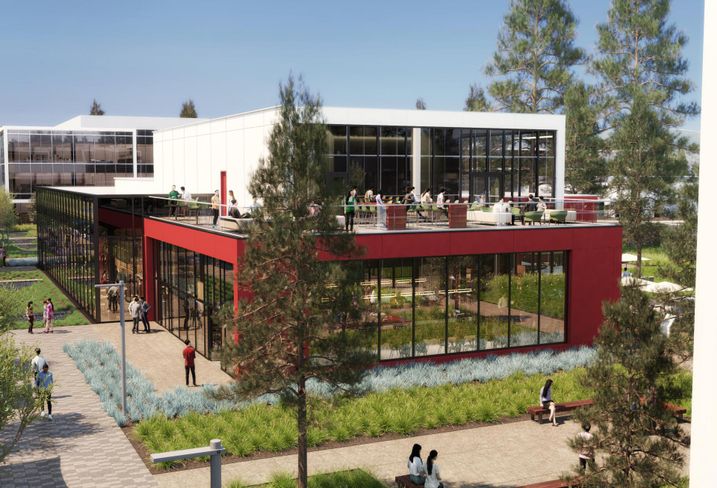 Courtesy of Irvine Co.
A rendering of the Pathline Park amenity building, which will include a full-service cafe, fitness center and other space.

The intensifying level of commercial property development for Silicon Valley begs the question of when the region's multifamily sector will follow suit.

Santa Clara County currently has nearly 12,000 units under construction and over 23,000 units planned, according to Cushman & Wakefield. But rent in the state's sixth-most populous county continues to climb, affordability suffers and developers struggle to keep up for a number of fundamental reasons, according to Nathan Ho, the Silicon Valley Leadership Group's senior director for housing and community development.

"Projects I've seen that have stalled in [determination] have not done a good job in outreach to the community, outreach to elected officials and outreach to city staff," Ho said. "Those are probably the three large stakeholders in that determination bucket that need to get on board."

Ho describes the South Bay's lack of developable land — due partly to zoning — as well as the Bay Area's astronomical construction costs as the other two culprits.

Some developers have managed in spite of the difficult climate and will soon reap the high rents and strong demand of the Silicon Valley multifamily market. SummerHill Apartments is two years into construction on 994 units in Milpitas, a development it calls Nuevo. Sand Hill Property Co. appears to be on the precipice of starting its massive downtown Cupertino development that would entail 2,402 housing units and 1.8M SF of office, although a new city council has seriously thrown the major specifics — and groundbreaking — of the plan into doubt.

Time will tell whether more Silicon Valley developers and city governments can overcome the dirt, dollars and determination conundrum.