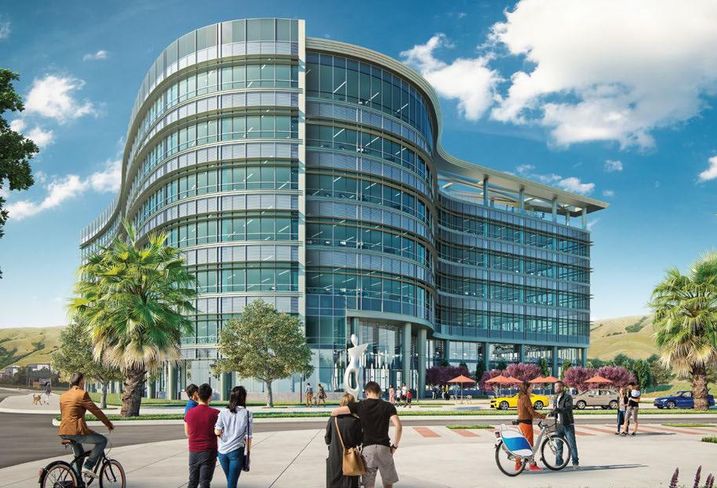 These projects are part of Union City’s 120-acre Station District, which will transform former industrial land into a mixed-use transit-oriented development with 1,300 housing units. This site also was proposed as a secondary site for the Bay Area’s Amazon HQ2 bid, which was a partnership with Oakland, San Francisco, Fremont, Richmond and Concord.

Nearby Fremont and San Leandro are adding large transit-oriented residential and commercial developments near their BART stations. Fremont’s Warm Springs area near BART has about a dozen projects planned or in the works, including a 110-acre mixed-use development from Lennar.

San Leandro approved earlier in the summer the addition of 197 housing units next to Westlake Urban’s 750K SF office development. Construction on the residential portion could begin as early as spring. Westlake Urban also may consider adding a hotel or mixed-use office building in late 2018, according to the East Bay Times.

Woodstock Properties plans to build three buildings with six to eight stories and 57K SF floor plans in Union City. They will range from 350K SF to 450K SF each. The buildings also could be built into life science space. The project, designed by DES Architects, will include 40K SF of amenities, including a fitness center, retail, an amphitheater and gardens, and can accommodate about 5,000 workers. Woodstock Properties also plans to break ground on a nearby fully leased 31K SF project, designed by Ware Malcomb and built by contractor W.L. Butler.

Windflower’s second multifamily development at the Union City BART station will be nearly double the size of Union Flats, a 243-unit project it is building with CityView. The new 443-unit project, Windflower 2, will provide 11 lofts, 13 live/work units, 23 studios, 152 junior bedrooms, 32 one-bedroom, 122 one-plus bedroom and 90 two-bedroom units throughout six buildings. One building will be eight stories while the others will be five stories. A parking garage and over 5K SF of retail also will be part of the project. Some of the units will be built using modular pieces. This project is expected to be completed in 2020.