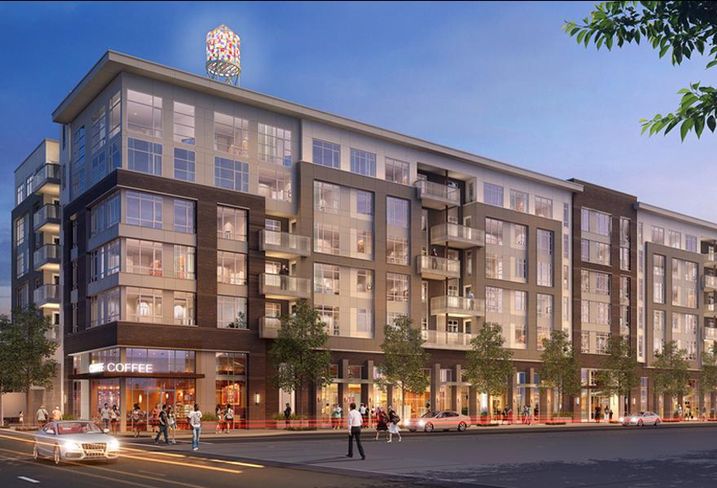 Courtesy of KTGY Architecture + Planning
Rendering of Alexan Webster, a project under development from Trammell Crow Residential, in Oakland

Trammell Crow Residential officially broke ground Wednesday on its first residential/mixed-use project in Northern California since re-establishing its office in the Bay Area. The $135M project at 2330 Webster St. will redevelop a 1.42-acre parking lot between Webster and Valdez streets into a mixed-use project with luxury apartments, retail, parking and art.

The project, dubbed Alexan Webster, is a public/private partnership between the city and developer and took four years of planning. As part of the agreement with the City of Oakland, Alexan Webster will designate 15% of its units as affordable to households earning between 50%, 80% and 120% of the area’s median income. It is expected to be completed summer 2019.

“I am pleased that the developer has made a commitment to provide a mix of market-rate and affordable housing that allows us to maintain economic diversity in Oakland — these are the types of developments we want and need,” Oakland City Council member Lynette Gibson McElhaney said.

The 234-unit community includes 15K SF of retail and a parking garage with 242 public city stalls and unbundled parking for residents. The complex will have a mixture of studios and one- and two-bedroom units ranging from 610 SF to 1,160 SF. The homes will include full-sized washers and dryers, gourmet-style kitchens with waterfall countertops and gas ranges, large picture windows and high-end fixtures and finishes. The apartment homes on the penthouse level will offer higher ceilings throughout the units and other upscale finishes.

The project, designed by KTGY Architecture + Planning, includes 5K SF of indoor amenities and leasing space, a lap pool and a rooftop deck with an art installation commissioned by Tom Fruin. The sculpture can be illuminated at night and seen from the ground as well as throughout the neighborhood, according to KTGY associate principal Jessica Musick. Community amenities also include a community center, a concierge, a business center, a 24-hour fitness center, an outdoor kitchen, a bicycle repair center and storage and a pet spa.