The Promises And Political Perils Of Chinese Modules

The innovative modular shipping container technology used to build 2711 Shattuck Ave. in Berkeley, a four-story, 22-unit housing complex, could end up being used for something much bigger in a large San Francisco neighborhood, as long as geopolitics don't get in the way. 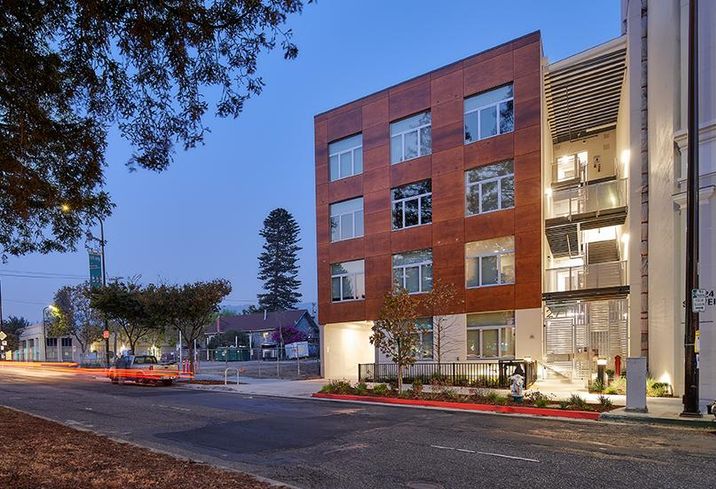 The Oakland-based architect, which worked with developer Panoramic Interests at its much smaller Berkeley project that opened last year, declined to name the developer but said CIMC MBS, a division of the massive Chinese transportation company CIMC, has the capacity to provide the necessary units.

"The factory that built the four-story one in Berkeley is capable of going high-rise with that same technology," said Lowney, a panelist at Bisnow's upcoming Bay Area Modular Construction Summit.

The elephant in the room, however, is cost, according to Panoramic Interests Director of Development Zac Shore. The developer has wanted to scale the method elsewhere, but tariffs on steel imposed by President Donald Trump since last March and anti-dumping measures implemented by the Department of Commerce have stalled any kind of plans, he said.

Panoramic, which is heading toward a groundbreaking at 500 Kirkham in Oakland, is ruling out using CIMC MBS' modules for any of the three buildings at the 1,032-unit project.

"Trump's tariff added 30% to the cost of the modules, but the anti-dumping thing adds 200% to the cost of the steel, which translates to about 45% to modules," Shore told Bisnow. "We're kind of standing by watching what happens, but there's no way we'd build that project utilizing the shipping container technology assuming the anti-dumping and tariffs remain the same, at which point we'll pursue other options or build it out of concrete."

Lowney and Shore, who are both optimistic about modular construction overall, said they were very pleased with the results of the Berkeley modules they designed and assembled. 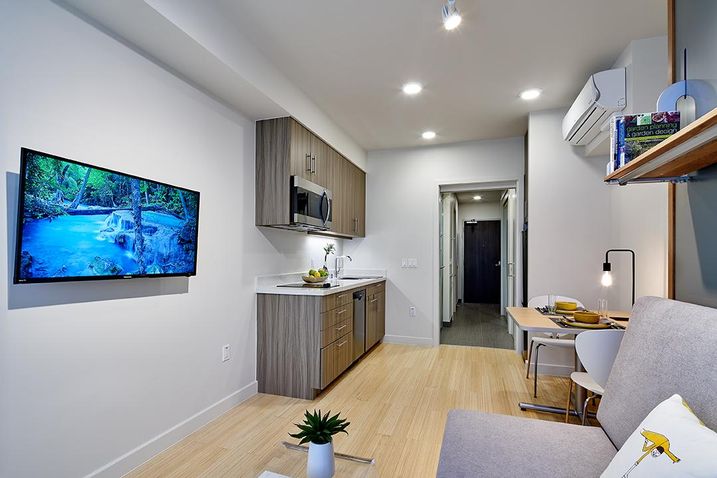 Courtesy of Panoramic Interests
An interior of 2711 Shattuck

At 8 feet wide, CIMC MBS' modules are the same width as an ISO shipping container. Once shipped into the Port of Oakland and transported to Berkeley, they took four days to assemble, and Panoramic has heard nary a complaint since, according to Shore.

"It's pretty wild," Shore said. "The quality was very good. Typically when we build site-built projects, we get a good bit of callbacks from the tenants whether it's a tub leaking or deficient appliances. With that project we've had zero callbacks."

With the federal government's policies as they are, new iterations are a "nonstarter," at least for Panoramic, Shore said.

But should costs eventually normalize, CIMC MBS' particular modular technology could be a major component in an overall modular construction industry many developers, architects and contractors feel would be aptly applied to the nation's housing crisis.

"Prefabrication can be a big lever in addressing the challenges in the Bay Area and Los Angeles," said Lockhart, another panelist at Bisnow's upcoming modular event. "You're taking advantage of factory labor not located in urban areas, and you're providing systems built for exceptional quality."

Glo Architecture principal Kevin Nivinskus, who has designed shipping container projects, said hesitant lenders are one of the few remaining barriers to all kinds of off-site construction.

"I've been working with very optimistic developers working with shipping containers or prefabricated steel connections, and a lot of it is getting lenders comfortable with the environment and paving the way for building confidence with that construction process," Nivinskus said.

However, more comfort is naturally coming with more data points, according to Darren Seary, director of Fulcrum, a construction risk consultant with expertise in modular construction.

"At the end of this project in San Francisco, if it goes forward, we will have proven a lot," Lowney said. "That's for sure."