Attracted by a business-friendly environment and desirable quality of life, growing startups are playing a leading role in the growth and prosperity of North San Diego County. Many of these startups, which include tech/digital, life science/biotech, action sports and cleantech R&D and manufacturing, are putting their production or research and corporate headquarters under one roof, setting off a boom in development of speculative industrial-flex projects, with a combination of warehouse features, creative office space and amenities for workers. 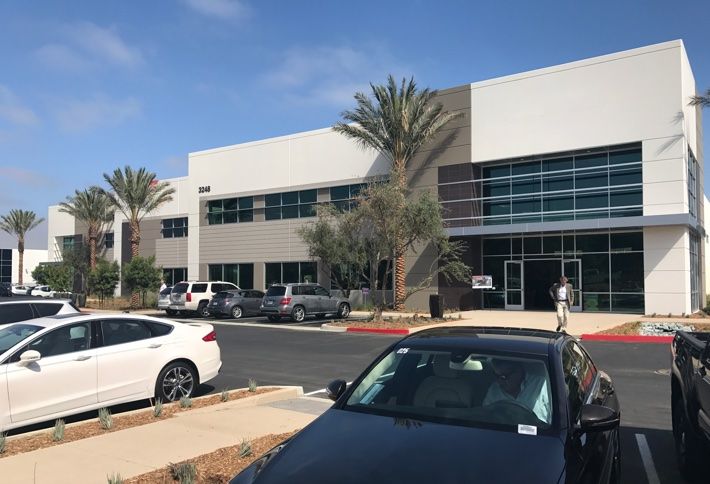 Locally based Badiee Development just completed construction of a 55,573 SF flex building in Carlsbad Victory Park at 3248 Lionshead Road, which hosted a Bisnow event Tuesday on The Future of North San Diego County. The building has features desired by users engaged in manufacturing, distribution and wholesale activities. 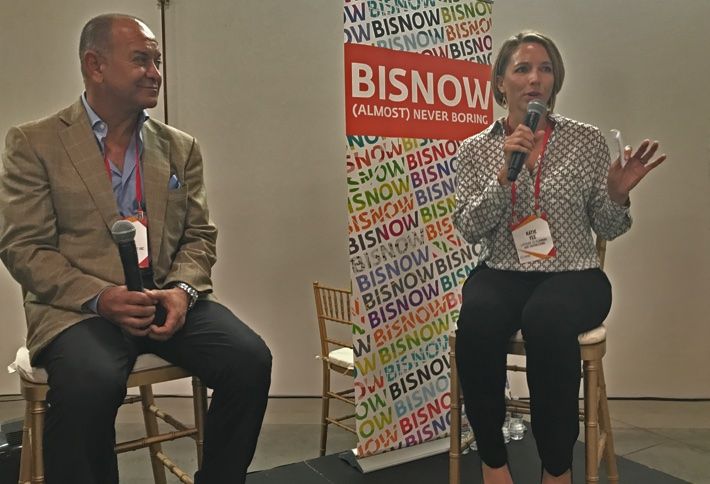 Ryan Cos. plans to break ground in October on Pacific Vista Commerce Center, a 400K SF logistics/distribution business park in Carlsbad that consists of three buildings, ranging from 75K SF to 220K SF. Ryan Cos.’ Western President Chris Wood said this industrial complex is designed to accommodate up to 16 tenants. 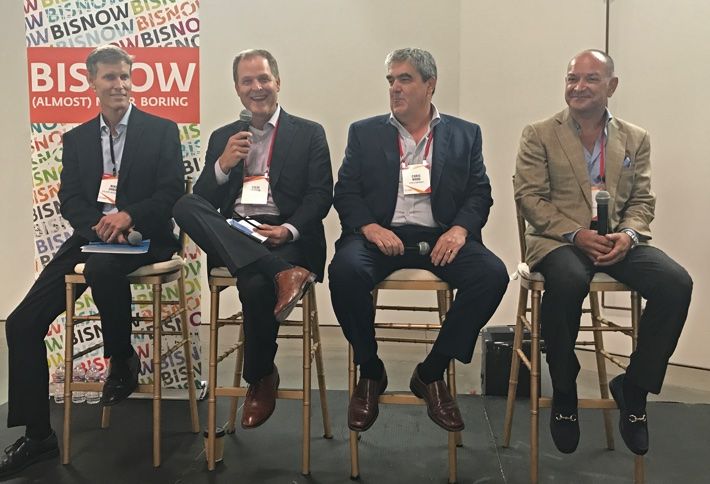 Erwin said Coca-Cola, which built a bottling and distribution plant in North County, did an analysis to identify which SoCal market would provide the greatest access to consumers in a region that includes San Diego, Orange, Los Angeles and Riverside counties and Northern Mexico. North County was chosen, because it has such diverse access to any one of those markets, he said.

The are other reasons North County is the hottest place in the county for industrial development.

“There’s migration from central San Diego and from Orange County and Los Angeles. There’s no land left in any of those markets, so we’re seeing companies that are looking for build-to-suit opportunities or way of life opportunities,” Erwin said. “They come here because there’s good housing, good schools and a diverse mix of employee talent.” 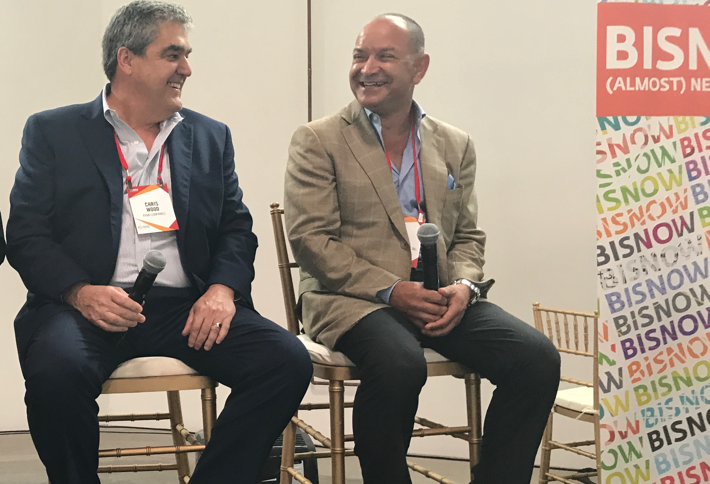 Wood said the North County region is benefiting from what’s happening in Poway, where General Atomics owns or occupies between 30% and 50% of available industrial space.

“They keep pushing tenants out, and your choice is either go to Otay (South San Diego County) or come to North County,” he said.

Two out of three end up in North County.

“Anecdotally, we’re working with a 100K SF user who needed a building up in LA, and the search was from south Orange County all the way north to Santa Clarita," Wood said. "We only found five buildings in a 400M SF market." 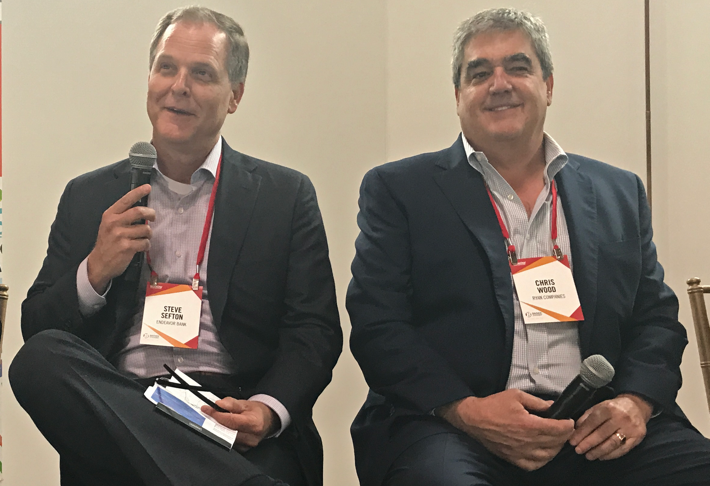 Patricia Kirk, Bisnow
Steve Sefton and Chris Wood have a laugh over an opening question at the Future of North San Diego County event.

Endeavor Bank President Steve Sefton said he is curious how much of North County’s growth is attributable to quality of life. He recently read an article by Alan Nevin, an economist and demographics expert, that said 75% of growth is only in a handful of markets and Carlsbad is one of them.

While the value of quality of life may be difficult to quantify, Carlsbad in particular has tremendous assets, Badiee said.

He said a software client that moved his operation to Carlsbad told him that a number of his employees already lived there and were willing to take a pay cut to work closer to home rather than commute. Badiee said some of the smaller companies come to North County for the diverse talent that resides there. 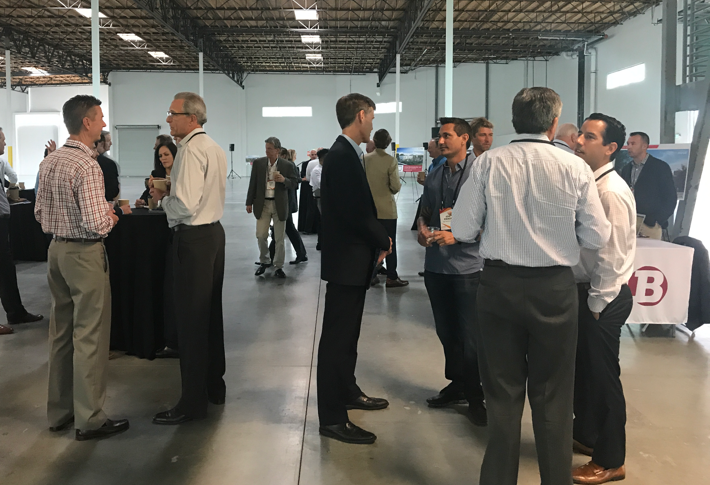 Carlsbad is the fastest-growing city in San Diego County, nearly doubling its population since 1990, from 67,833 to an estimated 112,310 residents in 2017. The city’s population growth is the result of a healthy economy that has made Carlsbad one of the 10 wealthiest cities in the nation, with a median household income of $105K.

Moderator Katie Yee, chief relationship officer at Latitude 33, wanted to know what type of tenant mix in going into North County industrial properties and how much of it is related to e-commerce.

“There is a diverse mix of employers in a lot of different industries. What’s driving employers here is the fact that we have a lot of opportunities in North County that not a lot of markets offer,” he said. 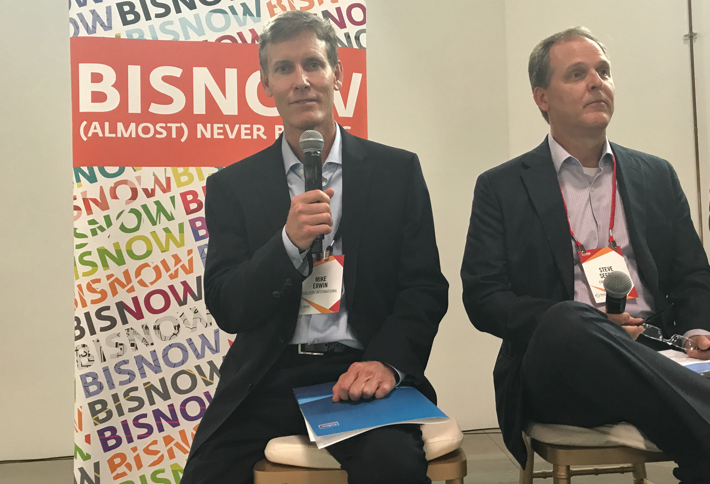 “What’s interesting about Carlsbad is there are a lot buildings breaking ground, but we’re not really competing that much with each other,” said Wood, noting each developer is focused on specific tenant types.

He said Badiee’s product is targeted at flex users and small tenants, while Adam Robinson at RAF Pacifica Group is building bigger single-tenant buildings for manufacturers and corporate headquarter users, and his company is building space for e-commerce users.

Badiee said many users would like to own their own buildings, but very few assets ever come to market. He said most owners are holding onto their assets because there is nothing for them to buy if they sell.

“The alternatives are so great, it’s either pay taxes on gains [or] do a 1031 exchange,” Badiee said. 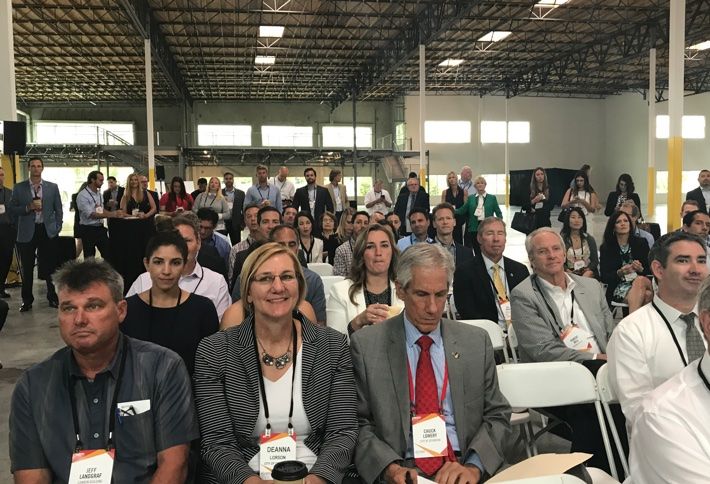 Wood said the recent boom in industrial development is the result of the region’s healthy economic fundamentals, which has had a positive impact on absorption of industrial space, driving vacancy down. Badiee said industrial vacancy is between 4% and 5%, and it is even lower in Escondido at under 3%.

“We were late getting started relative to LA and Orange County,” Wood said, noting industrial construction began up there three to four years ahead of North County. “We’re just now starting to catch up, and there’s a lot of pent-up demand.”

As a result of the decline in brick-and-mortar retail and increase in e-commerce, he said institutional investors have decreased their investments in retail by 37%, and their appetite for industrial assets has increased by 37%.

Erwin said over the last four years, industrial has had record absorption, but dropped off in the last nine months, though vacancy has remained low.

“So any uptick in demand at all, and we’re going to see a spike in lease rates and sale prices,” he said.

People are willing to pay for quality, he said, noting RAF Pacifica is asking $1.08/SF for its amenitized “creative industrial” buildings.

“Those are rent numbers we haven’t seen before, even at peak back in ’07,” he said.