Center City's multifamily development cycle is all but finished, and investments in the area are not looking too hot. But there still seems to be a sizable amount of activity in neighborhoods a little farther out from the core.

Seven proposals for multifamily developments have been submitted to the city's Civic Design Review for its Oct. 2 hearing, and only two of the proposals — which both correspond to the same project — are within the most generous boundaries of Center City. While CDR can only give nonbinding suggestions, the hearing is still significant as one of the most public-facing steps in the Philadelphia development process. 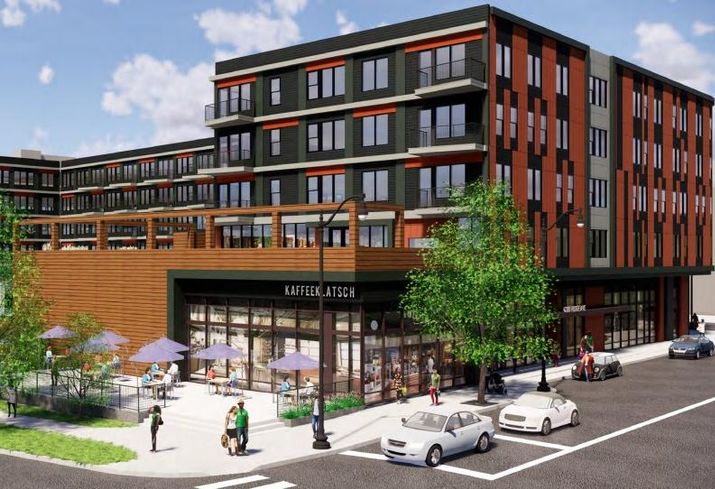 Civic Design Review
A rendering of the development at 4600-26 Ridge Ave. in the East Falls neighborhood of Philadelphia

Local developers Onion Flats and Grasso Holdings submitted a proposal for a six-story, 142-unit apartment building nestled between Ridge Avenue and Kelly Drive in East Falls, less than a block from Falls Bridge over the Schuylkill River. The submission is an updated version of the Ridge Flats development the joint venture sent to CDR twice before, most recently in 2016.

The updated proposal is for a shorter building with earthier accents in the design, to be more in keeping with the leafy neighborhood. The site's zoning was changed from CMX-2.5 to CMX-3 last year to accommodate the development, but CDR is still required due to the size of the project.

The 134K SF, JPGY-designed building would have its residential units arranged in a U-shape surrounding the two-story parking garage, which would let out onto Kelly Drive. The ground floor would have nearly 11K SF of retail, split up into three units of which at least one will be a restaurant with outdoor seating. Two of the retail units will front Calumet Street on the east side of the building, and one will front Ridge Avenue. A 1,987 SF lobby for residents will also front Calumet Street.

All told, the proposal includes 7K SF of lobby and amenity space, which includes multiple terraces, a green roof and a swimming pool atop the parking garage. About four blocks away, the East Falls SEPTA station makes this proposal a transit-oriented development. 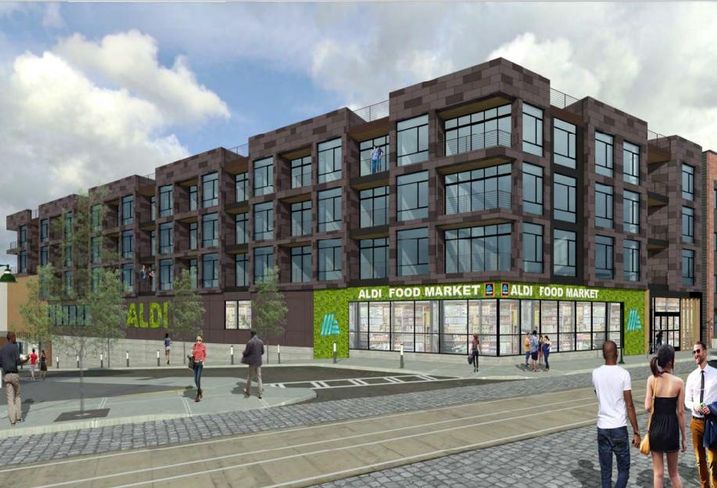 Main Street Development is seeking to build a 98K SF apartment building with 67 units sitting atop a proposed Aldi grocery store, which has already signed on for a 24,500 SF food market. The project fits within the 31K SF lot's CMX-2 zoning, but the CDR process is required for any project containing more than 50 residential units.

Though the address for the proposal is 6600 Germantown Ave., the development mostly abuts West Hortter Street, and MSD has titled the project 25 W Hortter. Drawn up by Morrissey Design and to be built by M Architects, the proposal includes a green roof and Zen garden for residents, as well as a "living wall" on the outside of the Aldi. The CDR submission labels the development as both four and five stories tall at certain points. Representatives from Morrissey Design did not respond to requests for comment by press time.

Plans for the lot also include a two-story parking garage with two floors of residential above it, which would be part of a second phase of construction. The first phase will include 52 parking spaces and 27 bicycle parking spots. Situated three blocks south of the SEPTA Germantown station, the project is also being considered a TOD. 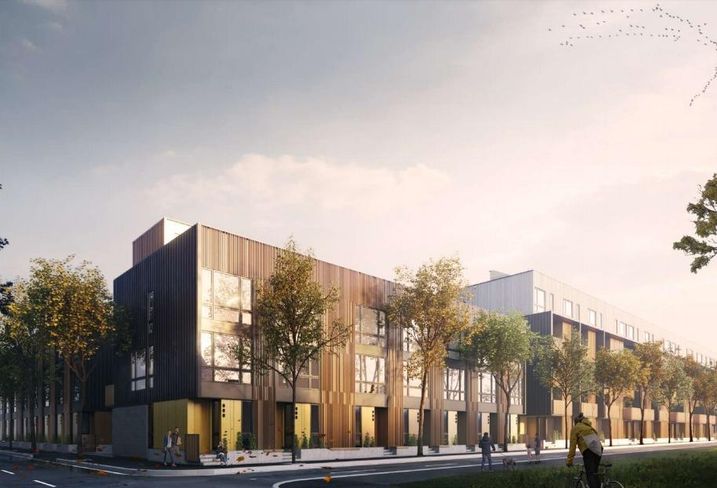 Civic Design Review
A rendering of 2201 East Somerset St., a proposed development in the Kensington/Port Richmond area of Philadelphia

Atrium Design Group submitted the plans for a mixed-use development of townhomes, apartments and commercial space at 2201 East Somerset St., on the edge of the Kensington and Port Richmond neighborhoods. No developer has been listed for the project, and representatives from Atrium had not responded to requests for comment by press time.

The development would be a varied mix of 23 three-story homes, nine four-story duplexes totaling 18 units, 24 five-story duplexes totaling 48 units, a five-story apartment building containing 60 residential units, one 4,600 SF retail unit and five artist workshops totaling 4,200 SF. The area is zoned industrial/residential, or IRMX, which mandates a minimum industrial footprint for any development that goes beyond pure single-family. As a result, the CDR is a precursor to a zoning variance request.

Part of the lot is occupied by a warehouse that is still in operation, but the site has been designated a brownfield by the Environmental Protection Agency, which brought in Temple University and Rowan University to consult with and advise local residents on the best possible uses for the plot.

Soon after the local consultation, the site was purchased by an unnamed buyer for $2.7M on May 23, just over $750K less than it was listed for back in 2016, according to Coldwell Banker. City property records do not list either sale.

All single-family houses and duplexes in the proposal would have roof decks, and all of them but the nine four-story duplexes would have indoor garages. The multifamily portion is slated to include a parking garage as well, and the center of the site will include a driveway for the garage and townhouses. 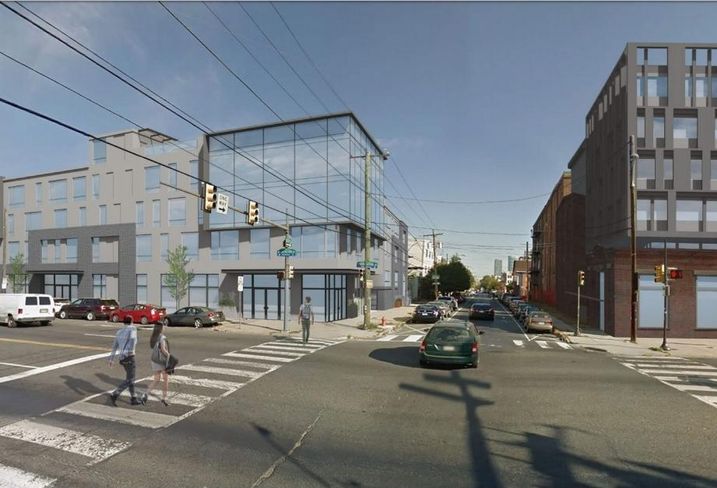 Civic Design Review
A rendering of OCF Realty's multiphase project at 2101 and 2201 Washington Ave. on the edge of the Point Breeze and Graduate Hospital neighborhoods of Philadelphia

Ori Feibush's OCF Realty has issued its proposal for the redevelopment of the land where the Frankford Chocolate Factory will be demolished, and it is one of several hybrid townhome/apartment building developments to be discussed by the CDR Tuesday.

The development proposal was split into two submissions, one for 2101 Washington Ave. and one for 2201 Washington Ave., both just on the north side of the street that separates Point Breeze from Graduate Hospital. Between the two plots will be a total of 65 townhouses and 96 apartments, with JKRP serving as architect for the project.

Every single-family home will have a roof deck and a two-car garage, and the apartment building will have a green roof of its own and a 67-car garage. The multifamily portion will comprise the top three floors of the four-story building stretching between 21st and 22nd streets on Washington Avenue, with the ground floor split between four retail units and a 1,620 SF residential lobby.

A driveway will sit behind the apartment building, which will service both the parking garage and a row of 21 townhouses on the north side of the lot facing Kimball Street. Between 22nd and 23rd streets, 44 townhouses will also be divided by a central driveway to split Washington Avenue-facing and Kimball Street-facing houses.

The proposal will require a zoning change for the property, for which Feibush's purchase only recently closed for $15.5M. Due to the factory's 150-year residence on the site, it is zoned IRMX, barring the construction of commercial mixed-use. 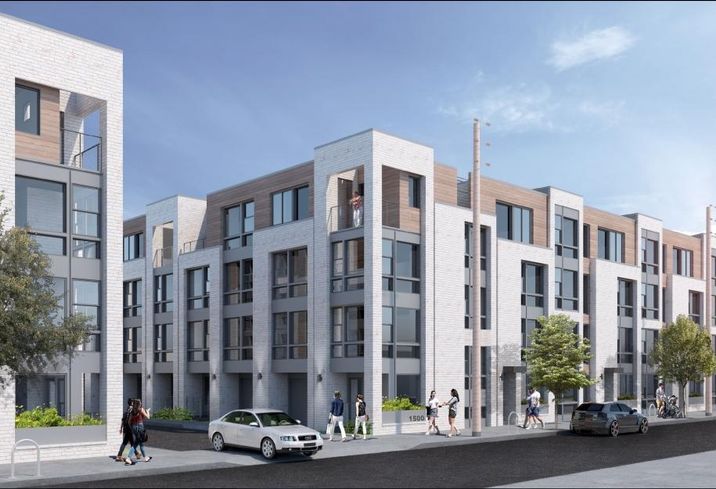 Civic Design Review
A rendering of Streamline Solutions' development at 1500-48 North Randolph St. in the Poplar neighborhood of Philadelphia

Streamline Solutions founder Sean Schellenger was stabbed to death in Rittenhouse Square in July, but his company submitted two proposals to CDR, both combinations of multifamily buildings and townhouses in areas on the fringes of serious development activity.

Streamline is planning eight townhouses and six multifamily buildings with six units apiece at 1500-48 North Randolph St., which sits between Fifth and Sixth streets a few blocks north of West Girard Avenue in the Poplar neighborhood. It also has plans nearby for a similar hybrid project at the northern edge of Northern Liberties, across the street from where Bart Blatstein is planning his sizable, mixed-use sequel to the Piazza at Schmidt's.

The proposal is markedly different from the one that appeared before CDR in July, with a sizable single-family component where once there were only apartments planned. The changes imply that either Streamline or the review board were uncomfortable with the level of density the original proposal contained.

All 14 buildings are planned to be four stories and 38 feet tall, all with roof decks and finished basements designed by Harman Deutsch. The single-family units will have parking garages that let out onto a driveway that splits the lot, while the multifamily dwellings will front Randolph Street. 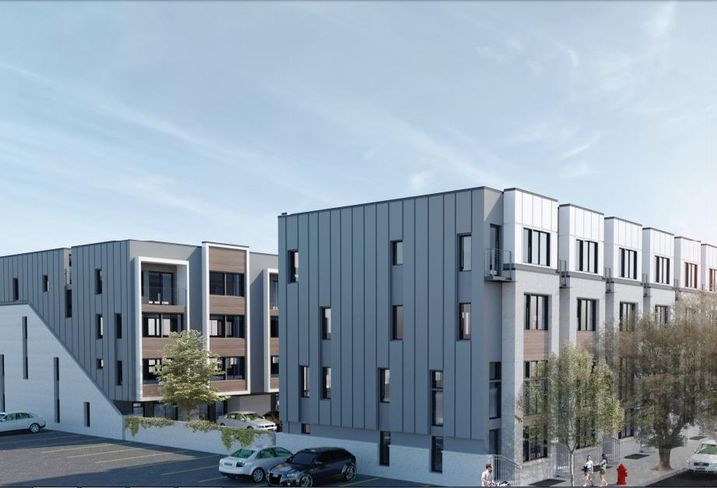 Civic Design Review
A rendering of Streamline Solutions' development at 2600 Hagert St. in the Kensington neighborhood of Philadelphia

Streamline's other proposal is in the southeast portion of burgeoning Kensington, again with small multifamily units fronting one street — this time, Boston Street — and townhouses fronting Hagert Street. Totaling 65K SF, the project is slated to contain 41 residential units, all told, and will also be designed by Harman Deutsch. Each single-family home will have a parking garage, and parking stalls will sit just outside the apartment units in the driveway bisecting the lot.

The Randolph Street project and this are both zoned RSA-5 for single-family usage, meaning that CDR is a necessary step before the Zoning Board of Approvals takes up the case for a rezoning or a variance. Neither project includes any commercial space, perhaps because neither is adjacent to a retail corridor.

Though the number of proposals in Kensington is indicative of the growing interest and density in the area, the emphasis on parking in all of the submissions in those areas seems to be an acknowledgment of one of the most frequent complaints longtime residents have regarding new development in a transitioning area.

CORRECTION, OCT. 1, 6 P.M. ET: A previous version of this article misstated the current zoning for the plot at 4600 Ridge Ave. This article has been updated.

UPDATE, OCT. 3, 1 P.M. ET: This article has been updated to reflect the architects for each project.