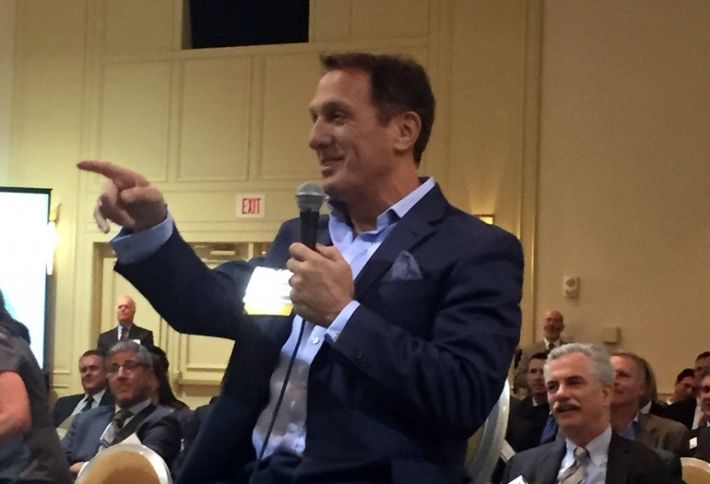 There's more than a mere real esatate boom going on in Philadelphia. The city's re-inventing itself from the dowdy days of cheesestake and Rocky into a city attracting new businesses and young workers, said our panelists at the fourth annual Philadelphia State of the Market (our first part of coverage here). Tower Investments CEO Bart Blatstein says that he was going to put multifamily on the site of The Province, his proposed casino, but was inspired to pursue the casino because he believes the city lacks nightlife. “Of the 100 top nightclubs in the country, not one is in Pennsylvania,” he says, and yet the young population continues to grow here. A casino on that site would be an entertainment anchor, bringing with it concert hall, restaurants, hotel, comedy club, the retail, and more. 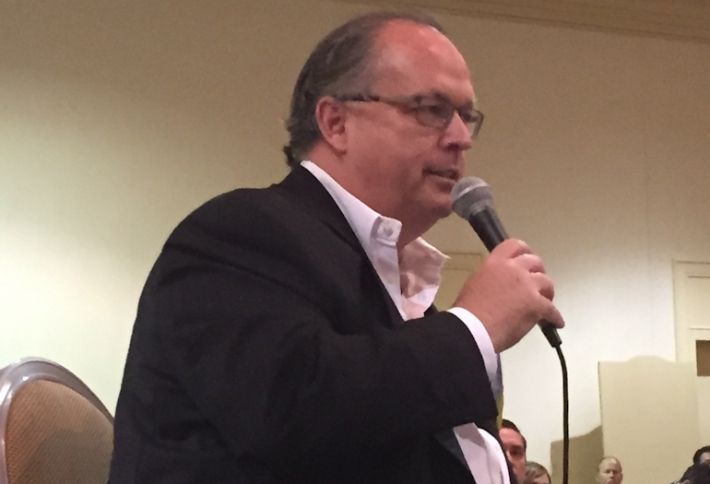 O’Neill Properties chairman Group Brian O’Neill says that some Philadelphians need to get away from the “yes, but” attitude about their city, because the city and the real estate market are enjoying a heyday the likes of which haven’t been seen in decades. “Every product type is on fire,” he notes. “We’ve had the biggest office leasing year ever, highest apartment rents ever, and retail rents are robust. We ought to get away from our negativity.” 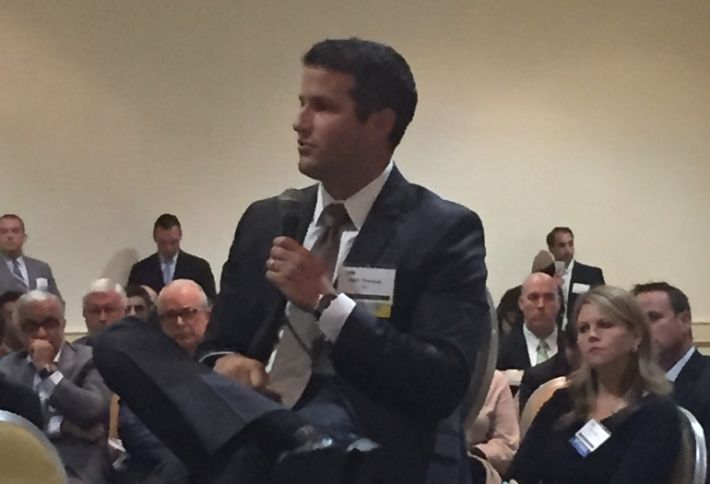 HFF senior managing director Mark Thomson, co-head of the Philadelphia office that opened about a year ago, is continuing to build out the full-service brokerage team. While the office is new, Mark has been in Philadelphia real estate for 10 years, and he says it’s a good time to be in the market due to the availability of attractive financing and a market flush with equity. Moreover, equity that wants to be in Philadelphia, especially for core and core-plus deals. Investors, many whom recently discovered the market, like the returns, and “we’ll continue to see record investment sales prices,” Mark says. 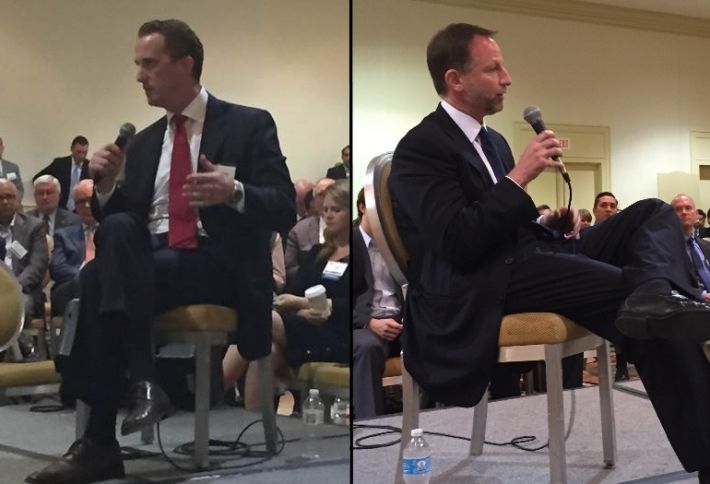 MRP Realty SVP Charley McGrath (left) says that Philadelphia is well positioned for the next two or three years. Historical job growth for the metro area has been 17,000 jobs each year—that’s the 20-year average—while last year the region enjoyed growth that of about 24,000. Charley believes that momentum will continue, and it’s going to push demand in the residential market. BET Investments president Michael Markman (right) says it’s harder now to qualify for a first mortgages, and that’s part of the reason apartments are doing so well. Eventually, people will return to homeownership in greater numbers, and while that will be good for retailers—homeowners buy more—it won’t be good for the apartment market in the long run. So there might be an overbuilt situation in apartments in the City of Philadelphia in 24 to 36 months, which would create buying opportunities for BET. 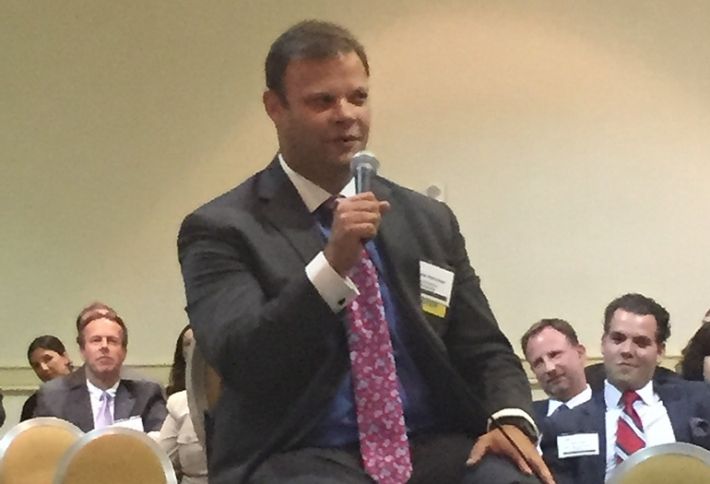 Post Brothers Apartments prez Matthew Pestronk is currently working on 260 S Broad, which will be for-sale residential, and the Presidential City Apartments, which will be more than 1,000 rental units. Matthew says that the prospect of apartment overbuilding has been discussed ad nauseum, and while that might be the case for “knock-off product,” developers of distinctive product have less competition in the rental space. After the current pipeline is delivered, by 2017, he expects a lull in rental development. The next big thing, he says, is condo development. 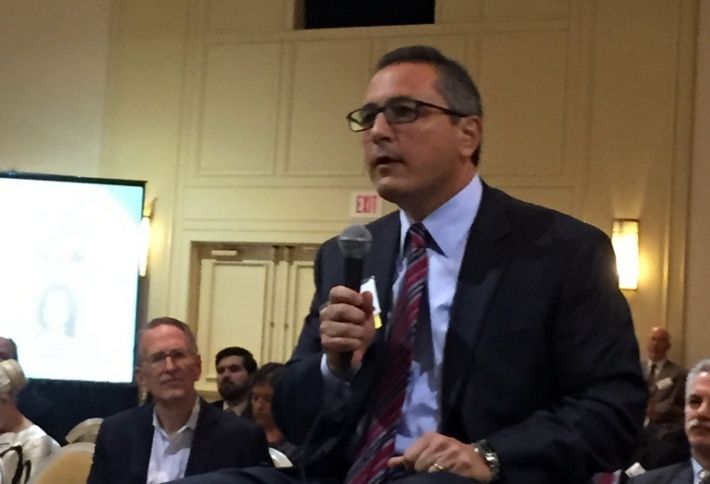 Keystone Property Group SVP of operations and development Rich Gottlieb says he’s committed to both Center City and the suburbs. Millennials will move back to the suburbs, he explains, at least until Philadelphia improves its schools, because not every family can or wants to send their children to private or magnet schools. He adds that Comcast’s impact on Philadelphia will be very important—for one thing, the company will bring in smart people who will eventually start some of their own companies, and Philadelphia might be the home of new innovative corporations because of it. 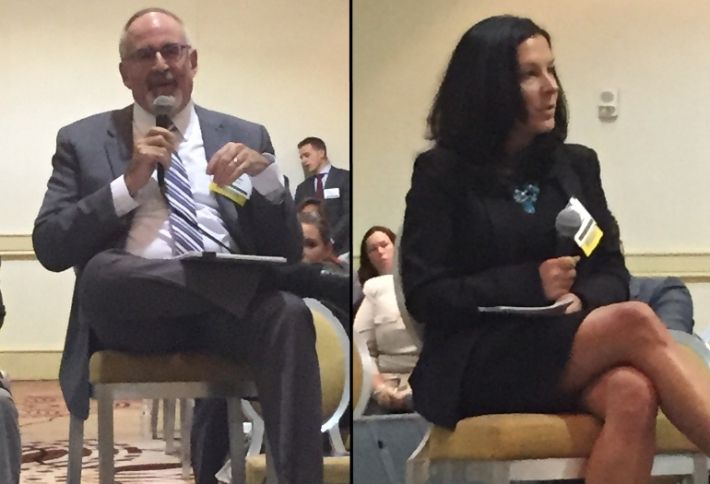 Ballard Spahr real estate department chair Bart Mellits moderated the development panel. He reps developers and owners nationwide in multifamily, office, retail, industrial, hotel and mixed-use developments. This summer alone, Ballard was involved in the closing of the Comcast Innovation & Technology Center and Rodin Square in Philadelphia, and Bart led the team in the joint venture between Drexel University and Wexford Science & Technology, a Biomed Realty company, in buying 14 acres of development property in the city. And WeiserMazars partner Lisa Minniti-Soska moderated the investment panel; she's experienced in providing auditing, accounting, and tax services to a variety of industries, including real estate and construction.