The Impact Of The One Water Street Deal

The two very different panels at Bisnow's Philadelphia Affordable Housing and Multifamily Forum covered a lot of ground, so let's get straight to the most pertinent points.

1. Remorse about One Water Street 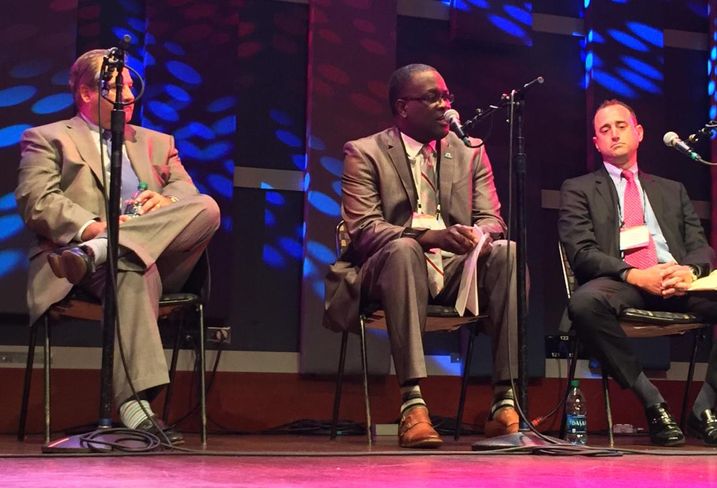 Immediately upon the affordable housing panel opening up the floor for questions, Philadelphia Housing Authority president Kelvin Jeremiah was asked about the ramifications of allowing One Water Street to pay cash rather than set aside affordable units in its luxury high-rise. Kelvin was unequivocal.

“I regretted that decision—one of the things we want to be doing is ensuring that some families can live in higher-opportunity neighborhoods,” Kelvin said. “When families live in those communities, we know they thrive.”

Kelvin also promised to be firmer on the application of the law, which allows developers additional height on their projects in exchange for affordable set-asides.

“We have a deal that we’re currently working that will require a similar developer in Center City to make 20% of their units affordable housing,” Kelvin said. "Let me tell you, they will be doing that 20%."

2. Affordable housing is not affordable to build 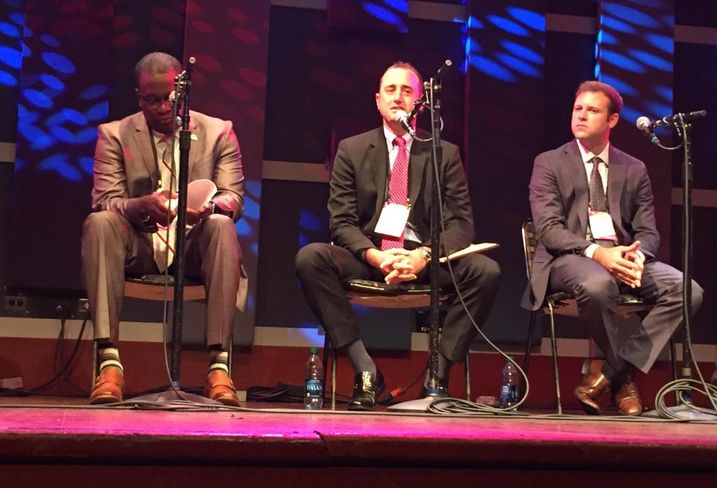 Across both panels, everyone seemed to agree that conditions have been very good for developing in Philadelphia for profit, while also being tough on affordable projects.

Kelvin estimated that it costs about $380k to build a new-construction unit of affordable housing, an astounding figure considering how much a unit would rent for.

“There isn’t a developer here that would build at that price point," Kelvin lamented, "primarily because there’s no way you can get any sort of return.”

Pennrose senior developer Kyle Speece (above, center), agreed: “By and large, affordable housing developments are more costly for us than market-rate housing.”

Even though the demand is definitely there, and as most of the panel agreed, there is money to be made, the cost of production plus the difficulty of finding enough tax credits and federal assistance programs to offset said cost is enough to send most businesses in the other direction.

3. The problem of availability is deepening 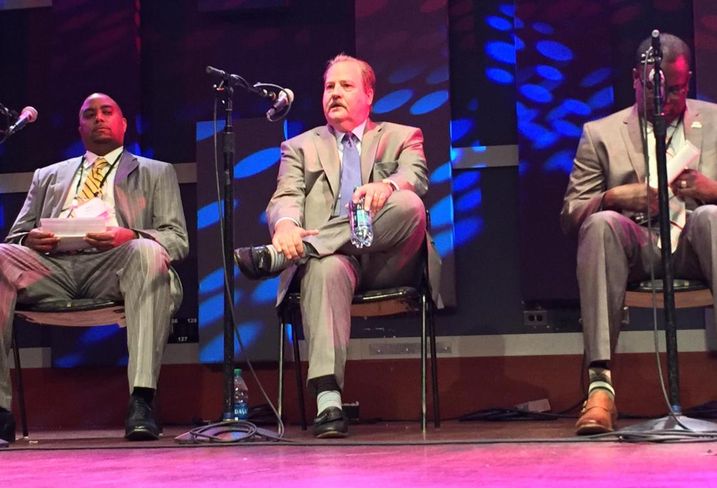 We’re in the midst of a building boom for multifamily units in Philadelphia (more on that later), but it’s leaving affordable housing in the dust. The biggest problem with that is the thousands of people who need it, not nearly all of whom are in poverty.

For example, the low income housing tax credit, a backbone of affordable housing policy, applies to those whose income is 60% of the median for the area. In Philly, that’s around $30k to $42k per year, which is what many hourly and even salaried positions pay.

“People think that affordable housing is synonymous with public housing or Section 8," Kyle says, "and, frankly, it’s just not right.”

And yet, those in poverty do have the greatest need for suitable living conditions. The Philadelphia Housing Authority has a waiting list of 90,000 people, and as David Cardwell (above, center) of Freddie Mac points out, “That means at least 90,000 people are living in substandard housing across the city.”

4. Conditions in Center City are great for multifamily 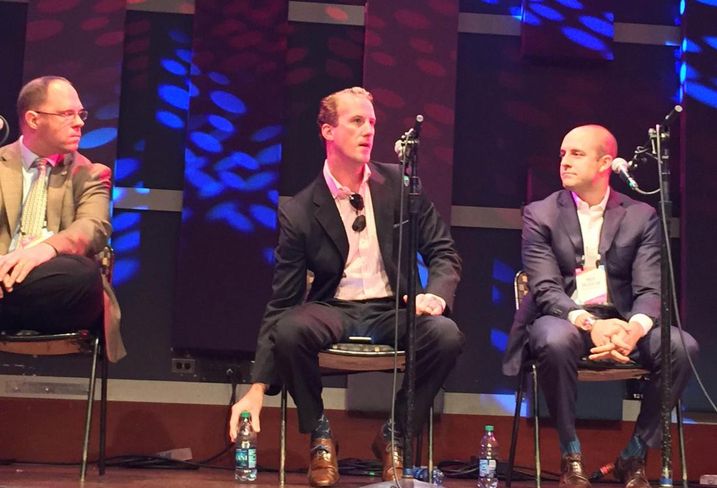 The central business district of Philadelphia is booming, and it's a hotbed of commercial and residential development. Charles McGrath (above, center) of MRP Realty estimates the average income in Center City is $110k per year, “on par with Georgetown in Washington, DC, and some parts of Manhattan.”

“When you look at median income in Center City, that’s why you’re seeing an explosion not just in rent prices, but in single-family home prices as well,” said Philip Balderston of Odin Properties (above, right).

Even though apartment costs have risen considerably, they haven’t yet reached the unhealthy levels of the above cities or San Francisco—they sit at around $3.50/SF, which would have been unheard of even five years ago, and everyone on the panel agreed they stand to rise further.

“The reality is, things are changing at such a rapid pace," Richard Oller of GoldOller said, "and I give credit to [former Philadelphia mayor and governor of Pennsylvania] Ed Rendell and the tax abatement program, which really jump-started the development in downtown Philadelphia.” 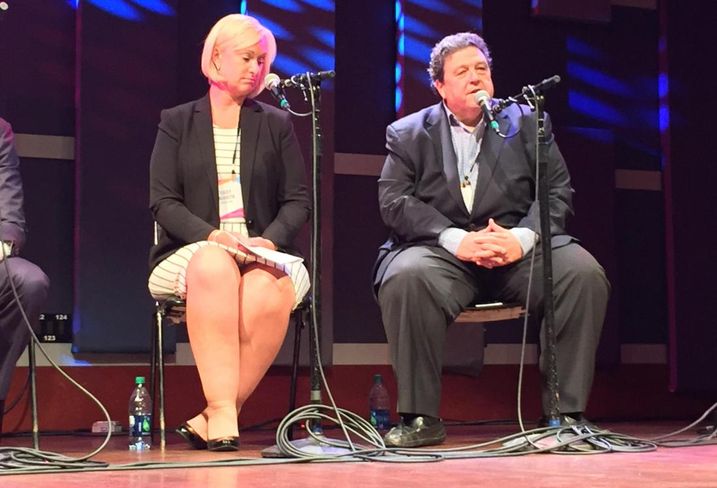 As with nearly any conversation about multifamily housing these days, the first word on everyone’s lips was Millennials. They’re the ones driving the population shift to urban centers, and the most successful ones are expected to fill the Class-A buildings under construction.

So if they’re all moving to the city, the natural question arises: How do you make them want to stay? Richard (above, right) put it as bluntly as possible: “Schools. That’s it.”

Tracey Ungaretta (below, center) of Greystar laid it out in a bit more detail, saying, “Millennials are moving into the city early on, and then they have kids and they leave, and down the road, the kids leave and they move back into the city.”

They leave because the state of public schools in the City of Philadelphia is fairly dire, and if it doesn’t improve, it could put a massive strain on private schools in the same area.

“Private schools are running out of capacity, to the point where people are going to be signing applications at birth like in New York and DC,” Richard said.

The panel was split, however, on whether a lack of improvement in the school situation would truly drive Millennials to the suburbs. Charles did not think it’s as much of a zero-sum game as Richard seemed to.

“I think it’s net neutral,” Charles said. “The same issue exists in NY, Boston, Chicago, etc. You just need to create an environment where you make a ton of money. Public schools are always going to be public schools, although I hope they turn around.” 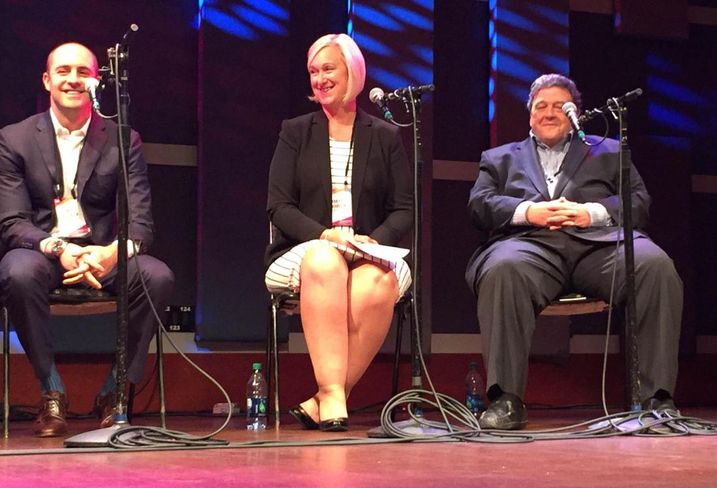 Philadelphia is experiencing a building boom like it hasn’t seen in decades, and with this many cranes in the air, it’s natural to wonder if it’s too much all at once. And although vacancy rates should go up in the short term, there are factors at work that will naturally hinder overdevelopment.

“A lot of the cranes are for end-user buildings,” said Charles, meaning they’re already largely filled before opening.

The main reason not to be concerned is the same reason that affordable housing is so challenging. As Charles put it, “It just costs a lot of money to build in Philadelphia.”

“You can build a new building in DC for 42% of the cost of renovating a building in Philly,” Charles said.

So while the boom certainly won’t last forever, it will be compressing cap rates and returns that curtail Philadelphia’s growth, rather than empty buildings—a preferable outcome that would allow for better recovery down the line.