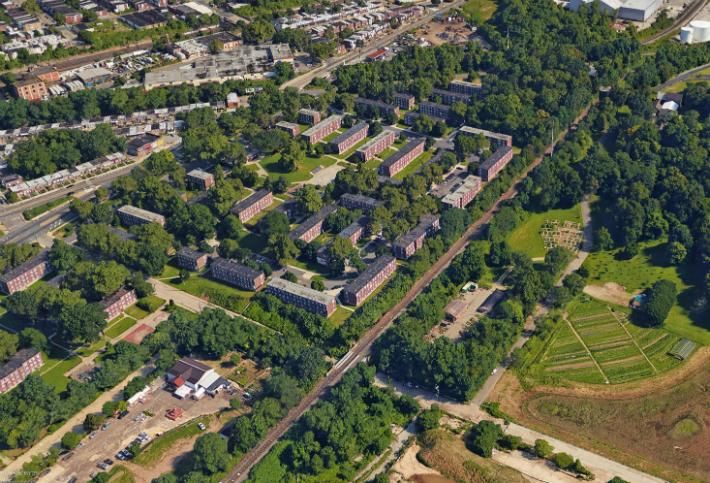 Google Earth
A satellite image of Bartram Village in Philadelphia, with the Kingsessing neighborhood to the west and the Bartram's Garden park to the east

Pennrose has been tabbed to redevelop the massive Bartram Village public housing project in the southwest Philadelphia neighborhood of Kingsessing, next to the public park and conservatory Bartram's Garden.

The affordable developer won the bidding process initiated by the Philadelphia Housing Authority to revamp the complex, built in 1942 and barely updated since. Although the planning process has yet to begin, Pennrose estimates creating between 600 and 800 units at full build-out. All details will be worked out between Pennrose, the PHA and the residents of Kingsessing, Pennrose President Mark Dambly told Bisnow.

“We’re about ready to embark on the community planning process, and we’re working on scheduling a meeting with the neighborhood and the PHA," Dambly said. "After that, it should take a year to two years to figure out what’s economically feasible.”

The project was awarded two grants from the U.S. Department of Housing and Urban Development, joining an exclusive club that only promises to shrink in the coming year. Pennrose received two grants from HUD's Choice Neighborhood Initiative: the CNI Planning Grant and the CNI Action Grant, awarded to only six and three projects this year nationwide, respectively.

The grants combine for $1.3M in funding — a paltry sum compared to the amount that will be needed, but every penny counts in affordable housing. Additionally, the grants symbolize the necessity and promise of the project.

Before any planning meetings take place, one of the biggest questions to settle is whether to tear down the old buildings or renovate the existing ones. PHA Resident Advisor Asia Coney told PlanPhilly she expects the buildings to ultimately come down, but whatever happens, the PHA has a mandate to preserve all affordable units.

Beyond housing, Dambly expects the redeveloped Bartram Village to include some retail and commercial space, as well as market-rate apartments on top of federally subsidized housing. As for public space, Bartram Village has built-in advantages.

"The city has just been awarded $12M in federal funding for the Schuylkill River Trail, which will connect Center City to this neighborhood, so we’d like to connect Bartram's Garden and Mural Arts for the good of the neighborhood,” he said.

Once the planning process concludes and financing is arranged — no easy feat in this environment — the first phase will begin construction, and Dambly has some idea of how Pennrose will start.

"I think the jump-off point will be something of substance that includes both residential and some public amenity space," Dambly said. "My guess is that it’ll start off with 100-200 units and some other complementary space for the first phase, but it depends on the results on the market study.”