After receiving approvals two years ago, LT Global Investments is hoping to break ground on its massive $500M LT Platinum Center project next to Angel Stadium in Anaheim later this year, an LT Global official said.

LT Global CEO Max Yang said the Hong Kong-based company is itching to get started on the 14.8-acre mixed-use project but said the company is still studying the market before making a final determination on when to break ground.

“Ideally, we want to start as soon as possible,” Yang said after Bisnow’s Future of Anaheim, Santa Ana and Placentia event Thursday at the Anaheim Marriott.

“The market is great right now, the economy is strong and there is a new record-low unemployment rate but on the other side is how long is this going to last?”

Yang was one of several panelists to speak to a crowd of more than 130 commercial real estate professionals about the ongoing developments in Santa Ana, Anaheim and Placentia at the event.

Panelists discussed Santa Ana’s growth and the importance of developers working with the city to reach out to the community to limit NIMBYism. Other discussions included the carpenters union’s effort to reach out to middle and high school students about pursuing careers in construction, Chapman University’s new student housing in Anaheim, the impact of a possible increase in minimum wage on projects in Anaheim and future projects coming in Placentia.

The mixed-use project will have 400 residential units, 430K SF of retail, entertainment and restaurant space, a 200-room hotel, a 1.5-acre park and 75K SF of office space. The center will include a grocery store, a movie theater and a public market.

The Anaheim City Council approved the project in 2016.

The approval followed a dispute with the Angels baseball team. The Angels had worried about the impact the adjacent new development would have on food and retail operations, traffic during game days and owner Arte Moreno's own plans to develop the stadium's parking lot. It is unclear how the two companies came together but the dispute was resolved.

“I think this is going to be great for the Platinum Triangle,” Yang said. “Everything that we’ve seen are multifamily developments here and the residents don’t have a commercial center or retail gathering place at the moment.”

Yang said the company is eager to start the project but the biggest worry is the strength of the economy.

Construction costs are rising and it has been about 10 years since the end of the recession with some economists expecting a correction in the market.

“Cost is our only concern,” Yang said. “We know our project is going to take three years and we don’t want to get caught in the dip.

“I don’t think there is going to be a crash,” he said. “All signs show a strong economy, but it still puts us in a difficult decision.”

Yang said he and his staff are going to make a decision to break ground soon.

“I think the LT Platinum Center will be a great place to live, work and play,” he said.

Check out photos from the event in this slideshow: 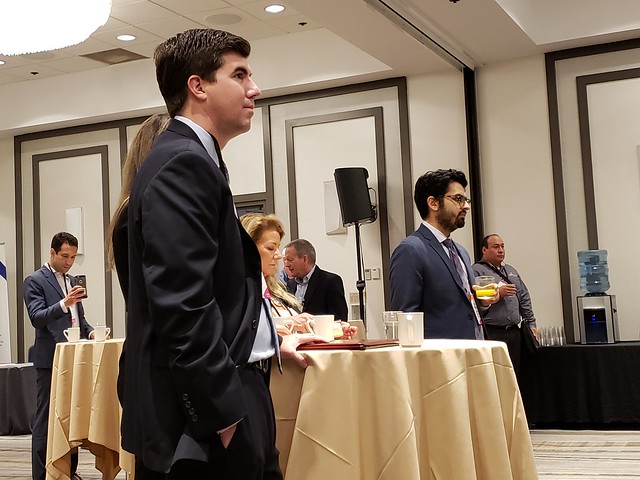