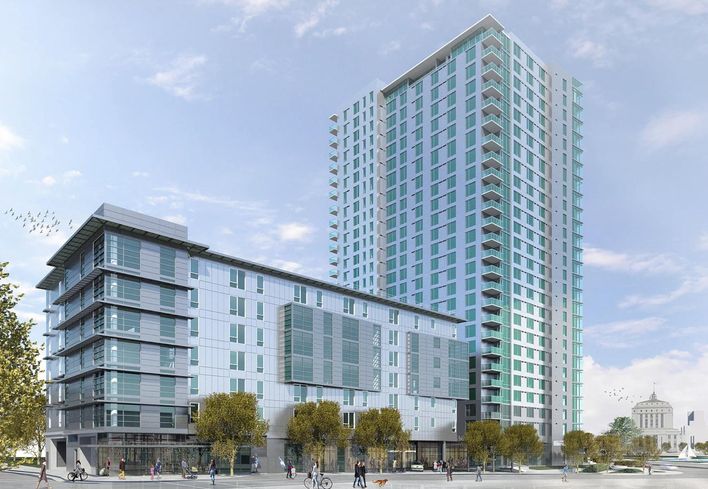 Near Lake Merritt, the 361-unit project branded as Lakehouse Commons received unanimous approval from Oakland's Planning Commission in 2016. As with many other projects in the Bay Area, soaring construction costs stalled its groundbreaking.

"Construction costs on our projects over the last two years have gone up 30%," said Johnson, a panelist at Bisnow's upcoming NorCal Multifamily Annual Conference event on Nov. 13. "When you combine that with the requirement that we had to do a project labor agreement, it's made the overall feasibility of the project that much more challenging."

Another hurdle for Lakehouse Commons is the ratio of affordable units, but UrbanCore and EBALDC are seeking state tax credit equity as well as federal tax credits to make the project pencil, Johnson said. The developers' bid for the city-owned parcel won over competing proposals and called for 108 affordable units, or 30% of the total.

Now, it anticipates submitting drawings for building permits, its general contractor, Clark Construction, locking in subcontractor bids, and finalizing project financing all by Q1 of next year, Johnson said.

The remaining 70% of units are market-rate for what UrbanCore considers a high-end product.

In all, the projected total development cost is around $300M, according to Johnson. The architects for the project are AVRP Studios and Pyatok Architects.

Across town, UrbanCore, which began leasing its now 90% occupied $53M, 110-unit Coliseum Connections project in March, is considering a second phase for the successful modular project, Johnson said. The use of modular saved about 10% in construction costs and cut 20% off the construction schedule, according to Johnson, who says he expects modular to grow in significance in the Bay Area as costs grow.

"It's definitely a major problem, and there doesn't seem to be a slowdown in the pricing of projects that will begin in 2020," he said. "There is the potential for a number of projects that are entitled or that are pursuing entitlements not starting in the next year or two."