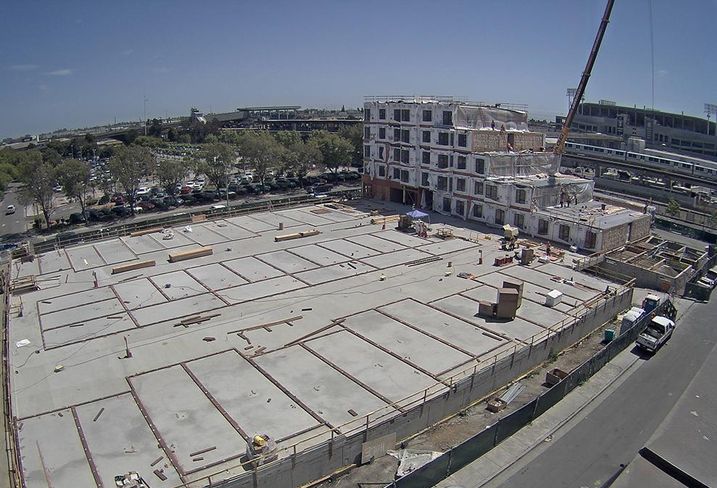 Courtesy of UrbanCore Development
The Coliseum Connections site before completion.

Modular units are being installed at Coliseum Connections in Oakland. The $53M project, developed by a JV of UrbanCore and Oakland Economic Development Corp., will create 110 mixed-income units on a 1.3-acre Bay Area Rapid Transit-owned parking lot ground-leased to the JV.

Coliseum Connections is one of a handful of modular projects in the works or being planned in Oakland. Panoramic Interests plans to build over 1,000 units in West Oakland next to BART, and RAD Urban is planning two high-rises from steel modular units. 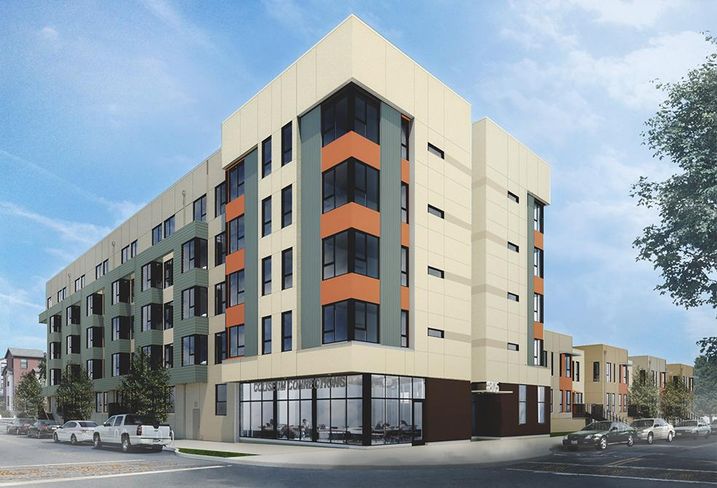 A five-story building will have 66 one- and two-bedroom flats and 44 two-story townhomes will be grouped in three separate buildings. There will be 86 residential parking spaces, including two car-share spaces in a partially below-grade structure. Townhouse units will be set back 10 feet from 70th and 71st avenues and have entry stoops connected to the sidewalk.

The project, designed by Pyatok Architects and Prefab Logistics, will include a community café space for residents and the public, a community room and open space. The project is designed with the five-story building facing the BART line sheltering the lower scale two-story townhomes.

Financing came from a mix of public and private sources with Oakland and BART as primary sponsors of the project. UrbanCore secured a $29M construction loan with Chase Bank, $12M from the city of Oakland, $1.25M in subordinate debt from Commonwealth Multi-Family Housing Corp., $10M from the state’s AHSC program, $9.7M in tax credits from the Royal Bank of Canada and $2.5M from Alameda County. UrbanCore also secured a $1.4M HUNT Mortgage/Freddie Mac permanent loan on the property.