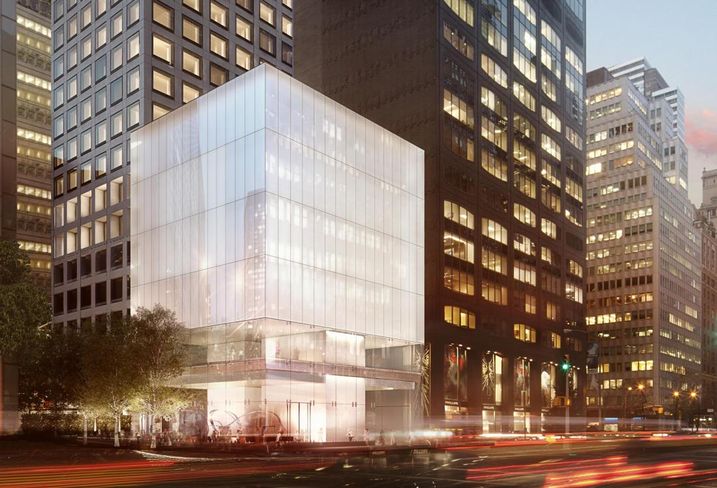 Macklowe Properties has released renderings for the retail and office space at 432 Park Ave.

The retail and office space together will total 130k SF, and the street-level look of the retail portion should look familiar to anyone who knows Harry Macklowe’s projects: It’s a glass cube.

Macklowe went out on a limb 13 years ago when he developed the now-iconic Apple Store cube in the concrete plaza in front of the GM Building on Fifth Avenue near 59th Street.

The retail at 432 Park Ave will be divided into three parts, including an underground concourse. CBRE’s Andrew Goldberg, Richard Hodos, Matthew Chmielecki and Joseph Hudson will rep Macklowe in filling all three parts of the retail space.

A Macklowe Properties spokesperson declined to disclose asking rents for either the retail or office portion, but given the record-setting lease recently signed just across the street at 425 Park Ave, we’ll go out on a limb and say the office space will cost a pretty penny, and the same will likely go for the retail.

That could come in handy for the project, as signs start to show that the ultra-luxe condo market in the city is running into trouble. Last week, news broke that the Chetrit Group is backing out of its roughly $1.5B stake in an ultra-luxe condo conversion at the Sony Building, which reportedly was to have a triplex penthouse asking as much as $150M.

As of last month, according to 6 Square Feet, $170M in condo deals, or 13 out of 141 units, had closed at 432 Park Ave, out of a $3.1B total sellout. Sales on the condos officially opened in January. You can watch Harry Macklowe discuss the project on Bisnow TV here.