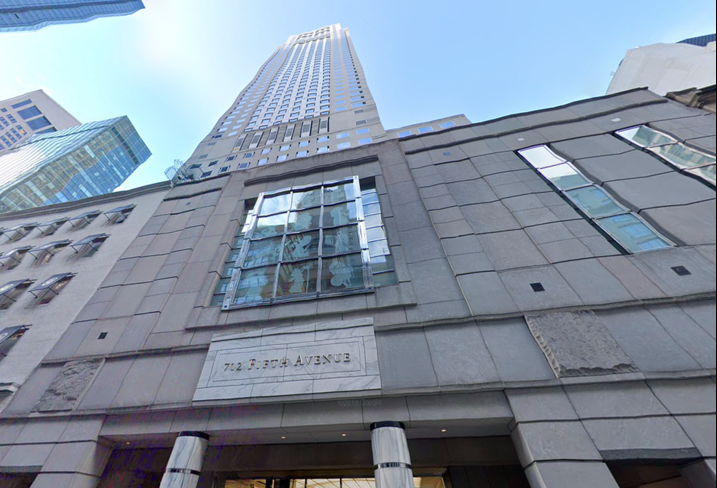 As legal wrangling over rent payments — or lack thereof — heats up in New York's retail space, a new lawsuit against a major real estate brokerage shows office owners are ready to battle their tenants in court to hold them to their leases.

An affiliate of real estate investment trust Paramount Group has filed suit against Douglas Elliman Real Estate, alleging the residential marketing firm has skipped out on rent in April, May and June for its office at 712 Fifth Ave. In a lawsuit filed Thursday in New York State Supreme Court, Paramount says Douglas Elliman owes more than $273K in rent for its office space, which spans the building's 10th floor.

Douglas Elliman is New York City's largest residential brokerage, and has had its 13K SF office across the street from Trump Tower in Midtown Manhattan since 2014. Howard Lorber's Vector Group, which owns Douglas Elliman, leased the top floor of the 52-story building until 2017, when it moved its headquarters to Miami.

Like all brokerage firms in New York, Douglas Elliman has been hamstrung by stay-at-home rules banning real estate showings, as well as the broader economic slowdown caused by the coronavirus. In the first quarter, its New York City revenues declined to $67.1M from $85.2M in 2019, according to a Vector Group Securities and Exchange Commission filing. Douglas Elliman laid off a quarter of its staff and cut salaries by 15% in April, Lorber said on Vector Group's earnings call in May.

"We are also consolidating some office locations and are in discussions with our landlords regarding rent reductions, deferrals or holidays and are hopeful we can reach a fair and reasonable resolution with our landlords across the country," Lorber said on the call.

Paramount Group, like many landlords around the country, is facing its own economic questions. The publicly traded office owner's stock price ended Thursday at $7.65, just over half of what it was worth at its peak in February. Paramount CEO Albert Behler said on an earnings call last month that Paramount collected 95% of office rents for April, but had received relief requests from companies that represented 16% of Paramount's rent roll.

"Some of these requests are what I would characterize as opportunistic in nature, and are from tenants that we believe have the ability to pay their contractual rental obligations in a timely manner," Behler said on the call May 2, according to a Seeking Alpha transcript. "We are in the process of evaluating these requests on a case-by-case basis, and not all of these requests will ultimately translate into modifications to leases or rent deferrals."

"Douglas Elliman has been in regular communication with Paramount Group and has reached a fair and reasonable resolution on the lease at 712 Fifth Avenue," the spokesperson said in a statement. "We continue to consolidate some office locations and are in discussions with other landlords across the country regarding rent reductions, deferrals or holidays."

More and more rent dispute lawsuits have made their way into virtual courtrooms. Landlord JEMB Realty is suing H&M for skipping on $4M in rent and Empire State Realty Trust is suing Urban Outfitters for $1.2M, both for stores in Herald Square. Simon Property Group sued the Gap for $66M in unpaid rent across the country earlier this month.

UPDATE, JUNE 12, 12:15 P.M. ET: This story has been updated with a statement from Douglas Elliman.