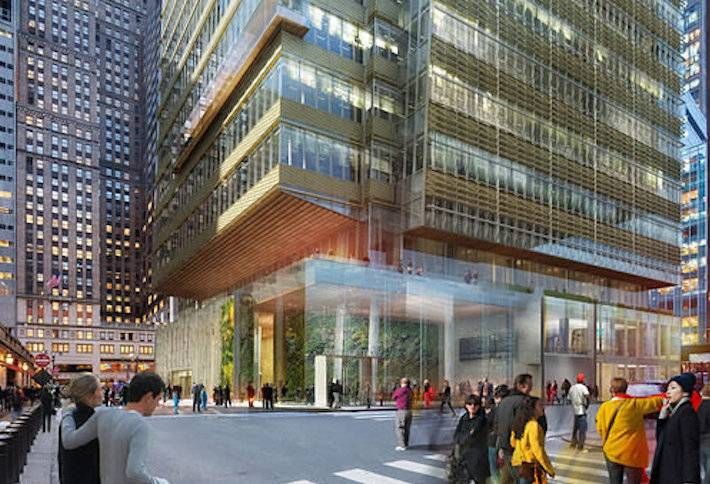 
Rendering of the ground floor of One Vanderbilt in Midtown

The Real Estate Board of New York has concerns about just how expensive it could get to build in Midtown East once the planned rezoning of the area allows for the floodgates on development to (at least in theory) open.

“The cost for a new office building, even after providing for higher FARs, is prohibitively expensive in Midtown East,” REBNY SVP Michael Slattery said Friday at a hearing held by the Manhattan Borough Board, The Real Deal reports.

He noted that site acquisition costs on the avenues that the rezoning will grant the highest floor area ratio are already over $1k per SF. By REBNY’s estimate, total development costs in the area to be rezoned — land, demolition, construction, air rights, soft costs, loss of revenue during construction and other expenses — stand at around $2,340/SF.

Slattery cited a survey of roughly six REBNY members active in Midtown East. He noted that the survey’s results pegged an office rent of $204/SF for a new Park Avenue office building to make financial sense.

To mitigate the high cost of development in the district, Slattery proposed allowing larger as-of-right development on mid-block sites on Third Avenue.

At the hearing, required as part of the uniform land use review procedure, others chimed in on various aspects of the rezoning, including where the rezoned area’s eastern edge should be.

Kathy Thompson, a resident of the neighborhood of Turtle Bay to the east of Third Avenue, called the current border, which includes buildings that front Third Avenue on the east side of the street, “willful destruction of a neighborhood.”

A representative of the Regional Planning Association argued that the rezoned district should go even farther than current plans call for, all the way to Second Avenue, which in the coming decades will see an expansion of the Second Avenue Subway.

Plans to rezone 78 blocks, adding an allowable 6.5M SF of new office space over about a 20-year period, were released in August.