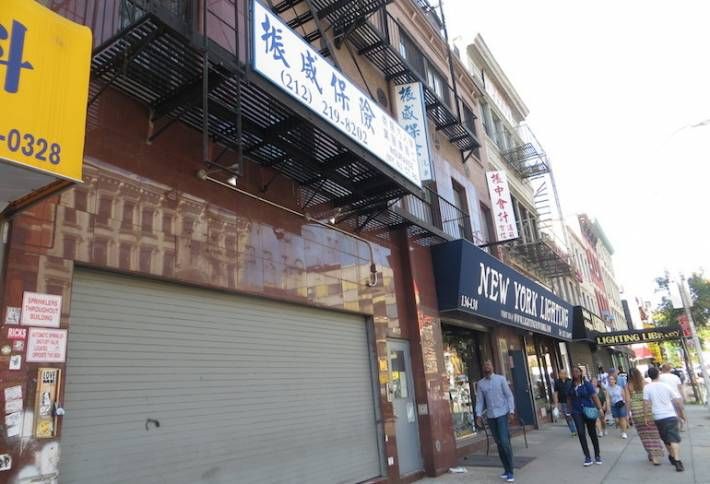 As the Bowery continues to morph (most recently, the sale of a strip of lighting stores from 134-142 Bowery, above, portends redevelopment), Eastern Consolidated’s Adelaide Polsinelli advises: Don't cry for old New York. The Bowery has been reinventing itself since Native Americans used it as a foot path to Canada. These lighting stores started as Federal-style rowhouses, and now, perhaps, the site is fated to become residential again. 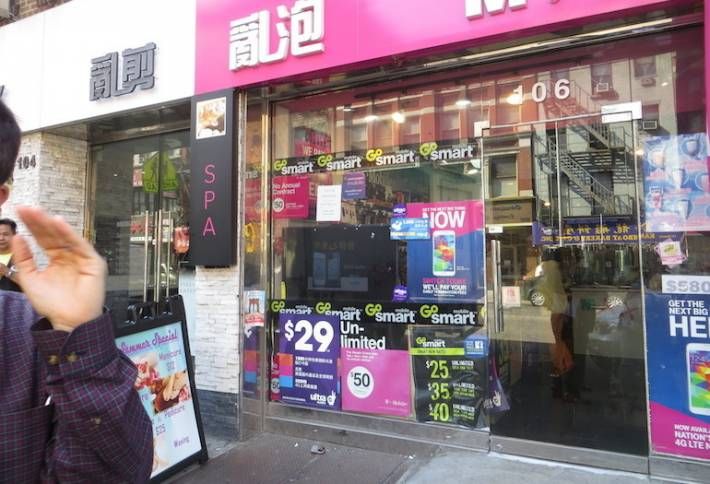 The inevitability of change is apparent in northern Chinatown’s previous role as an entertainment district for monied Manhattanites and then the middle class, says New York Historical Tours’ Kevin Draper. Take 104 and 106 Bowery, above. The area was a precedent to Lincoln Center until the Gilded Age chased the rich folk into their parlors and ballrooms. Then, the middle class took over. A theater in the basement of 104 and 106 has in its history hosted the first performance of Uncle Tom’s Cabin and the first Yiddish theater in the US (which led to vaudeville, which spawned Broadway). Now, the buildings are a spa and a mobile phone store. 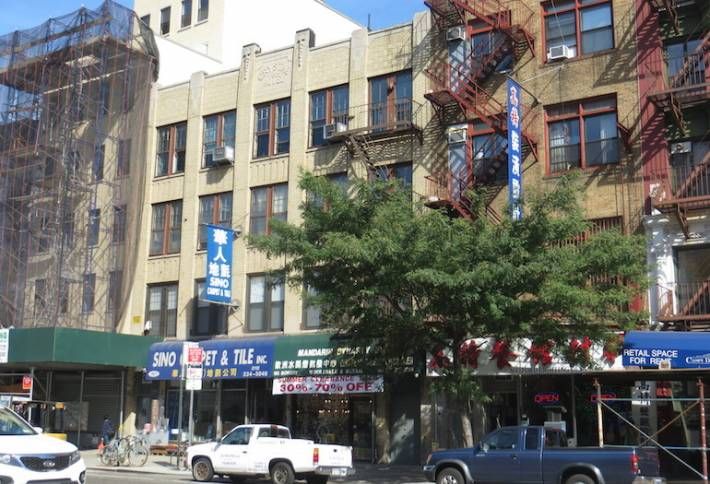 A below-grade theater at the Crystal Hotel at 165 and 167 Bowery hosted the first-ever amateur night. Fifty years before the Apollo opened, a stagehand here would pull people off the stage with a cane, giving birth to the phrase “give him the hook.” 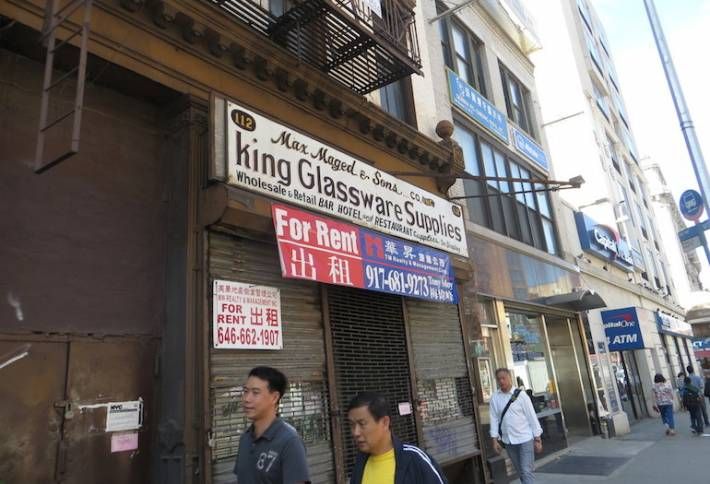 Now, retail on the street is elevating, says Eastern Consolidated’s Carlos Olson. SoHo-level rents are crossing Houston southward, like Anthropologie’s more than $200/SF lease in 250 Bowery, a record south of Houston. And the rise is contagious. 112 Bowery, for instance, is under contract for $11M, or $739/SF, a record south of Kenmare/Delancey. 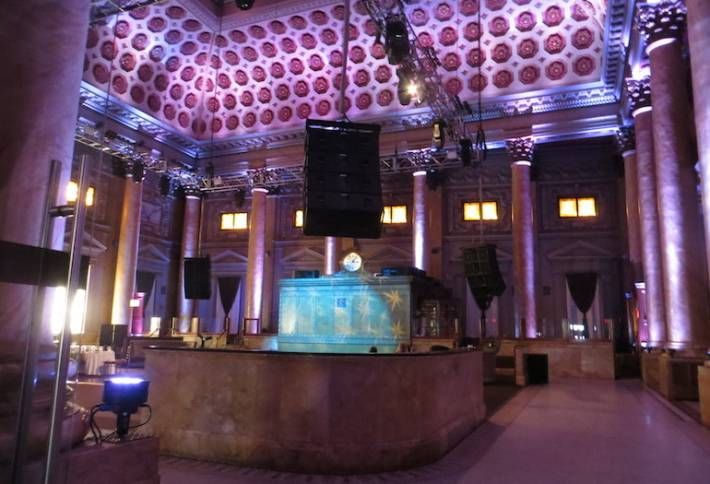 Event venue Capitale now occupies the former Bowery Savings Bank at 130 Bowery (but it’s actually the second building to stand on this spot). The bank, designed by Stanford White (known for the original Penn Station and Harvard University) and now Landmarked both inside and out, is opulent for the $1/week savers it served… 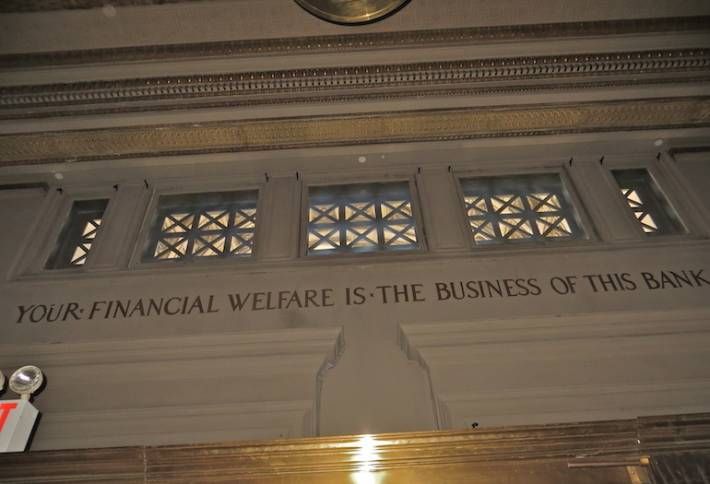 …but it took a lot to convince these folks their meager money was better off in an uninsured bank than under the mattress. The fortified underground vaults that added security back then are now tasting rooms. 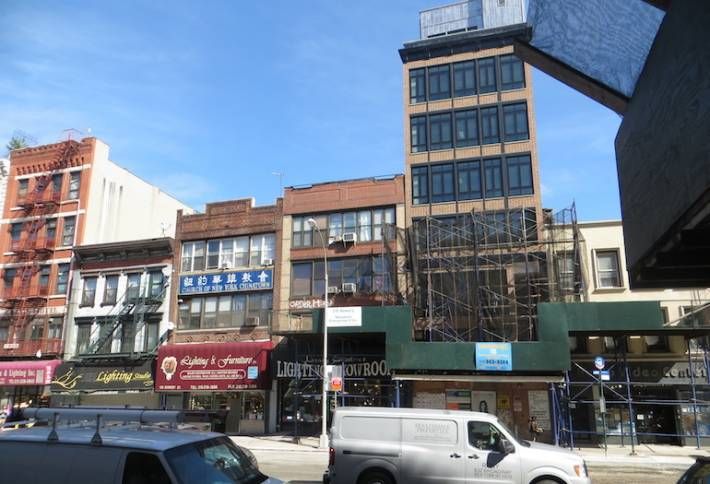 From the steps of Capitale, we snapped 135 Bowery, the tallest building on the block, at eight stories. It launched construction 10 months ago after its Landmark status was revoked. The ground floor will be a First American International Bank. 141 Bowery (black and yellow awning) soon will rise higher, to 11 stories with retail, office, an ambulatory care center and 20k SF of apartments. The red brick building to its left, the Grand Hotel, went up when the area was upscale, but became a flophouse when the above-ground Third Avenue halted the area’s prominence. 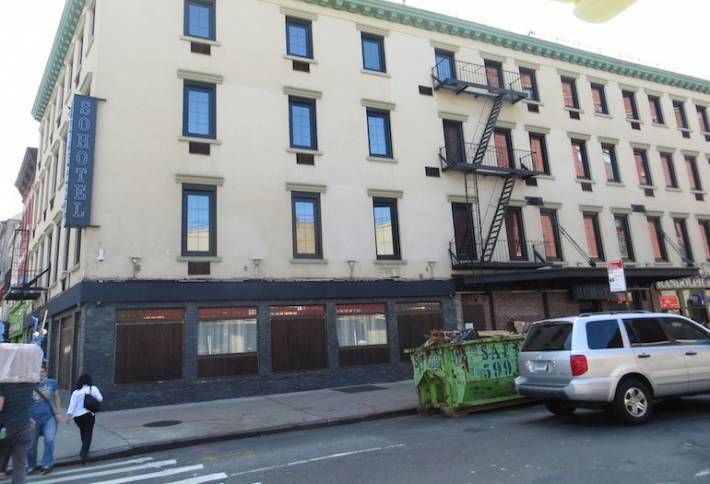 Across the street, on the southwest corner of Broome and Bowery, is NYC’s longest continuously operating hotel, the Sohotel, which is keeping things fresh with a new, upscale restaurant, Bacchanal. 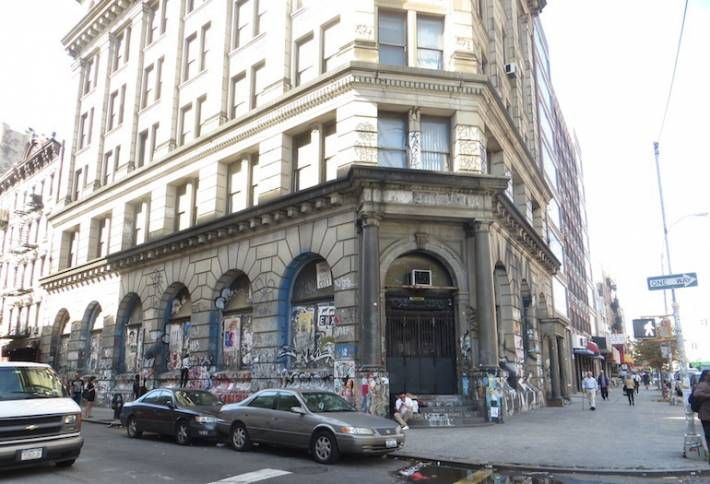 The famed 190 Bowery, long home to photographer Jay Maisel and family, has sold to RFR for $50M. Jay paid $100k for the office building almost 50 years ago before turning it into a private residence, a steal because conventional wisdom deemed the five steps up to the front door an ill fit for retailers. Now, Adelaide says, retailers would go crazy for such a location, steps or not. 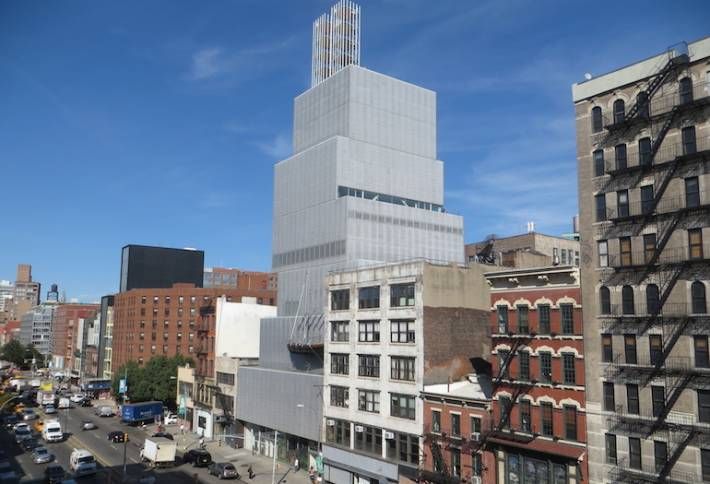 Farther up Bowery brings even more modern-day development, from the New Museum, which we snapped from the roof of The Bowery House, a modern take on SROs (which still dot the Bowery). Nearby at 250 Bowery, the penthouse is for sale for $3,000/SF.