'We've Never Had A Building Like This One.' Behind The Success Of 56 Leonard

Izak Senbahar has mastered a winning formula for turning luxury condominium development projects into bonanzas for himself and his company, Alexico Development Group. 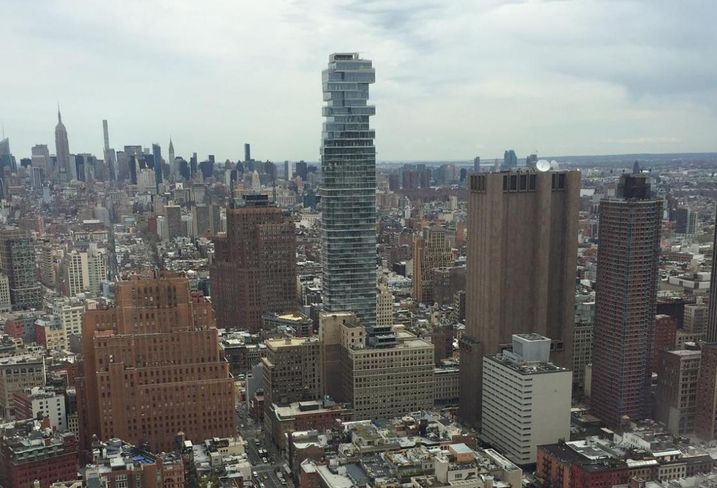 He hires award-winning architects, he produces the highest-quality building possible and he builds in wealthy Manhattan neighborhoods thirsty for more high-end living spaces.

Nowhere is this formula more evident than his latest project at 56 Leonard St. in Tribeca, where 110 units of his Jenga-inspired tower have closed and more than 30 units are under contract for a total sellout of $1.1B.

At 56 stories, the Herzog & de Meuron-designed building boasts bird's-eye views of Manhattan from custom-made, floor-to-ceiling windows, elaborate one- to four-bedroom living units, and 17K SF of amenities, including a fitness center, a swimming pool, a children's playroom, a library, a theater and events space.

On the ground floor, the building will bring a much-awaited sculpture by Anish Kapoor, the creator of Chicago's iconic Cloud Gate, to Manhattan for the first time. Senbahar said that sculpture is "taking as long as the building," which took three years to construct. 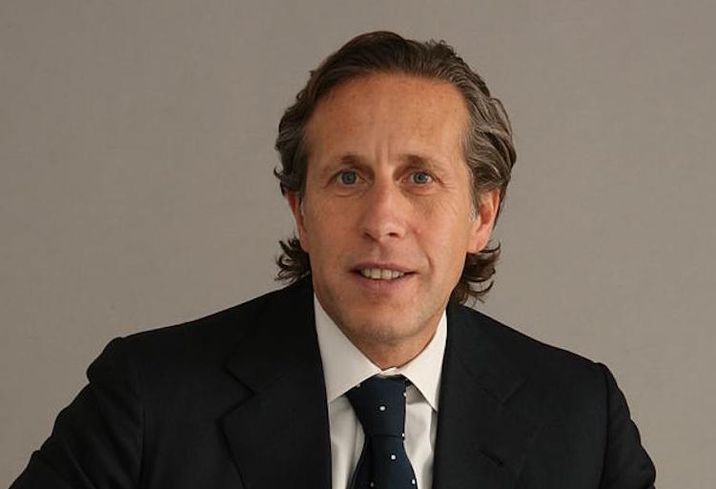 The building came together after Senbahar traveled to Switzerland and met lead architects Jacques Herzog and Pierre de Meuron, known for designing the Tate Modern of London, Beijing National Stadium and the Allianz Arena of Munich.

"I wanted someone for the Tribeca site that would add something creative to the already beautiful New York skyline," Senbahar said. "It was going to be seen all over the city, and I wanted something exciting."

Senbahar said he never intended to have a building look like a game of Jenga. He walked around the neighborhood with the two lead architects, and one commented that Tribeca was monotonous. Looking at most other tall buildings, every floor followed the next and the group wanted to design something artistic to contrast the other buildings in the area. 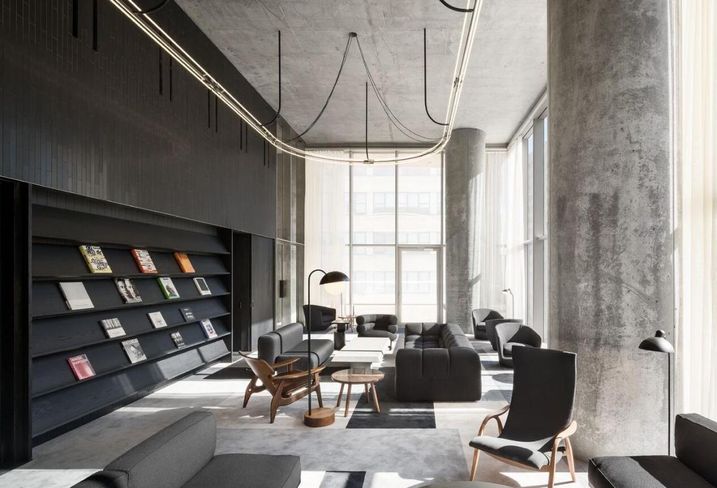 Back in Herzog and de Meuron's Basel offices, the team made 20 to 30 models stacking floor plates one on top of the other, before coming to the design they eventually chose for the building. The layout keeps balcony and window views unobstructed from floors immediately above.

When it came time to start selling building units in late 2013, Corcoran Sunshine Marketing Group sales agent Elizabeth Unger said she had never had an easier time selling luxury condo units in her 20 years in the business.

"We sold 90% of our units in nine months and broke over $900M in sales," Unger said. "We never have had a building like this one, and I don't think we ever will see one like this again." 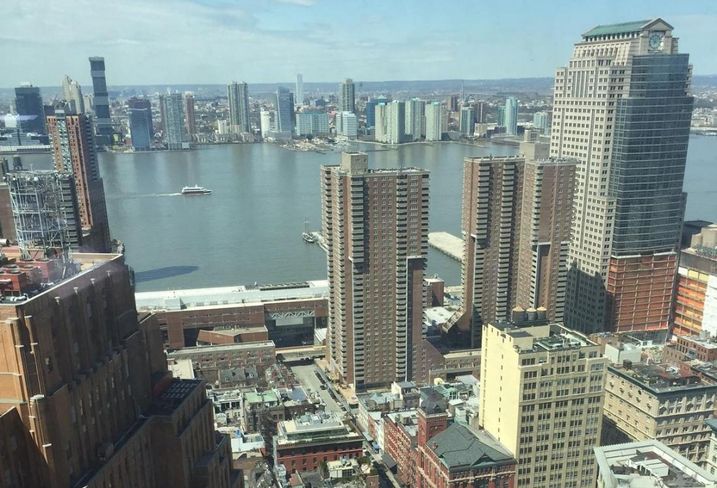 Bisnow: Kouichi Shirayanagi
View from the window of a 41st floor condo at 56 Leonard St.

New, multimillion-dollar deeds on building units are filed with the New York Department of Finance every week as new residents move in. The latest filing of a unit closing last week was a $28M penthouse suite, known as PH58, purchased by hedge fund manager Leon Shaulov and his wife, Irina, a cosmetics consultant.

The reputation of the architects, the neighborhood need for buildings with natural light, the outdoor space and the amenities were the four main factors Unger saw for the success in sales. Seventy percent of the residents are from the Tribeca area, with a few buyers from uptown, around the U.S. and internationally.

The building has been such a hit, there are reports of buyers attempting to flip units for hefty spreads before they have even been lived in. Senbahar said that may be a byproduct of the years it takes between contract signing and closing, because lives change. Generally speaking, Senbahar said the value and health of real estate is in holding long term. 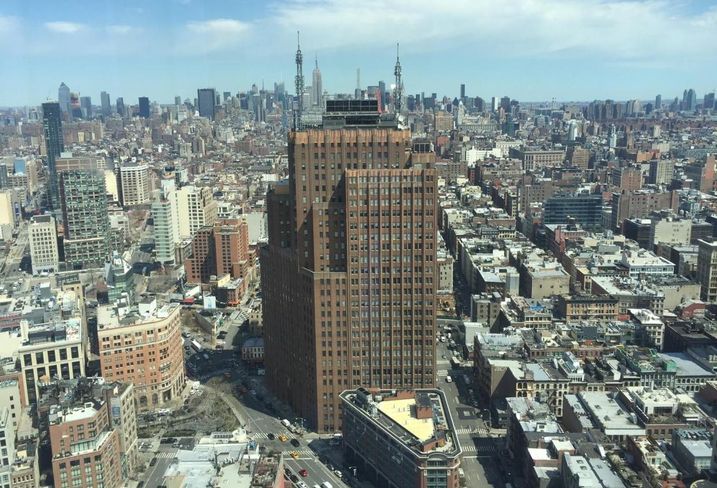 "When I build buildings, I like seeing people using the building with life and kids," Senbahar said. "Speculation is frowned upon, but resale is the nature of buildings. When someone buys, we don't get into what they will do after."

Completing the building was never smooth sailing; at times it looked like it might never haappen. Senbahar recalled initially opening the sales office for the building the day Lehman Brothers collapsed. The financial crisis put construction on hold for years. The site sat empty while interest related to the land purchase and other fees snowballed. Alexico needed a $350M construction loan in January 2013 from a consortium of banks, led by Bank of America, to complete construction.

As a private company, Senbahar would not disclose how much the building cost in total, but the land purchase was $150M and Senbahar said the banking consortium would not loan him more than 50% to 60% of his total cost for the construction loan.

"If I were an emotional person, I would have cried a lot in the last 10 years," Senbahar said of the challenges he faced with finishing the building. "I am more pragmatic, stubborn and a little delusional from having a Jewish mother. It is all the right ingredients for doing a project like this one." 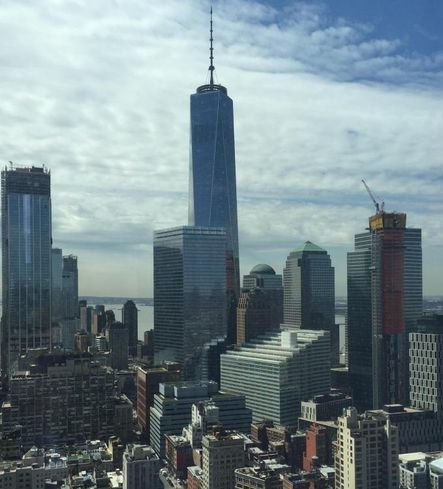 Senbahar grew up in a Jewish family in Istanbul, Turkey, where his father owned a bra factory. After attending schools in the French Lycée system, he immigrated to the United States to study mechanical engineering at Catholic University in Washington, DC, and business at New York University.

After a short stint as a commodities trader for French giant Sucre et Denrées, Senbahar was recruited into real estate by Kiska, a real estate firm owned by the father of a friend. There, he learned the ropes of the business before going out on his own.

Senbahar co-founded the Alexico Group in 1993, and it has a reputation of developing high-profile Manhattan properties, making use of extended air rights, designed by globally renowned architects. He has built The Elektra in Gramercy Park, The Laurel in Lenox Hill and The Grand Beekman in Midtown East.

Besides 56 Leonard, Senbahar is most proud of the 16-story, 31-unit condominium complex at 165 Charles St. in West Village, designed by Richard Meier.

Senbahar said he has found success in real estate development because he has the right combination of patience, a methodical approach, a sharp focus, and collaboration with smart and talented people. Senbahar said understanding feasibility is a key skill for every developer looking to do excellent work.

"There is a lot of disconnect between a designer doing a drawing and what can be done," Senbahar said. "I can tell almost right away what we can and can't build."

CORRECTION, APRIL 18, 5:50 P.M. ET: 56 Leonard has closed on 110 units, not 107. The building's exclusive sales agent is Corcoran Sunshine Marketing Group. This story has been updated.