Amid a slew of bad news that only seems to get worse for WeWork, one of its executives Thursday warned against painting coworking deals with a “broad brush.” 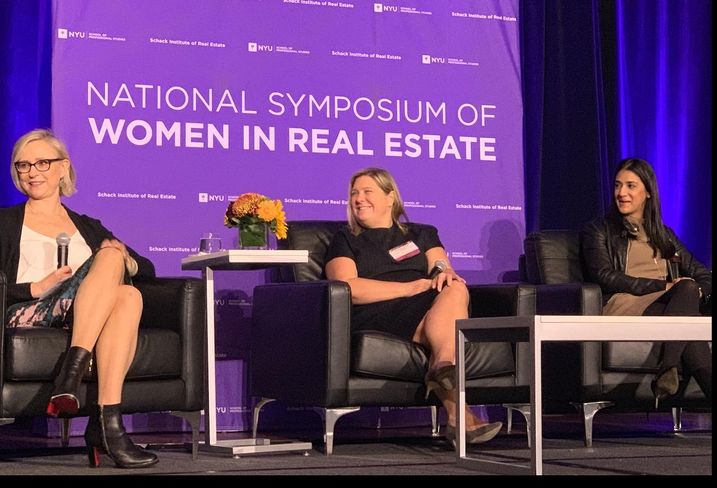 “I think it’s easy for people to just read a few articles and make an assumption and not really dig in,” said Candice King, the head of capital markets for ARK, The We Company’s real estate private equity platform.

King was speaking on a panel at the NYU Schack Institute of Real Estate’s National Symposium of Women In Real Estate Thursday, in response to a question from the moderator on how she speaks to lenders in the wake of WeWork’s turmoil.

She said WeWork had proven there is widespread demand for office tenants seeking out flexible workspace, and acknowledged that it is “easy to write off” coworking as a fad.

“It’s important for lenders to look at the fundamentals of each opportunity. And not paint everything with a broad brush, because there is a lot of noise ... When there is noise, there is often opportunity,” she said. “Clearly, right now it’s extra noisy. There are a lot more conversations, but we have a lot of partners that are very committed to the organization, and our equity partners are committed."

The We Company announced the launch of ARK in May, with a view of deploying $2.9B equity for the acquisition, development and management of real estate assets. Ivanhoé Cambridge — a subsidiary of Caisse de dépôt et placement du Québec — provided $1B, according to Bloomberg.

The announced plan was for property fund WeWork Property Advisors to be rolled into ARK, and for then-CEO Adam Neumann to sell the buildings he owned to it. The Lord & Taylor Building on Fifth Avenue, for which WeWork Property Advisors paid $850M this year and is now reportedly struggling to lease, was said to have been transferred into the fund in March.

“Fundamentals are really important, regardless of the tenant, you first have to understand the real estate, understand the asset, understand the fundamentals of the location,” King said, adding the company is focusing on its core business — coworking, rather than apartments or schools — and pursuing strategic growth.

There is no doubt the company is in major damage control after its plans to go public turned to ash and Neumann was forced to step down. Former Chief Financial Officer Artie Minson and former Vice Chairman Sebastian Gunningham were appointed co-CEOs in his place.

Wendy Silverstein, who had been the co-head of ARK, also stepped down last month, though she told The Real Deal at the time that it was not because of WeWork’s problems but because she needed to be available to her elderly parents.

Silverstein, who was previously CEO of New York REIT and a top executive at Vornado, also spoke at the NYU event. She said coworking is still in its infancy and WeWork has proven that tenants will pay up for "optionality."

“I think, largely because of WeWork’s size — not because of its business model, but because of its size — a number of large corporations got a taste of this optionality,” she said. “Landlords that own buildings are going to have to decide, a) are they willing to make this accommodation and b) what's the right price for the optionality?’”

She declined to comment to Bisnow after the panel.

Along with a buildup of dry powder, interest rates, trade wars, the longest economic expansion in U.S. history and the tense political climate, coworking was a major theme for discussion for the all-day symposium.

In discussing deals that are challenging to finance, TPG Real Estate Finance Trust CEO Greta Guggenheim said an office building with WeWork in it in New York City is “probably still fine if it's operational."

"An office building in Indianapolis where WeWork's got a big work letter and has two years free rent, you know, I’d be concerned about that," she said.

Anjum Sharma, Brookfield head of acquisitions and dispositions for New York and Boston, pointed to the fact that Brookfield owns between 20% and 30% of both Industrious and Convene, and has formed “participation deals” with WeWork and Regus. Brookfield is also experimenting in London with its own coworking platform, she said.

“We should learn what our tenants want,” she said. “Out of a total 26.4M SF in New York I only have 1.8% lease exposure to actual coworking leases. I don't feel too exposed in that way, but I like being an investor ... Being an actual owner in some of these firms and growing with them.”