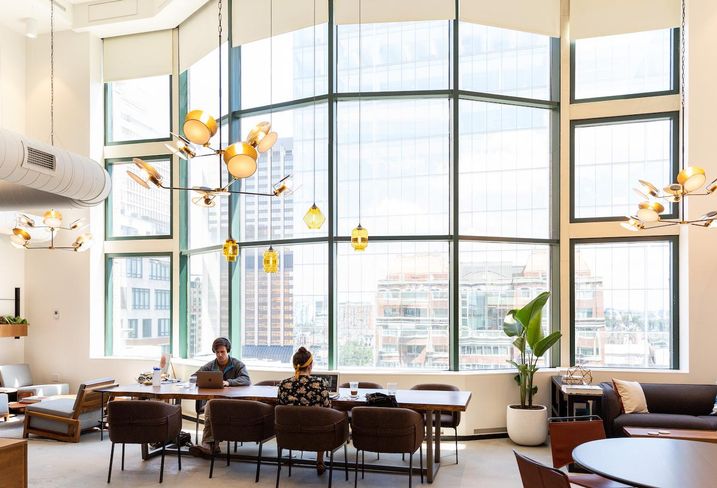 Courtesy of Industrious
Industrious location in Back Bay, Boston

Coworking firm Industrious raised $80M in a new funding round with backing from Brookfield Properties Retail and Equinox, with whom it plans to partner on future locations.

The firm has raised $222M in total, and company officials expect it will be profitable by the first quarter of next year.

“The first half of this year, the cash flow from our units covered I think 92% of company overhead — as compared to 50% last year,” Industrious CEO Jamie Hodari told Bisnow in an interview Thursday. “Assuming things stay on that trajectory in a few months, it will cover all of it and the company will be profitable — which is obviously distinct from a lot of what you see in our industry.”

Industrious is now planning to open co-designed workplaces with Equinox gyms and hotels across the country — including one at the Hudson Yards complex, where Equinox is opening a gym and its first branded hotel.

Deals with Brookfield will be announced soon, said Hodari, who declined to comment on Industrious' current valuation.

“Coworking space is a growing area in our portfolio,” Sandeep Mathrani, CEO of Brookfield Properties Retail, told Bloomberg. Mathrani was the CEO of mall giant GGP before Brookfield acquired it last year.

While a debate has arisen over how much coworking space in a traditional office building is too much, Industrious is pushing its coworking spaces into retail properties faster than its rivals. Outside of eventual spaces in Equinox and Brookfield facilities, Industrious has deals with Sears real estate owner Seritage Growth Properties and mall owner Macerich, among others, to open Industrious locations in malls and department stores.

This latest funding will be used to accelerate its landlord partnerships, Hodari said, a model the company began moving toward last year. Hodari had previously told Bisnow that management arrangements, rather than a traditional lease, is a more sustainable model.

Industrious has about 80 locations and is planning to reach partnerships deals at 60 more sites next year.

“We specifically pursued landlord investor partners for this round in order to accelerate the growth of our landlord partnership program,” Hodari said. “If we are going to be the industry's best partner to landlords ... we really need to understand the desires, pain points and various business dynamics at play for those landlords.”

The behemoth of the coworking industry, WeWork, released its initial public offering prospectus last week, which has led to intense analysis and scrutiny over its financials and growth strategy.

WeWork revealed billions in losses and said it expects to continue to lose money for the “foreseeable future.” Many coworking rivals have rushed to point out how they differ from the coworking giant, which has a current valuation of $47B.

One New York City landlord is suing to get out of their lease with the company, claiming it has no guarantee the company is worth as much as it claims. Meanwhile, WeWork rival Knotel yesterday announced closure of a $400M funding round that brings its valuation over $1B.