As Coworking Conquers Markets, Landlords Wonder How Much Is Too Much

WeWork, which has grown from a one-floor lease in SoHo to New York City’s largest private office tenant in the span of nine years, is expected to go public next month, targeting a $3.5B raise. 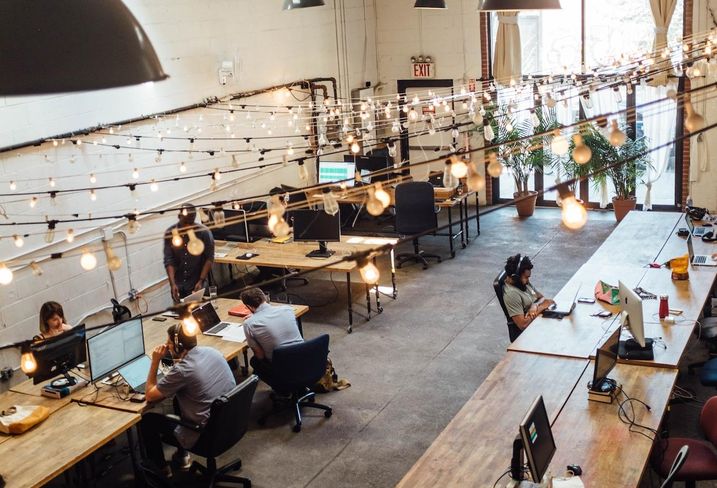 But amidst the hype of the highly anticipated initial public offering, the commercial real estate community continues to wrestle with how to hedge against the exploding coworking and flexible workspace sector, and how to capitalize on it.

While some say an IPO could quell lingering anxieties, concern about landlords’ growing reliance on coworking providers — particularly this late in the cycle — remain.

“I’m really excited," said Jamie Hodari, the CEO of Industrious, one of the largest coworking providers in the U.S. "WeWork’s IPO and its eventual stability as a public company will be beneficial, and will be a powerful stimulant of landlord comfort with the industry, regardless of how the actual pricing comes out. [Landlords] are trying to understand our industry … Transparency is always helpful in solidifying a maturing industry.”

There is no questioning the voracious growth of the sector. Coworking leases in Manhattan increased by 200% last year, according to CBRE, with firms like Knotel, Convene and Spaces all taking space at a rapid clip.

Many well-established landlords have rushed to sign up WeWork and its counterparts, both with direct leases and revenue-sharing agreements.

But some remain cautious — others downright skeptical. Last year, Empire State Realty Trust CEO Tony Malkin likened the sector to “the Donald Trump of this cycle” — referring specifically to “when he borrowed so much money in the late '80s so that by the early '90s, the bankers got together and said, ‘It's better to put him on an allowance and support his lifestyle than to let him go bust,'” he said.

Last year, WeWork reported losses of $1.9B against $1.8B in revenue, and its sky-high valuation of $47B has many in the market questioning the company's future ahead of its IPO.

Marx Realty CEO Craig Deitelzweig said in an interview he fears heavy reliance on coworking could — if and when the downturn hits — lead to a similar situation after the dot-com bubble burst in the early 2000s.

“We think it is one of the larger risks out there in the real estate market during a recession," he said.

WeWork’s IPO would allay his concerns “none whatsoever,” he said, and the company will continue to limit its exposure to coworking. WeWork has a small location at Marx's 430 Park Ave.

“We don’t believe in the model," Detzelweig said. "We know as a landlord it makes more sense to do a 10-year deal with long-term tenants that are creditworthy.” 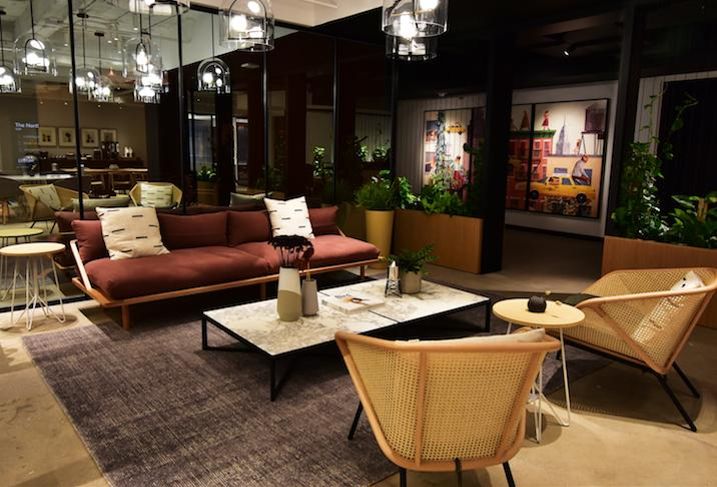 Courtesy of Convene
Lounge at Convene space at 530 Fifth Ave.

Concerns about the model stem back to Regus’ bankruptcy during the 2001 crash. The argument goes that if the economy heads south, small companies and freelancers will go back to working from their couch or the local coffee shop. On the flip side, proponents of coworking and their ilk say offering flexibility will be a blessing, not a curse, in the advent of a recession.

Hodari said that over the past 18 months, Industrious’ model has shifted to forming partnerships with landlords as opposed to arm's-length leases. Those types of arrangements make up 30% of Industrious’ portfolio, according to the company.

With those agreements, he said, landlords can better understand the underlying fundamentals of the coworking company — far more so than with a lease.

“There was a sense of threat,” he said of the real estate view of coworking. “[Now] for almost any landlord I talk to, there’s been another evolution into seeing opportunity.”

On the whole, the rise of coworking has reshaped the tenant expectations of how an office should look and feel. That — along with the new office construction boom in New York — has forced landlords to step up.

“There is no doubt that our customer expectations of what they want in the workplace has changed,” RXR Realty CEO Scott Rechler told Bisnow.

RXR has begun experimenting with more partnerships with companies that embody the sharing economy. At RXR's 75 Rockefeller Plaza office building, for example, there are plans afoot for Airbnb to convert 10 floors into 200 units, WeWork is taking 90K SF across four floors in a cost- and profit-sharing agreement and Convene is running a member’s club in the 32nd floor penthouse.

As a result, Rechler said, RXR is in the process of refinancing the building, though he declined to give specifics.

“In this instance, it was easier to get a new lender comfortable with the concept than the pre-existing lender," Rechler said. TIAA loaned RXR $300M to refinance the building in 2017.

"In fairness to the prior lender, it made a loan assuming a traditional leasing scheme would go through," Rechler said. "The new lender has the benefit of seeing and buying into the planned mix of these uses.”

He added that at this stage, he believes a portfolio should only be 20% to 30% exposed to coworking, although the company remains open-minded about that.

“There is a shift in the marketplace where companies want fully curated, one-stop procurement that they are able to get from flexible workspace providers," Rechler said. "That’s something that is here to stay.” 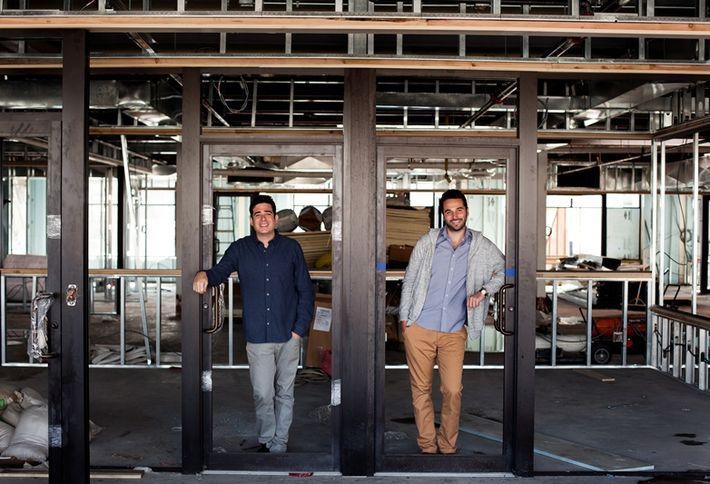 The question of exposure to coworking, and how the banks view it, is one that has become something of a parlor game in the industry.

“What's funny, is it used to be 10%, so 18 to 24 months ago it was 10%, now it's 25%,” said Convene co-founder Ryan Simonetti, adding that he believes most landlords are now expecting that between 5% and 10% of their portfolio has to be allocated for flexible uses.

From a building sale perspective, there is little data to indicate what that right number would be. A Cushman & Wakefield report last year found that eight buildings that traded hands since 2016 where WeWork occupied more than 40% of office space all sold with higher-than-average cap rates, indicating the sales were considered riskier because of the exposure to coworking.

WeWork declined to be interviewed for this story.

Recently, Rudin listed 110 Wall St. — its Financial District tower 100% occupied by WeWork and WeLive — but pulled it from the market after selling another property, One Whitehall Street, to settle estate taxes. The marketing materials noted there were risks associated with the fact the building is entirely leased to The We Company, The Real Deal reported.

However, Rudin said those were standard comments for a building with just one tenant, and not unique to the coworking company.

“There was good and broad interest,” Rudin Vice President of External Affairs Nick Martin said. "Folks recognized the value of the asset, which included WeWork as the anchor tenant."

And in Washington, D.C., an office building that is entirely leased to WeWork sold last month for $119M, Bisnow reported last month, eclipsing $1K a SF, one of the highest per-square-foot prices in D.C. history. 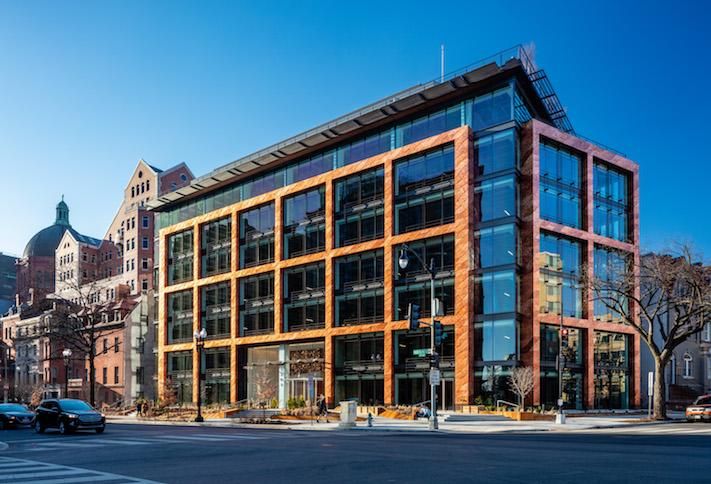 “As more of those transactions come to light and the market can see that there are buyers out there that will pay good prices … I think that just helps their case,” Columbia Property Trust CEO Nelson Mills said. “There are not many examples of that yet, but we haven’t really seen anything going the other way.”

CXP's portfolio is less than 4% coworking, Mills noted. His company last year agreed to lease the entire office portion of 149 Madison Ave., a 12-story building in NoMad, to WeWork. The deal is for 115K SF, and CXP is working with the coworking giant to transform the property.

There are no plans to sell that building, Mills said, but hypothetically, he would expect it would trade at a better than 5% cap rate.

“I think a recession would be a test to the model for sure, though you could argue that it would be more attractive,” he said. “I think we traditional landlords have learned a lot from observing and interacting with the WeWork story … More than ‘Will WeWork survive or will they grow or shrink,' the bigger picture here is what is the WeWork phenomenon teaching us about the needs of tenants?”