Continuing this week's litany of $1B deals in NYC, Brookfield Office Properties has locked in a refi for two of its Brookfield Place buildings Downtown. 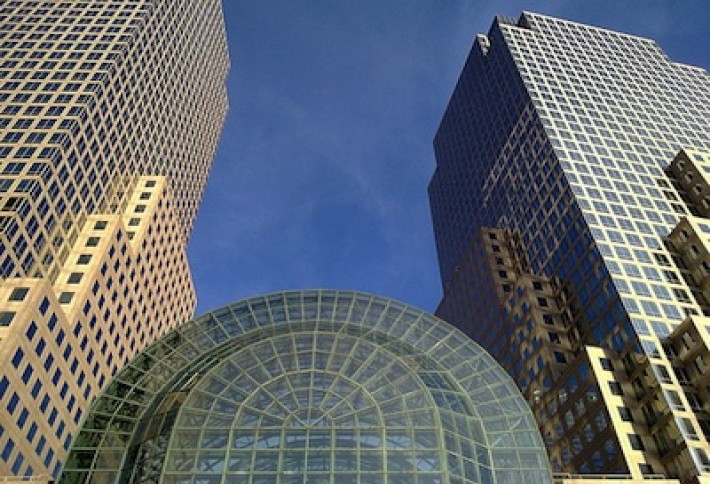 Deutsche Bank, Royal Bank of Canada, Citibank, Bank of America, and Wells Fargo are kicking in $800M for the 2.5M SF 225 Liberty S t and the 1.8M 250 Vesey St, and Brookfield could draw down another $200M. It's a three-year floating-rate loan (starting at 3.44%) that comes with two one-year extension options.

The Community Development Trust and Proto Property Services are purchasing and rehabbing Coney Island's 360-unit Ocean Towers affordable housing on West 24th Street between Mermaid and Surf avenues for $52M. The buyers are putting in $10M. Another $35M will come from the Enterprise Community Loan Fund's New York City Acquisition Fund, managed by Forsyth Street Advisors. Another $4.5M is expected from the NYC Department of Housing Preservation and Development's Article 8A Loan Program. And Enterprises Bank of America Energy Efficiency Loan Program will kick in $1M. The Community Preservation Corp has issued a commitment for a $35M, 30-year mortgage insured by the State of New York Mortgage Agency and funded by the New York City Employees Retirement System.

Massey Knakal's John Ciraulo, Bob Knakal, Michael DeCheser, and Craig Waggner sold 195, 199, 201, and 203 E 4th St (between avenues A and B), all five-story walk-ups, for $29M. John, Craig, and James Nelson arranged the $20M, all-cash sale of 118 and 120-122 East 4th St (between 1st and 2nd streets), totaling 69 units. Bob and Nick Petkoff put together the $23M sale of the 27k SF 360-362 Broadway (eight apartments on one-year leases and two sublet stores) in Tribeca. They also sold 106 Greenwich St (16 apartments and two stores) between Rector and Carlisle streets in FiDi for $5.7M to a buyer repped by Hakimian Properties. And John and Thomas Gammino repped LHG Group and Palladium Management in their $13M cash sale of the development site at 16-18 E 30th St between Madison and Fifth. The buyer plans a high-end, boutique hotel.

Francmen 205 LLC, repped by Eastern Consolidated's Deborah Gutoff and Paul Nigido, sold two buildings (23 apartments and two stores across 22k SF) on the west side of Eighth Ave between 20th and 21st to 205 Eighth Ave. LLC for $15.9M. Their colleague Gabriel Saffioti brought in the buyer.

Alfa Development and Park-It Management acquired 117-119 W 21st St for $12M. The vacant four-story warehouse with frontage on Sixth Avenue is a redevelopment play that can be replaced with 32k SF. Eastern Consolidated's Alan Miller, David Schechtman, and Paul Nigido repped the seller. Their colleague Brian Ezratty procured the buyer.

In Q3, Allianz Real Estate of America will move from 1114 Ave of the Americas to 7,000 SF in W&H Properties One Grand Central Place. Studley's Greg Taubin and Jason Perl a repped the tenant, and Newmark Grubb Knight Frank's William Cohen and Ryan Kass repped the landlord.

InterContinental Hotels Group has signed on to open a second EVEN Hotels property in NYC. Frank Chan and Lance Steinberg own the property,321 W 35th St, where the 77k SF, 150-key hotel will rise. It'll open in the middle of 2015.