After launching the locker system it calls Hub by Amazon in select premier properties last summer, retail giant Amazon opened the service to apartment owners nationally Tuesday, characterizing the system in a statement as one that "brings conveniences and consistency to the delivery experience." 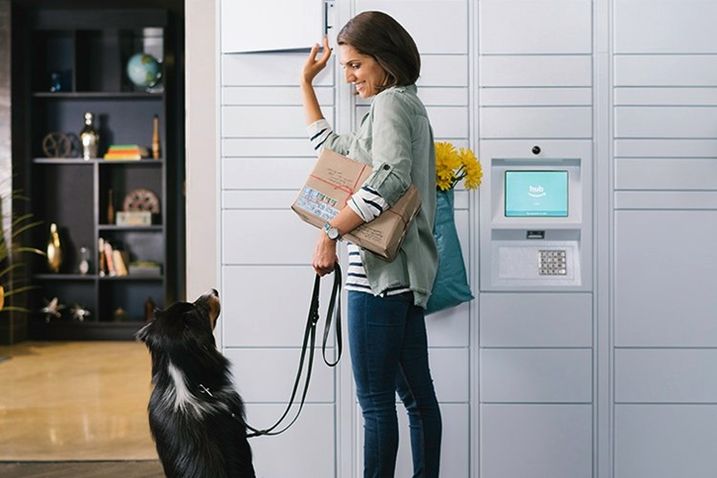 Essentially, Hub by Amazon is installed high-tech lockers at multifamily buildings, the goal of which is to regularize the irregular system of delivering packages that don't fit into mailboxes. What to do with package deliveries to multi-tenant residences has long been a pinch point for tenants, landlords and Amazon itself.

So far, according to the company, it has installed enough Hubs to serve about 500,000 apartment and condo dwellers in New York, San Francisco and other markets, with "thousands more gaining access each month."

Major landlords that have had the system installed in at least some of their properties include AvalonBay, Fairfield Residential, Pinnacle, J.P. Morgan Asset Management, WinnResidential and Equity Residential.

Hub by Amazon lockers come in indoor and outdoor versions, and open by way of a digital keypad. The retailer provides 24/7 support with the lockers.

The system isn't the same as Amazon Locker, which is often seen at retail stores and is open to all Amazon customers and only accepts Amazon packages. The Hub is available only to residents of a specific property, not the public, but accepts packages from any retailer.

Amazon isn't alone in offering lockers to landlords. DHL, for example, has Packstation, a residence-based locker system. There are also startups trying to tackle the same problem, TechCrunch reports, including Package Concierge and Luxer One. Google acquired BufferBox in 2012, but shut it down.

Amazon hasn't made public the cost of installing and maintaining the Hub at an apartment complex, though according to TechCrunch, competitor Luxer One charges between $6K nd $20K for installation, plus service fees.