CRE Asks: What Happens To The Bottom Line When Unemployment Benefits Run Out?

As federal and state support for the pandemic-stricken economy wobbles, a mass of multifamily evictions looms, and much of the impact would be felt by demographics already under extreme economic stress, like communities of color. 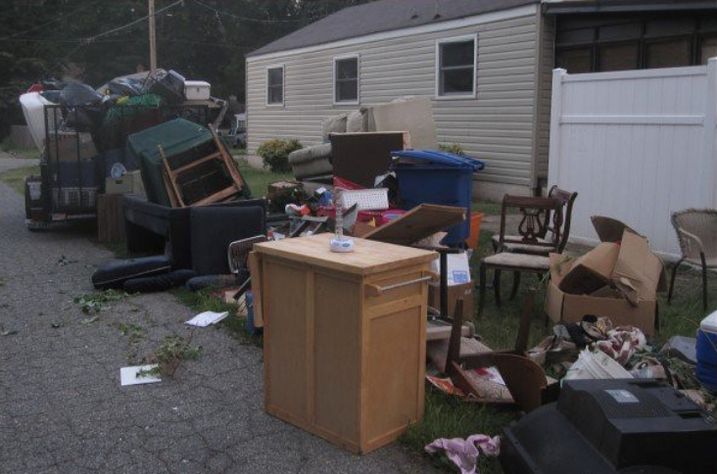 "We could be headed toward an epic storm: the end of federal benefits along with policymakers having a false sense of optimism from the latest official unemployment rate, which was a movement in the right direction," University of New Haven Executive Director, Entrepreneurship and Innovation Program Brian Marks said.

As many as 21% of people who live in U.S. rental households, or as many as 22.9 million renters out of 110 million, are at risk of eviction by the end of September, according to COVID-19 Eviction Defense Project estimates, as reported by the Aspen Institute.

The crux of the problem is sudden, massive unemployment. The U.S. unemployment rate stood at 11.1% in June, according to the Bureau of Labor Statistics, which was an improvement from May, but still higher than the trough of the 2009 recession. As of late June, nearly 33 million Americans were receiving unemployment benefits.

"Typically, the threat of eviction falls heavily on poor communities and people of color, especially Black renters," Princeton University's Eviction Lab Statistician and Quantitative Analyst Peter Hepburn said. "These are individuals who have suffered the most severe health and economic effects of the COVID-19 pandemic."

Between state unemployment and the $600/month extra supplied by the federal government under the CARES Act, which will end July 31, workers who lost their jobs to the coronavirus pandemic have roughly 80% of the income needed to be at their former rent-to-income ratios, the Urban Institute estimates.

While 80% might not be quite enough to sustain rent payments, and the latest National Multifamily Housing Council numbers suggest that renters are slipping behind, it is certainly better than no unemployment payments. As of July 6, according to the NMHC Rent Payment Tracker, 77.4% of apartment households made a full or partial rent payment, down from 80.8% on June 6.

"There's reason to believe that two elements of the CARES Act, the federal eviction moratorium and the expansion of unemployment insurance, have been critical in helping to keep the number of new eviction filings relatively low," Hepburn said. "As those protections expire, and as more state and local eviction moratoriums are lifted, we do expect that filings will increase."

That dynamic is already in play in places that removed their eviction moratoriums some time ago, Hepburn said, pointing to Milwaukee as an example. Wisconsin's eviction moratorium ended in late May, and in June, eviction filings were up 17% compared with comparable Junes in previous years, according to Eviction Lab data.

More specifically, most evictions in June in Milwaukee were filed in majority-Black neighborhoods, with 978 filings during the month in those neighborhoods, compared with 264 in white-majority neighborhoods. Both numbers are up from the average eviction totals in pre-pandemic months.

Whether there will be federal support for rent payments, or even an extension of additional unemployment insurance payments, is unclear.

In late June, the U.S. House of Representatives passed both the Emergency Housing Protections and Relief Act of 2020 (H.R. 7301) and the Health and Economic Recovery Omnibus Emergency Solutions (HEROES) Act (H.R. 6800), both of which would provide $100B in emergency rental assistance, which is how much (at least) the National Low Income Housing Coalition estimates is needed to help keep the lowest-income renters housed.

"Very few poor renters have the cash reserves to weather a personal financial setback, much less a global pandemic and major recession," Hepburn said. "Without further government intervention, these individuals and their families stand to be the hardest hit in terms of eviction as well."

No action has been taken on either bill by the U.S. Senate, though that chamber is considering its own version of a stimulus, which would be smaller than the House version and may or may not include additional unemployment insurance payments or support for rents.

"While the current crisis has heightened the threat of eviction for Black and brown renters, it is not new," National Low Income Housing Coalition President and CEO Diane Yentel wrote in Barron's. "People of color are disproportionately low-income, rent-burdened, or homeless as a result of structural racism. The inequities compound the harm done by COVID-19."

The COVID-19 health crisis did not create these disparities, but it has exacerbated them, Marks said. Factors that influence these racial and ethnic health and economic disparities include higher population density, reduced access to quality healthcare and overrepresentation in essential industries.

"Black and Native Americans bear the brunt of infections and fatalities, and Latino and Black people bear the brunt of historic job losses," she said. "Now their homes, and with them, their families’ ability to stay safe and healthy, are at risk." 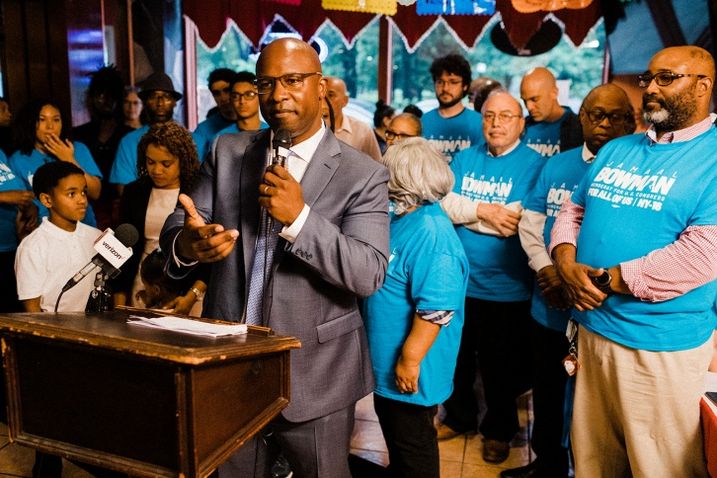 Courtesy of Bowman for Congress
Jamaal Bowman, the presumptive Democratic nominee for U.S. Congress from NY-16, who advocates for an "eviction blockade."

National Housing Conference President and CEO David Dworkin points out that even extending the moratoriums doesn't address the fundamental rent problem exacerbated by the pandemic.

"The flip side of the moratorium is that it's an unfunded mandate," Dworkin said. "We've been asking the landlords to carry the weight, and the smaller ones especially don't have the resources to do that. Even larger owners have negative balance sheets and increased costs, especially of maintenance and sanitation.

"So there's a crisis for both renters and apartment owners," he said. "We're headed for a cliff, and it's approaching fast."

The answer, Dworkin said, is rental assistance at the federal level, because states moratoriums mean people aren't paying their rent for now, but they will have to eventually.

"How can we except lower or moderate income renters will be able to pay six or 12 months of payments later?" he said. "We have to cover that. This an unusual alignment of interests, for both landlord and tenants."

Some multifamily landlords aren't waiting for government action on moratoriums. Boston-based affordable housing specialists WinnCompanies said it will not evict tenants from about 6,500 units in Massachusetts for nonpayment of rent until the end of 2020. Currently, the commonwealth has suspended nonpayment evictions until Aug. 18.

The company is not, however, letting tenants off the hook for their rent. Rather, WinnCompanies says it expects tenants to demonstrate pandemic-related financial hardship and then enter into a longer-term payment plan agreement.

"We are committed to working with each household to create a realistic payment agreement that is sustainable and achievable," WinnCompanies CEO Gilbert Winn said.

Not giving up on rent is a persistent theme among multifamily landlords, even as they are generally mum about their plans to undertake evictions.

During Essex Property Trust's most recent earnings call in May, CEO Michael Schall said that the number of renters not paying rent but also not asking for assistance was small, about 2.2% of the total. As of Q1 2020, the company owned about 60,000 multifamily units.

"They still owe the money," Schall said. "And we still fully intend to pursue the collection effort. And we will have to approach it a bit differently, given the magnitude of it. And so — but we’re going to still push hard to collect it where we can ... Fortunately, it’s only 2.2%."

Also on an earnings call in May, Equity Residential CEO Mark Parrell took issue with the idea that delinquencies were that high in his company's portfolio, which totals about 79,000 units.

"Maybe [its] $5M of rent we’re chasing around and making progress on," Parrell said. "So I don’t feel like this is a big number of people. I’m more concerned, frankly, about the recession than I am about delinquency in our portfolio."

He added rental obligations aren't going away. "We’re not going anywhere. So these are folks that value their credit that know they’re receiving a great service," he said.

Some states are already extending eviction moratoriums. At the end of June, for instance, Oregon Gov. Kate Brown signed a bill extending residential and commercial eviction bans through Sept. 30, with renters given until March 31, 2021, to pay back rent without penalty.

Other states are letting the moratoriums expire, some at around the end of July, and others are being challenged in court by landlords, as is the federal halt on evictions from multifamily properties with federally insured mortgages.

Despite moratoriums, evictions for nonpayment of rent didn't completely die down as the pandemic set in. In late March, for example, SCG Atlas Coconut Palm Club in Coconut Creek, Florida — which is a Starwood Capital Group property — filed for eviction of a tenant for nonpayment, the Washington Post reports, and there are other scattered instances of such eviction actions involving other Starwood properties.

While governments at various levels are mulling what to do, rent strike activists are focusing their attention on further evictions. Organizations such as New York Communities for Change, the Alliance of Californians for Community Empowerment, Action Center on Race and the Economy, VOCAL-NY, Organize Florida and Action North Carolina all plan to resist any upcoming wave of evictions.

In late June, Jamaal Bowman, the presumptive Democratic nominee for the U.S. House of Representatives from N.Y.-16 (mainly the Bronx and Yonkers), along with members of other organizations, held a Zoom call about a "national eviction blockade."

"How the heck are people supposed to pay their rent when they do not have income coming in?" Bowman said during the call. "What we've called for is a cancellation of rent [and] a paycheck guarantee in the neighborhood of $2K a month."

Because the moratoriums on evictions are being lifted, he said, courts will soon be overwhelmed with eviction cases.

"Some are being conducted via Zoom, without representation, and without due process," Bowman said. "The stress and trauma of living with this on a day-to-day basis is something that Black and brown communities, in particular, continue to bear the burden of."

The impact of mass eviction might go well beyond economics or suffering renters and landlords. Dworkin notes that eviction is a public experience, with belongings dumped on the street and neighbors watching.

"We're already experiencing in the wake of the George Floyd killing," he said. "I'd don't think we want to see what happens when thousands of sheriff's deputies nationwide go into low-income neighborhoods and throw people out of their homes because of eviction orders."