‘This Is The Moment’: Tenant Advocates Look To Use Economic Pain To Make Gains

While a feared collapse — or a mass strike — in residential rent and mortgage payments didn't materialize this month, housing activists plan to keep the pressure on all levels of government to cancel monthly housing payments until the pandemic has subsided. 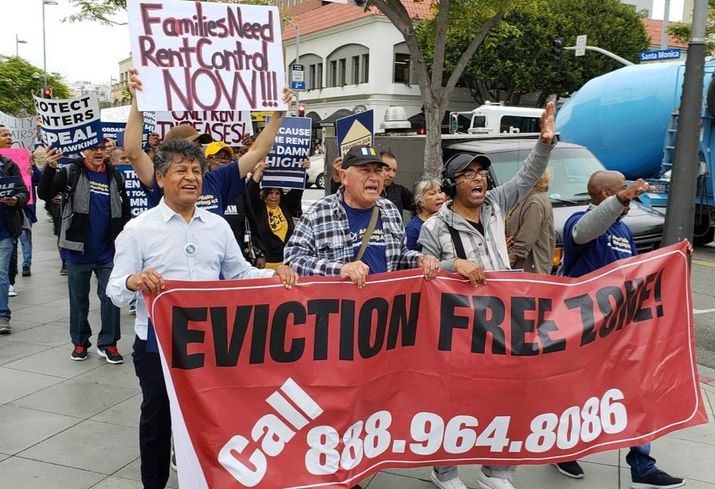 With millions of low-income workers suddenly unemployed — and the prospects of an economic turnaround depending on the unknown course of a pandemic — a chronic U.S. housing affordability problem has morphed into an acute housing crisis. Now is the time for unprecedented action, activists told Bisnow.

"We've been able to pass huge stimulus packages, so this is the moment when it's legitimately possible [to] protect the most vulnerable renters and homeowners," Action Center on Race and the Economy co-Executive Director Maurice BP-Weeks said. "It isn't just an activist's fever dream."

Though more than 80% of tenants at market-rate apartments paid at least some of their rent by May 6, according to National Multifamily Housing Council data released Friday, other data points to growing stress among those renters who occupy lower-cost apartments. As of May 6, only 73.6% of Class-C property tenants had paid all or part of their rent, according to RealPage.

"Payments lagged in Class-C properties," RealPage Market Analyst Adam Couch said. "Renters who live paycheck-to-paycheck have been hit especially hard. Many of their jobs have simply disappeared because of the pandemic."

Because of the rapid disappearance of income for millions — people of color and those earning hourly wages being disproportionately affected — activist groups nationwide, whose work spans a wide variety of causes, have formed a laser focus on housing.

"Housing is the No. 1 issue for millions of people now," said BP-Weeks, whose Detroit-based organization provides research and other support for racial, economic, environmental and educational reform campaigns. "What we want to do is build energy on the ground, so that whatever happens, the most relief goes to those who need it."

Ahead of May 1, a number of groups organized a rent strike under the banner We Strike Together, asserting the principle that housing is a human right. Traditionally, a rent strike is a specific action over a specific grievance, such as poor maintenance and services. The mass May strike was intended to get the attention of state and federal policymakers.

We Strike Together said nearly 200,000 tenants participated in the rent strike in May, though it doesn't break that number down into who didn't pay because they couldn't — the group to whom many landlords say they are already providing relief — and who can pay, but didn't to stand in solidarity.

In New York state, one of the primary hubs of the movement, 50 buildings had between 30% and 70% of tenants participating in the strikes, and about half of the tenants occupying 2,000 units across those buildings didn’t pay rent, according to the Housing Justice For All Campaign. Smaller groups of renters from an additional 45 buildings statewide also went on rent strike.

"Right now, pressure on the government is the most important thing," said Winsome Pendergrass, a tenant leader at New York Communities for Change. "Cancellation is necessary so people at the bottom of the ladder can breathe."

The idea of rent and mortgage cancellation has already gotten some traction in Congress. In April, Rep. Ilhan Omar, a liberal Democrat from Minnesota, proposed the Emergency Rent and Mortgage Cancellation Act, the thrust of which would release renters and mortgagees from payment obligations for as long as the pandemic is a national emergency.

The measure would only apply to owner- or renter-occupied units and would establish a landlord relief fund administered by the Department of Housing and Urban Development to compensate owners who lost rent. Accepting relief from the fund would require landlords to agree to a number of conditions, many of which are long-standing goals of housing activists, such as agreeing not to raise rents for five years, evicting only for cause and accepting Section 8 housing vouchers.

"Our goal now is to support Rep. Omar and the bill's other supporters in Congress," said Tiana Caldwell, a Kansas City, Missouri-based tenant leader at KC Tenants. "We know it's going to be a tough fight. It's always a process. But now is the time." 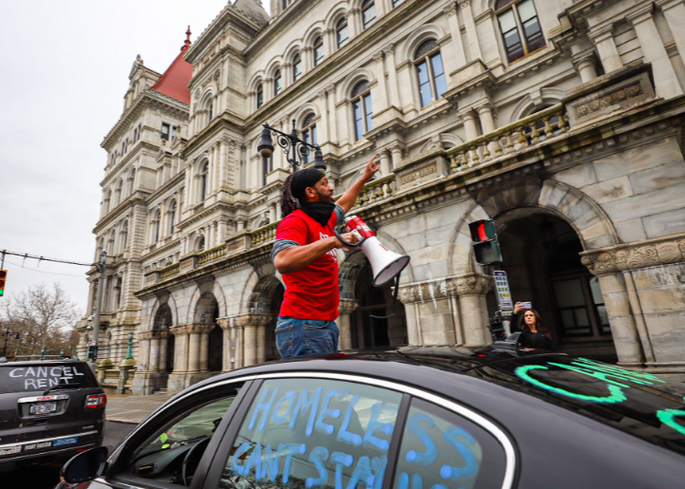 Courtesy of Housing Justice For All
A #CancelRent protester in Albany on May 1.

Landlords object that such an approach goes much too far.

"It makes no sense to give free rent to people who can afford it," Time Equities Chairman and CEO Francis Greenburger said. "We need to concentrate our limited resources to help renters who are in immediate financial need."

To that end, Greenburger said, his Manhattan-based company asks tenants at the 4,200 apartments it owns to supply financial information when asking for rent relief.

"It tells us their situation," he said. "Then we can direct help in an appropriate way."

Providing direct relief to renters is the goal of the Emergency Rental Assistance and Rental Market Stabilization Act, introduced in the Senate by Ohio Sen. Sherrod Brown, also a Democrat. It would direct the Department of Housing and Urban Development to distribute $100B to low-income renter households to help them pay rent. The approach has the support of some housing groups, such as the National Low Income Housing Coalition.

Like state moratoriums on evictions that will inevitably expire and put renters behind the eight ball for back rent, the #CancelRent movement sees direct relief as not nearly enough to address the crisis, Caldwell said.

Besides pressing for action by Congress, the #CancelRent movement is also demanding action from state and local officials. And while the call for a rent strike will carry on into June and later, organizers said, it isn't the only tool they plan to use going forward.

"All our members are reaching out to other people, asking them to call their friends, maybe to get four or five people involved," Pendergrass said. "The people they contact might commit to calling their assembly members in support of cancellation, and calling the governor's office once or twice a week."

A strong social media presence for the movement is also important, BP-Weeks said.

"Right now, it's harder to get a traditional protest together because of social distancing, which means a more important role for social media," BP-Weeks said. "This moment calls for online creativity, and we're ramping up our online presence to push for action."

Traditional street protests aren't quite out of the question, even amid stay-at-home orders and social distancing guidelines, BP-Weeks said. But the crisis does make organizing more complicated.

In Albany, for example, protesters took to their cars on May 1 to demand that Gov. Andrew Cuomo support rent cancellation, with signs calling on the governor to “make the billionaires pay” and “cancel rent” hung from their car windows, the New York Daily News reports. Other protesters were on foot outside the state Capitol, wearing masks and practicing social distancing.

Weeks earlier in Missouri, protesters lined up from St. Louis to Kansas City along Interstate 70 — also practicing social distancing — to demand that Gov. Mike Parson "stand up for tenants" before rent is due again, KSDK reports.

While making demands of policymakers is important, local action is still the most essential part of what housing groups do, said Stephanie Bastek, a volunteer tenant and board member at the D.C. Tenants Union.

"We help tenants negotiate with their landlords, with a goal of establishing collective agreements," Bastek said, similar to how union workers reach agreements with management. "Landlords are more inclined to want to deal with tenants individually, but our experience is that group agreements are always better for tenants, who have more leverage that way."

Bastek's organization is also pushing the Washington, D.C., Council for rent cancellation and expanded rent control going forward. Pressure on all levels of government is the heart of the cancel rent movement now.

"The movement is about getting governments to do their jobs," Caldwell said. "We're supposed to be the greatest country in the world, and the richest one. But we're failing to reply to this crisis with any semblance of humanity."