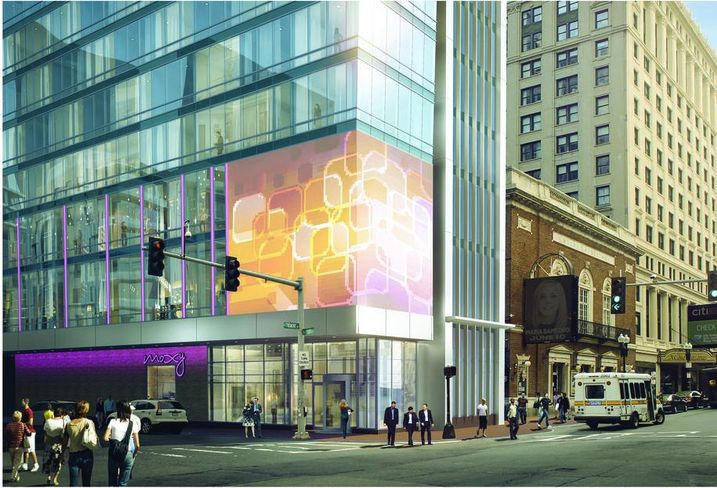 Long past its start as a trendy, niche form of office space for small users, coworking is now infiltrating seemingly every other asset class in commercial real estate.

Flexible work and office spaces are becoming a popular way for hotels to revitalize and even monetize their lobbies, according to a new report from JLL. The ways in which hotels integrate the service vary wildly, from free desks and tables to extra space for guests to paid memberships, the report said.

The Ace Hotel does not charge for or restrict its lobby coworking space, instead using it to drive business to its coffee bar and build brand awareness, according to JLL Capital Markets Research Director Lauro Ferroni.

In contrast, Eaton Workshop in Washington, D.C., uses the conventional coworking membership model for hot desks up to private offices, offering up its hotel's amenities such as a fitness center and saunas as a member perk. Selina, a chain launched in South America, partially owned by WeWork CEO Adam Neumann and with soon-to-open locations in Miami and New York, works in the opposite direction by offering coworking as an amenity to its guests. Selina also offers hotel accommodations in a coworking-style tiered system, from a hostel-style bunk to a lavish suite.

Regardless of who they let access the space, the vast majority of the hotels foraying into coworking are doing so in areas once used as lounge spaces, which can often be sleepy, inward-facing portions of the building. With the coworking format emphasizing openness and light, airy design, hotel operators see an opportunity to create more engaging spaces that can better connect the interior to the street outside.

JLL Research stressed the importance of touches like high-speed internet in order to make coworking viable in a hotel, but the fact that it can enliven and monetize existing square footage within a building means that it has perked the ears of brands as large as Sheraton and Marriott. The former is installing basic "productivity table" lounges at hundreds of locations with charging ports and rentable desk drawers, while the latter is opting for the Ace Hotel model of spruced-up lounges open to guests and non-guests alike in its Moxy by Marriott locations, according to JLL.

The social, multipurpose design elements of coworking have proven so influential that it has become a staple of high-end multifamily amenity packages, in some cases supplanting more leisure-focused tenant lounges. Optima in Chicago has divided its offerings more starkly, offering business suites for rent in the same building as residential units.

Coworking has even begun to insinuate itself into retail, with the shopping center-focused PREIT signing coworking operator 1776 to inline space at Cherry Hill Mall in New Jersey as a way of putting retail-focused entrepreneurs close to customers. Stay tuned to see if an industrial landlord can find a way to make coworking fit with a distribution center.

CORRECTION, MARCH 1, 12:30 P.M. ET: A previous version of this story misstated the name of JLL Capital Markets Research Director Lauro Ferroni. This story has been updated.