Working from home is starting to look a lot different.

As remote work increases, multifamily landlords are increasingly swapping out clubroom or lobby space for coworking. It can serve as an amenity for residents, and some multifamily owners are taking an extra step — bringing in outside coworking tenants, monetizing the space and perhaps drawing in new residents along the way.

Though they come from the same roots, designing coworking for multifamily is different than building it in office, experts say. 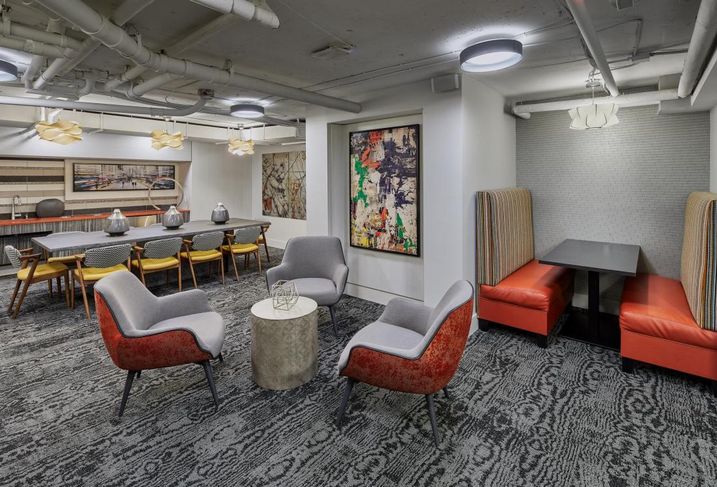 Courtesy of Linowes Design Associates
Coworking space in Connecticut Heights Apartments in Washington, D.C. Linowes designed this space so several people can use it for various purposes.

About 70% of professionals around the globe work away from the office at least once a week, according to a 2018 report by workspace company IWG. That number is expected to explode and fuel coworking demand — the Global Coworking Unconference Conference predicts coworking members will boom from 1.7 million in 2017 to 5.1 million in 2022.

Remote work primarily means working from home. FlexJobs reports that 2.9% of the American workforce is based from home for at least half of their workweek. The majority of remote work is happening in the home — 78% of remote workers primarily work from home versus only 12% in coworking spaces, according to a 2018 survey by Buffer.

To meet this rush of demand, designing common areas in multifamily to include workspaces has changed dramatically over the last two years, according to Linowes Design Associates founder Elyse Linowes, whose firm specializes in multifamily design.

Coworking As An Amenity

Loneliness is cited in the Buffer survey as the No. 1 problem with remote work. The convenience and flexibility of working from home but with other people may be the sweet spot, and filling that need for residents can serve as an amenity for apartment owners. 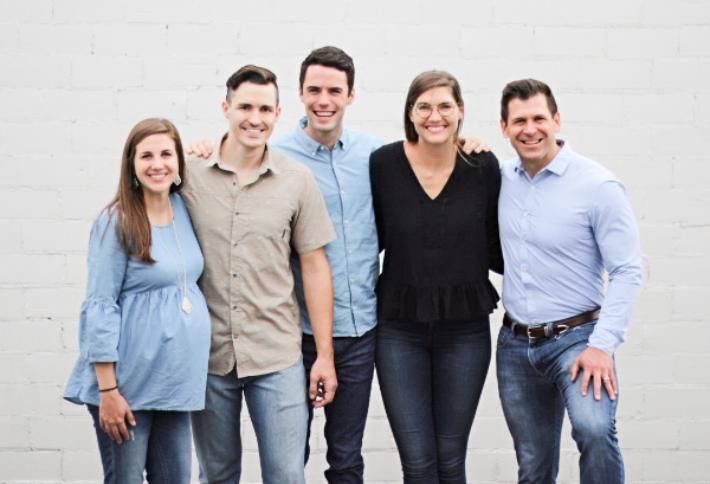 Fighting the “loneliness epidemic” by building coworking in multifamily is Craftwork President Trevor Hightower’s mission statement. His company WorkFlourish, which launched in 2016, was acquired by Craftwork Coffee Co. (led by CEO Riley Kiltz) in May and bolstered by a $3M Series A funding round in June. WorkFlourish is building coworking and coffee shops — separate but integrated with each other — on the ground floor of multifamily properties in Texas. Hightower comes from an office background but under WorkFlourish managed a 10K SF coworking facility within a Houston apartment building. He said that served as a beta test for converting underutilized amenity space in apartments to coworking.

“Being in multifamily really delivers a unique way to deliver that [connection and community],” Hightower said.

Craftwork has three existing coworking locations in retail centers in Fort Worth and is delivering one soon in an Austin apartment complex. It is looking to build 15 coworking/coffee locations in Houston, Dallas and Austin multifamily buildings, partnering with landlords via space-as-a-service agreements akin to Industrious’ platform in the office world.

Though Hightower said Craftwork locations can boost residential occupancy in a building and increase lease retention, they don’t just cater to residents; he and Kiltz expect most users will come into Craftwork coworking for the day and then leave, just like traditional office-based coworking.

At WorkFlourish, up to 85% of coworking members were not residents of the building, and within one year of operations 25 leases were signed at the apartments via the coworking space, either by members or by people coming for meetings with coworking members. He expects these numbers to be even stronger at Craftwork because the coffee component will give it exposure to more people.

Coworking tenants in its facilities benefit from neighborhood locations with easy parking, and sometimes agreements with the landlords allow these members access to multifamily amenities like the gym. (Craftwork may offer “upgraded memberships” that provides this access, Hightower said.) Residents get discounts for coffee and coworking desks. Craftworks will host community events that blend the two groups together.

This platform will “really reimagine the experience when you enter into a multifamily building and make better use of the amenity space in a way that is income-producing for the landlord,” Hightower said. 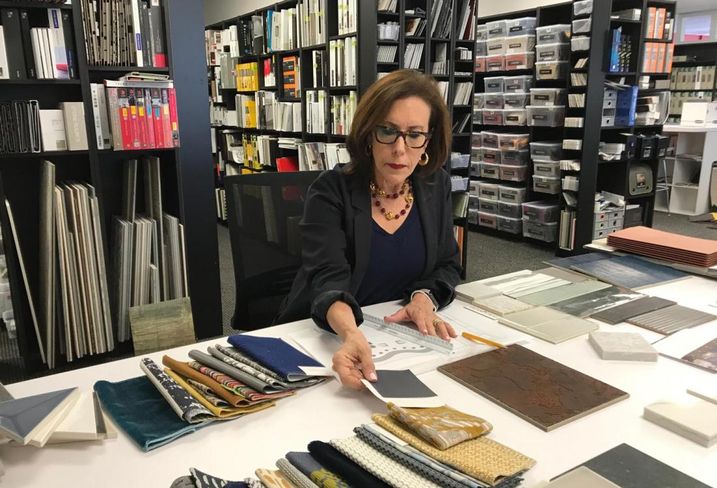 The East Coast projects Linowes has designed have just been for use by residents, but they have the same starting point: adapting underutilized space in existing properties into workspace as an amenity. These spaces include lounge seating but increasingly also have desks and sometimes meeting rooms available, and can take up very large multiuse rooms. The typical business center of the past was about 800 SF, and clubroom/lounge areas averaged 1,300 SF — but the size of coworking spaces trumps both. Having substantial common work areas is a very important part of multifamily today, especially in urban areas and especially when demographics skew younger, she said.

Hightower said the multifamily buzzword is that everyone is fighting an amenities arms race, with more square feet allocated to amenities and an increase in common space. He thinks coworking in multifamily takes it a step further by offering an experience.

“The amenities arms race is the wrong race to win, you really want to be in an experience arms race,” Hightower said.

The main draw for coworking as an amenity is that people actually use it. Workspace at UDR’s 10 Hanover Square apartment building in New York City is in regular use, UDR community manager Katie Ullman said. UDR is open to someone renting the space who isn’t a resident, but it is only being used by residents so far. There are some regulars who work there every day, some she sees periodically in the space and some who just go down for special classes or meetings. The space is getting lots of activity in lots of different ways, she said.

“Amenities residents actually use have huge inherent value for us,” Ullman said, adding that it can lead to tenants renewing their leases. “Given the opportunity, we would definitely build out more [coworking] space. As an amenity platform, it is one of our more successful ones — people have really enjoyed the design and the functionality of it.”

This Ain’t No Office 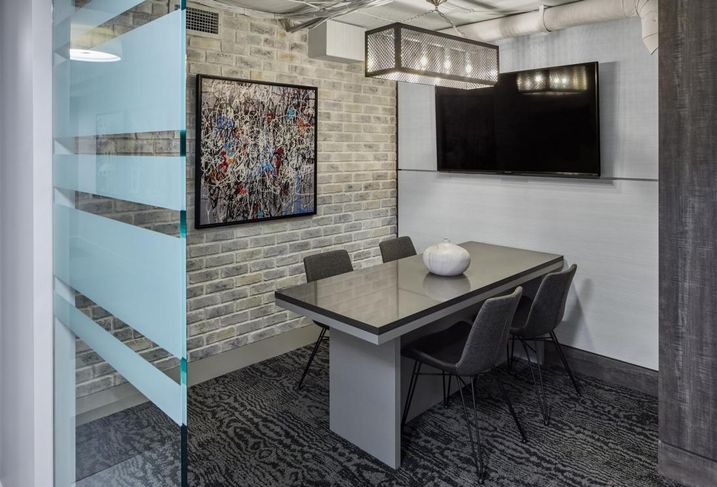 There is more flexibility in designing workspaces when they are in apartments, Linowes said.

“Designing coworking spaces in multifamily residential properties, rather than in office buildings, allows for greater creativity and freedom to design without as many corporate restrictions,” Linowes said. “Because coworking spaces in multifamily properties can be exceptionally versatile and used in a variety of other ways, we approach the design differently than we would an office design adhering to corporate branding or culture.”

Unlike office-based coworking, which typically looks for high-visibility, high-traffic areas, coworking in multifamily can go into areas that weren’t considered viable for much else, like basements or big storage rooms without windows.

“As long as your lighting is great and the design elements are there, it doesn’t matter there are no windows, and that becomes very usable space,” Linowes said.

UDR, one of Linowes’ clients, can attest to that.

The company did a redevelopment of View 34 in 2015, adding two conference rooms and a working area with computers. The building was originally commercial, and the redevelopment into residential left it with a lot of interior space with no windows. Ullman said those areas couldn’t be used for apartments, and it already had sufficient storage, so it decided to add conferencing breakout rooms. This was in 2015, before coworking really established itself, but it was hugely successful, leading UDR to add coworking to 10 Hanover Square. 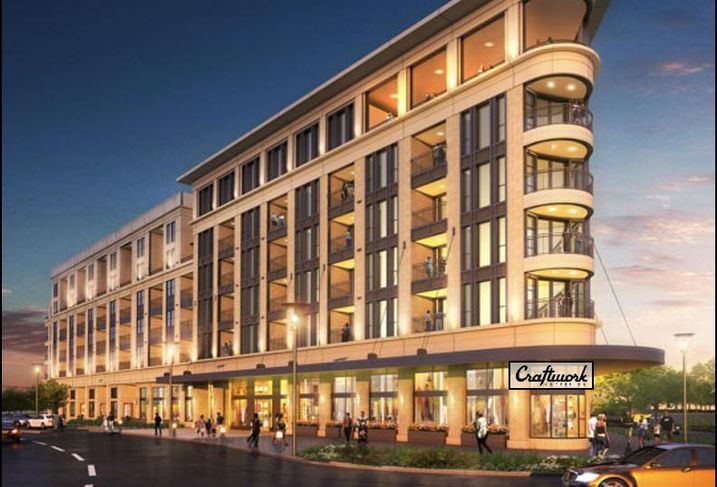 Courtesy of Craftwork Coffee Co.
Rendering of what a Craftwork location looks like in multifamily

Location is more important to Craftwork since it is appealing to nonresidents. Hightower said he requires first-floor locations and loves when the coworking space is adjacent to the multifamily leasing office so there is energy for prospective residents. Having the coffee shop in a highly trafficked area with an attention-grabbing entry is also important.

Hightower said studies have shown the vast majority of millennials want to experience something before they buy, so the notion is multifamily can get prospective residents in the door via Craftwork’s coffee shop and they can experience the multifamily and coworking.

Hightower said coworking spaces in multifamily are often smaller than in office buildings, which can be appealing to potential users.

Coworking is a fixed-cost business, which drives coworking companies to be as dense as possible, Hightower said. That can be a drawback for tenants seeking connection and community. 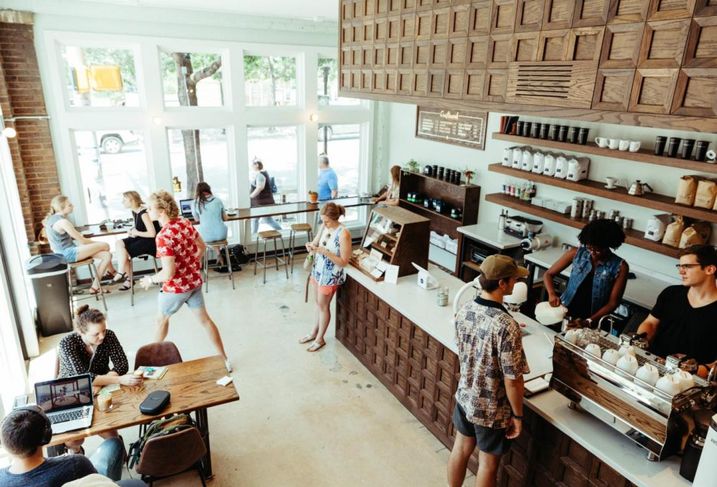 Craftworks’ dual income of coffee and coworking means its coworking spaces don’t have to be as dense. Its typical footprint is 3,500 SF, about 1K SF for coffee and 2,500 SF for coworking, which can host about 50 coworking members.

“When you’re operating in the context of multifamily, you’re not going to operate a larger footprint,” Hightower said.  “We really like that size … when you have that smaller footprint you have easy access; you can really create that connected community where you don’t get lost in the crowd.”

That small scale continues within the space. UDR opened 10 Hanover Square about a year ago with an increased allotment of workspace, broken into small, enclosed rooms because “it seems privacy is important,” Ullman said.

Having a mix of small spaces rather than big gathering tables or large couches is important, Linowes said — unlike coworking in offices, where there are naturally groups of people who work as a team or who want the “collisions” that coworking groups often tout, people coworking in multifamily typically won’t sit next to each other.

“Those that want this amenity don’t want to be alone in their apartment working but they don’t really want to be with anybody,” Linowes said. “I think that’s a very important component.”

In one New York property, Linowes took a large lounge room with lots of TVs and couches and redesigned it for coworking. There are niches and areas with privacy for solo workers and spaces for small groups to work together, but it all has a more homey, comfortable feel. At another property, her firm created space that looks more like typical office coworking, with a central lounge area with comfortable seating for solo workers surrounded by glass-enclosed conference rooms for four to eight people. It has a very modern design, she said, with lots of light and typical presentation tools like a whiteboard and screen.

Deciding which route to go is “a money decision, a space decision, a demographics decision,” Linowes said. Properties targeting students are more likely to go the route of conference centers, she said. Clients tell her that meeting spaces in properties with younger demographics are booked 10 hours a day, so in those properties she tries to design multiple conference rooms with privacy.

Linowes thinks the specifics of designing coworking in multifamily will change, but she is confident the trend isn’t going anywhere.

“While the communal coworking spaces will evolve in time as design trends change and professional needs evolve, the amenity itself will remain a constant in the programming of many apartments to come.”