Paint The Town: The Business Case Behind Murals On Buildings

Before developer Crescent Communities demolished a former Goodyear Tires building in Charlotte, North Carolina, to make way for a mixed-use project, it decided to create an artist-in-residence program.

The program gave artists free rein of the building before it was scheduled to be torn down. What resulted was a brightly painted creative space that ceased to resemble a former tire store and was transformed instead, by murals inside and out.

It was in those moments that Crescent itself found a love for public art.

“It was really eye-opening to see what local art can do for a community,” Crescent Vice President of Brand Aldo Muccia said. “It’s not just art on walls inside a building, but it is livable and breathable.”

As public art on the side of commercial buildings gains popularity, it is presenting a winning solution for cities, landlords and residents alike by engaging the local community, dressing up what might be an otherwise boring wall and helping to advertise the properties themselves. 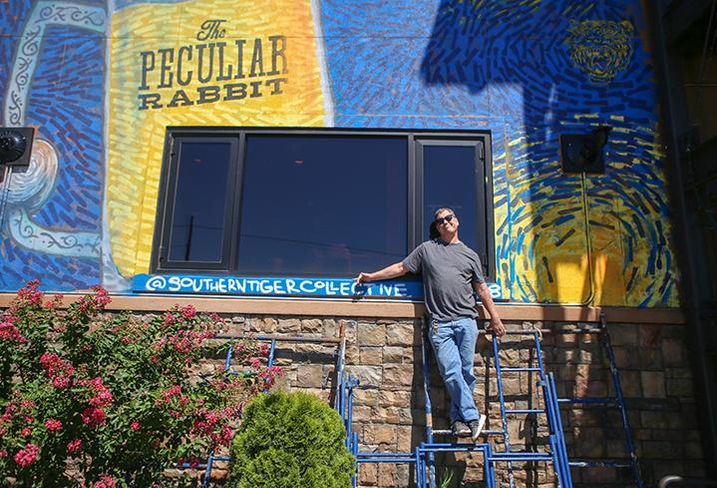 Courtesy of Alex Cason
The Peculiar Rabbit owner Rob Nixon has a mural on the side of his restaurant created by Southern Tiger Collective. It serves as a way to work around the city of Charlotte's sign ordinance.

Some property owners have found value in creating art on the walls of commercial buildings even when it does not lead to a direct monetary gain. Sources told Bisnow that buildings become known for the murals themselves, drawing foot traffic and ultimately, customers. They serve as a form of advertisement, with some business owners using murals as a way to work around tight sign ordinances. Contributing to the arts also allows for a sense of place in growing areas, developers say.

Crescent’s Goodyear Tires building would eventually go on to be torn down, but the initiative is still locally known as the Goodyear Arts program, and the artists have moved their collective to a space inside of adaptive reuse project Camp North End. 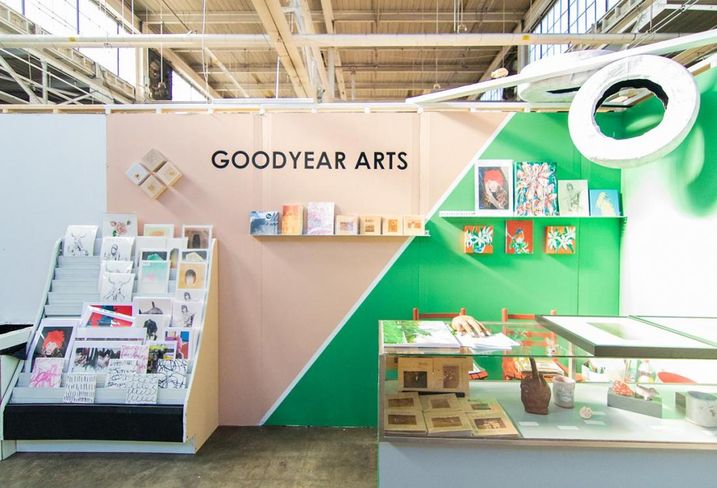 Cresent's next artistic move was made in 2016 when it first commissioned a mural for a multifamily project at Crescent Highland in Phoenix.

They selected Phoenix artist Tato Caraveo to work alongside Graham Carew, an artist with a Charlotte presence who the developers met through the Goodyear Arts program. There are now a few murals throughout the apartment complex. 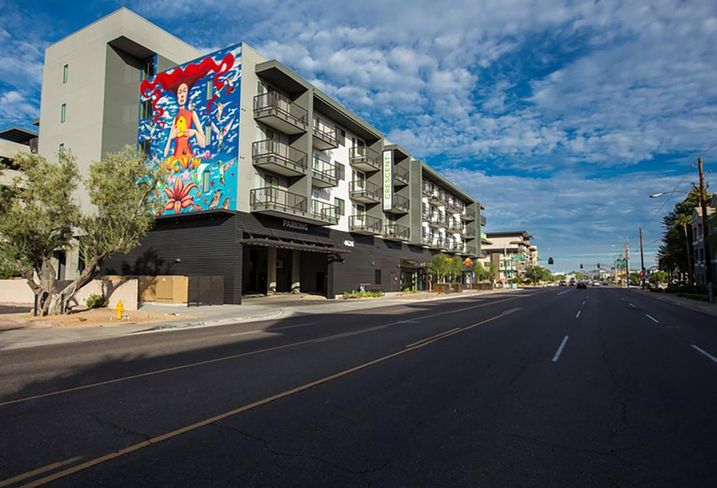 “People go and take pictures by it all the time. We’re known as the community with the big mural,” Muccia said. “They don’t even refer to us as Crescent Highland.”

The developer has since commissioned large-scale pieces, including sculpture installations, on multifamily properties in Charlotte and Tampa, and they are considering public art for their projects in Washington, D.C.

It Pays To Paint

At Crescent’s multifamily project NOVEL Stonewall Station in Charlotte, one of the commissioned projects was created inside of the courtyard area. Future residents now request apartments with views of the art created by Osiris Rain.

“If those murals weren’t there, they would have been big blank walls,” Muccia said. “We created a space that would have been not-so-attractive to somebody and made it more like, ‘I want to live there. I want to see color.’” 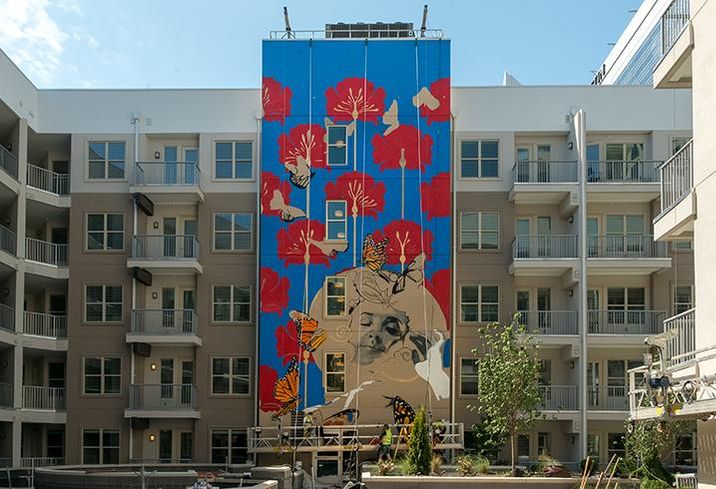 “We’ve seen people come out just to take a selfie and then end up being impressed, taking a tour and end up becoming homeowners. From a fuzzy metric standpoint, you get increased awareness, and I think more so it just strengthens the brand and helps differentiate.”

Crescent does not charge a premium for views of the murals, so there is no direct monetary incentive for the developer. Rather, it serves as a connection to the community and creates a sense of place.

“I don’t know if we’ve measured it against rent or velocity; that’s a secondary concern for us,” Watt said. “We do it to be true to the spirit of the community. It is a natural extension of how we concept each of our neighborhoods in each of our communities. It does end up creating a great sense of awareness and placemaking.”

Value is often given back to a city and community in the form of creating pedestrian access and walkability, simply by putting art in a neighborhood or on a building that would otherwise be forgotten, Watt said.

Art Can Pay Tribute To A Community’s Heritage 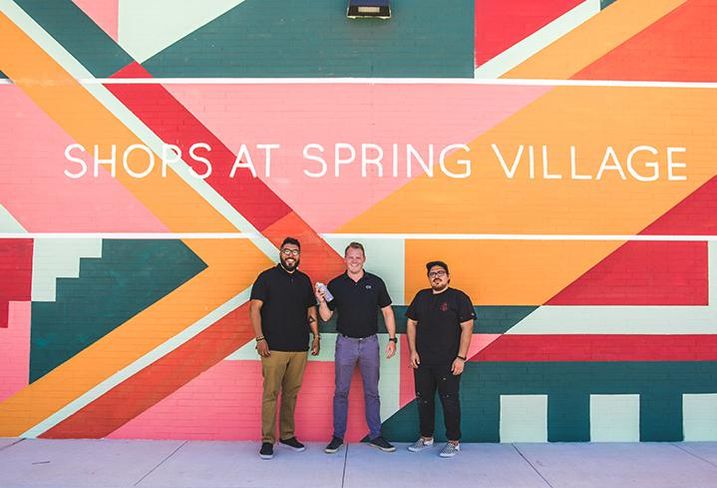 When Houston-based Capital Retail Properties developed and leased the recently debuted Shops at Spring Village in Spring, Texas, they selected artists who created a mural inspired by the woven quilts of the Atakapa tribe that once inhabited the area.

Capital Retail’s co-founder and partner Anderson Smith said while he has become accustomed to seeing art in an urban core, he isn’t used to seeing it outside of downtown, and the company wants to change that; this piece is only the beginning. Not only does art on buildings give the artists a chance to express themselves, but it also helps create personality and focus in a community itself.

“Aesthetics are becoming increasingly important in attracting and maintaining traffic in retail developments. Just as we look at architecture and landscaping to make spaces more appealing and cohesive in their environments, art can [have] a major impact in creating engagement with customers and passers-by.

“With a well-conceived mural, not only is there an opportunity to elevate a property to an area landmark, but also provide a community with a focal point that speaks to what makes it unique," Smith said. 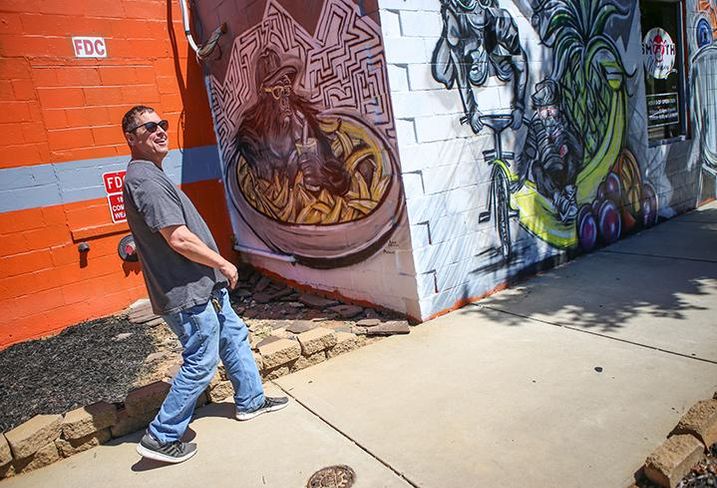 When restaurateur Rob Nixon opened his latest, a smoothie bar in Charlotte called Smooth Monkey, he had a sign made that he put in his parking lot, proclaiming the business open.

It was swiftly shut down by the city in the form of a $50 fine and a letter proclaiming it in violation of Section 8.105.

“The city of Charlotte is very strict on what they let people do to advertise. We’ve gotten three violations already,” Nixon said. “I’ve got no other way to say this: This is the city being assholes.”

Regulations also prevented Nixon from creating a sign the size he wanted. All of the city's red tape gave Nixon another idea, one that worked around the sign ordinance. He had the entire building wrapped in a mural with bananas, monkeys and blenders all over it.

“It’s considered art, even though it’s advertising space,” he said.

Next door at his gastropub, he hired artists who created a Van Gogh-inspired mural that included a rabbit drinking a beer with The Peculiar Rabbit’s name proudly displayed in huge lettering.

“All we’re trying to do, honestly? We’re trying to increase our business. We’re trying to make customers aware of what we have and what business we run and invite them in,” Nixon said. “If it gives us the ability to increase commerce, basically we’re farming taxes for the city. The more I sell, the more taxes you make. I’m a farmer.”

Not every city looks so kindly on street art containing logos or other advertisements.

In Los Angeles, murals were banned on private property in 2002. By 2013, a mural ordinance was established, in part to create a clear distinction between art and advertisement. Building owners go through an approval process with the Public Art Division, and murals are denied if they contain logos or other forms of advertisements — which it defines as “any message that advertises a business conducted, services rendered or goods produced or sold.”

What happens when a business owner decides a mural no longer suits him or her?

When a property owner grants permission to artists to paint on a building, the founder of an online graffiti tracking program said there are legal considerations that business owners should take into account.

The Visual Artist Rights Act protects the rights of artists, and there can be legal ramifications if a building is torn down or painted over. A claim made in federal court could force the building owner to allow the person who put up the graffiti ample time to either relocate it or document the graffiti.

“It opens up a whole litany of questions,” Graffiti Tracker creator Timothy Kephart said in a statement. “Most importantly, is your property no longer your property to do with what you wish because people put graffiti on it?”

This can be a factor even if the art was approved by a previous building owner, and in some cases, even when the art was tagged or illegally created. Kephart said owners should determine whether the art was created on their buildings with or without permission.

“If granting an artist permission to attach art to your property, you need a written agreement stipulating the artist waives their VARA rights,” Kephart said. “If acquiring a property with visual art that could be protected, you need to be well-versed in VARA.”

Before considering dressing up a blank wall with a paintbrush, Kephart said property owners might be better off considering landscaping options.

“Most commercial real estate buildings don’t allow for graffiti on their property because it doesn’t stop someone else from coming along and painting a big white square to create a new canvas and put their graffiti on top of the original graffiti. The property owners are better off planting ivy or bushes that cover the wall. Spray paint doesn’t hold up well on ivy.”