The legal battle between commercial real estate data firms CoStar and Xceligent is nearly a year old, but in recent weeks the two companies have ramped up their public rhetoric against each other. Some of the brokers who have received the near-daily emails or mailed pamphlets filled with attacks from each side say they are not happy customers. 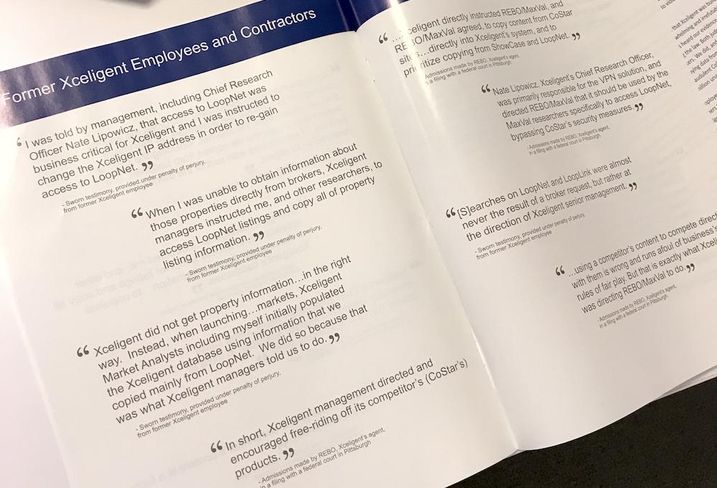 Brokers have complained on social media and told Bisnow they see the dueling marketing campaigns as a waste of time and resources, one that reflects badly on both companies. They say they resent being pulled into the middle of the increasingly hostile dispute.

"It's come up almost daily in our office, people making a joke or showing a new piece of paper that came in the mail," said Dominus Commercial President Stephen LaMure, whose Dallas-based company subscribes to CoStar. "They're actually the laughing stock of the company. We get a FedEx package of CoStar slamming Xceligent and we just laugh. It's almost surreal."

Xceligent parted ways with founder and CEO Doug Curry Oct. 24. The announcement came a day after a judge ruled in favor of CoStar in a separate suit against one of Xceligent's contractors, RE BackOffice, which told the judge Xceligent ordered it to steal CoStar's data. Xceligent's new head, Frank Anton, in an interview with Bisnow the day of Curry's departure, said the shakeup was not related to the legal issue. He did not rule out settling the court battle, which began in December with CoStar's intellectual property suit and escalated in June with Xceligent's antitrust countersuit.

CoStar used the confluence of events that week to launch a massive marketing campaign, sending overnight packages through FedEx to brokers across the country. The packages included anonymous sworn testimony from Xceligent employees, clippings from news articles and a letter from three senators to Attorney General Jeff Sessions regarding a sex trafficking case that has loose affiliations with Xceligent's overseas contractors. Some of its customers did not react well.

At least @Xceligent apologized for email vs @TheCoStarGroup using our fees for spam deliv. What about best interest for your #CRE customers? pic.twitter.com/EPkVyZKQDa

Duke Long, a broker and prominent commercial real estate blogger, said the general reaction from the industry to the frequent letters has been negative.

“Certainly people are not thrilled with receiving this stuff because it doesn’t mean anything to what they’re currently doing, it's just more posturing,” Long said. “The main thing they’re concerned about is that their prices are going to go up or they’re only going to have one basic data source and be beholden to that source.”

While his company laughs about them, LaMure said he views the mailers as a waste of money and would rather CoStar have reduced his monthly fee and keep its legal matters private.

"That's what gets me angry," LaMure said. "CoStar could have sent a letter that says, 'Hey we found ourselves in a legal battle and we feel our competitor did something that was not appropriate in business. We hope this does not interrupt your service in any way.' That would have been respectful and you would think, 'This is a standup company.' But instead they're talking trash, and the flip side is you go 'Both of these groups are scumbags.'"

"The CRE industry desires to work with professionals who respect our industry, who don't flaunt or waste resources, and we appreciate leaders who can be trusted," McCarthy said in his Nov. 2 post. "Try spending energy on improving the industry and creating better products and data, that's what your customers want and what our industry needs."

A $9B D.C.-based company that tracks data on roughly 5 million properties across 368 markets worldwide, CoStar offers market analysis to its paid subscribers and operates a public property listing service, LoopNet.

Asked to comment for this story, CoStar issued the following statement:

"CoStar is committed to providing access to the most comprehensive database of commercial real estate information and supporting brokers with professionally researched, unbiased data," the company said through a spokesperson. "We think it is important to ensure that the marketplace is able to make a fully informed choice about who they do business with."

LaMure said the service CoStar provides is necessary for his brokers to do their jobs, but he is glad Xceligent exists as an alternative and has considered switching over because of CoStar's expensive subscription rates. Given the recent squabbles between the two, he wishes a third alternative existed.

"My level of respect for both companies has gone way down," LaMure said. "If there was another competitor that had the information I need that wasn't involved in this public battle, I would absolutely terminate my relationship with either one."

Xceligent, founded in Kansas City, Missouri, in 1999, grew by entering smaller markets throughout the country where CoStar did not exist or where brokers were looking for an alternative. With investment from its owner, London-based Daily Mail and General Trust, Xceligent has recently begun to push into the largest U.S. markets, an expansion that has coincided with the high-profile battle with the nation's largest property data firm. Xceligent rolled out its New York City platform this summer and is preparing to launch in Chicago, Boston, San Francisco, Philadelphia and D.C.

NAI Partners Vice President Joshua Swank, who has subscribed to both services during his career, said CoStar has more extensive property sales data that benefits him as an investment sales broker. He said Xceligent's platform is more catered to leasing brokers, especially with the customization it offers for tenant brokers to create tour books for companies looking for space.

Swank, based in San Antonio, also expressed frustration with the public campaigns the services have launched around the lawsuits. He said CoStar is the only one that has sent him physical mail about the legal dispute, but the emails have been frequent from both sides.

Receiving too many litigious update emails from CoStar and Xceligent #CRE https://t.co/2QL7dODApc pic.twitter.com/niGDQYoRMV

Swank said most brokers are so busy working with clients that they view the emails as an "annoying" distraction. He also thinks the tone of them reflects badly on the two companies.

"In today's business environment, it's better to be more customer-friendly and say 'we're here for you and have a good cause,' versus what we have right now, which is a lot of email going back and forth and feeling very negative," Swank said. "We're kind of being roped into this conversation. It's a battle for us to feel like one is a good guy and one is a villain."

Brent Hoffman, a Georgia-based broker in Berkshire Hathaway's commercial division, said the amount of mail and public attacks levied from each side has been unprecedented.

A subscriber of both services, Hoffman said he values CoStar for its extensive set of data and he appreciates Xceligent for providing an alternative. But he said the way they have acted during this dispute reflects badly on both companies.

"Is it a good use of resources to go after each other? I don't know," Hoffman said. "It degrades both of their names and makes the customer wonder about the services they're receiving from either."

Bisnow obtained a copy of CoStar's FedEx booklet of anti-Xceligent stories and statements, which can be read in its entirety below: