Capital Markets Will Squeeze US CRE For Rest Of Year

Whether you’re talking debt, equity or global macro trends, the outlook for capital markets seems to be fairly consistent: we’re in choppy waters right now, but there’s a good chance the storm will pass without doing much lasting damage. 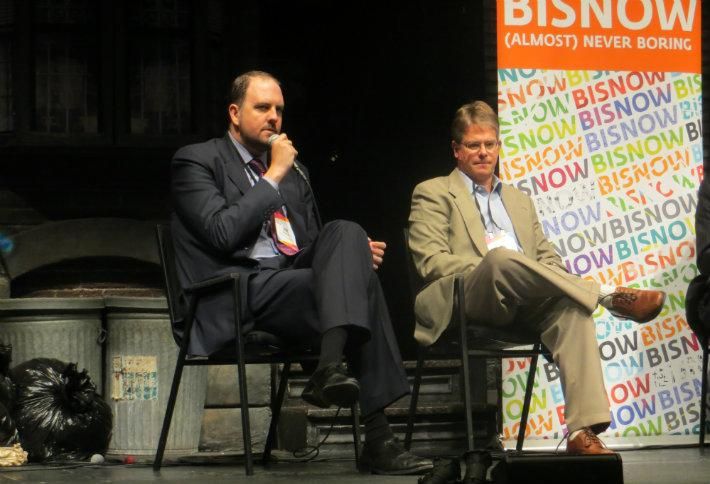 That was the takeaway from Bisnow’s 7th Annual Capital Markets Forum yesterday, where some of the finance world’s best and brightest gathered to discuss what they’re seeing in their respective areas of expertise.

On the debt side, financing has definitely gotten tighter, as the CMBS markets have seen a jump in volatility over the past few months and banks continue to struggle with new regulations.

“Anyone who works in the capital markets had their 'spidey senses' start getting a little tingly late last year,” as the first signs of trouble in the CMBS market appeared and banks started to pull back on lending, Terra Capital Partners managing director Dan Hartman (above on the right) said.

Since then, “banks have dialed credit outlays way back, and the new term sheets going out are not at all at the same levels” that they were even a few months ago, Sam Zabala (left), a managing director at Eastern Consolidated, said. 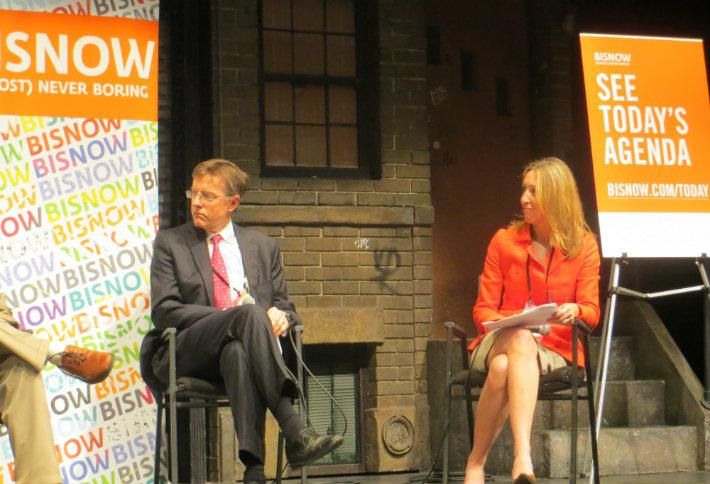 Judging by comments made by nearly every panelist at the event, developers are more likely to be struck by lightning than secure a loan for a hotel or high-end condo project, but bridge loans for other projects are still fairly easy to come by, panelists say.

In general, it’s harder to get a loan—especially at a good rate—than it was this time last year, which has made it harder for developers and investors to get deals off the ground. Another type of firm is just fine with that though.

“Debt funds have got a smile from ear to ear right now,” Cushman & Wakefield executive managing director Garrett Thelander (above) said. New regulations and a frothy CMBS market have made it “hard for banks to do loans, so these guys just bump up the rate a few basis points and step in to fill the gap,” he says. 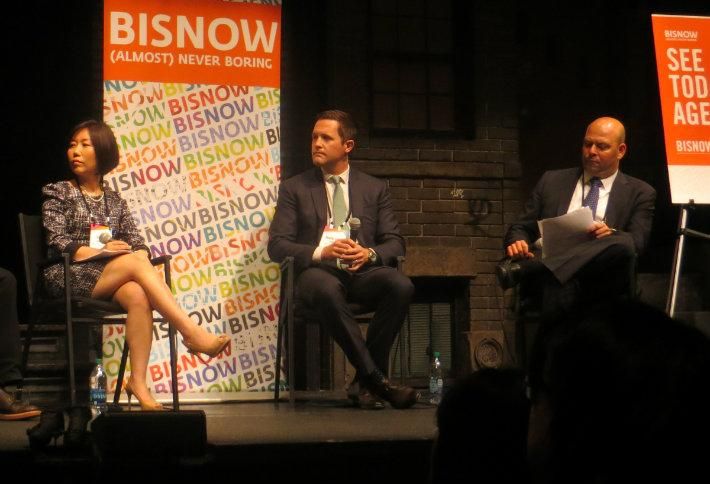 On the equity side, Meridian Investment Sales’ new executive, Helen Hwang, says the financing environment has made it a bit harder to get investment deals done, despite healthy demand.

“When I look at the overall market in terms of how many tours we’re giving, how many bids we’re getting, the general level of interest we’re seeing, demand is very strong,” she said. “But for a variety of reasons this year, there a lot of deals just floating in the market and not getting transacted. At Meridian we’ve been turning down more deals lately than we’ve been picking up.” 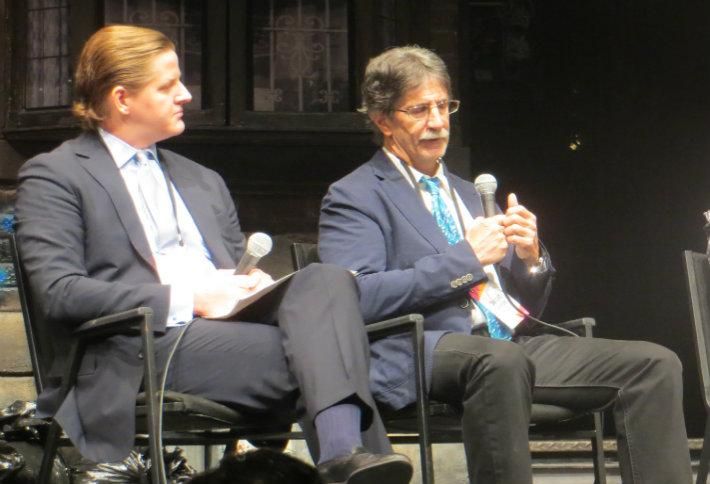 Dwight Arnesen (above on the right), a senior managing director at Rockwood Capital, is seeing the same phenomenon play out, and said it’ll crimp investment deals until the banks can start lending more robustly again.

“Lenders have been pulling back, and that’s had an impact on what equity can pay,” he said. “We went out to 60 lenders for a multifamily deal with terrific fundamentals, and only two of them came back with term sheets. It was stunning.”

In addition to debt funds, foreign capital has also been a popular way of making up for banks that’ve been unwilling, or unable, to lend. Alex Foshay (above on the left), a senior managing director at NGKF, says he expects overseas investment in the US to continue on the upward trend it’s been on the last few years.

“Canadian pension funds, Australian superfunds, family offices in the Middle East, Chinese insurers, they all see the US as an island of stability and I don’t see that changing anytime soon,” he said.

Three out of four of the equity panelists, however, said they’d rather be selling than buying in today’s market. 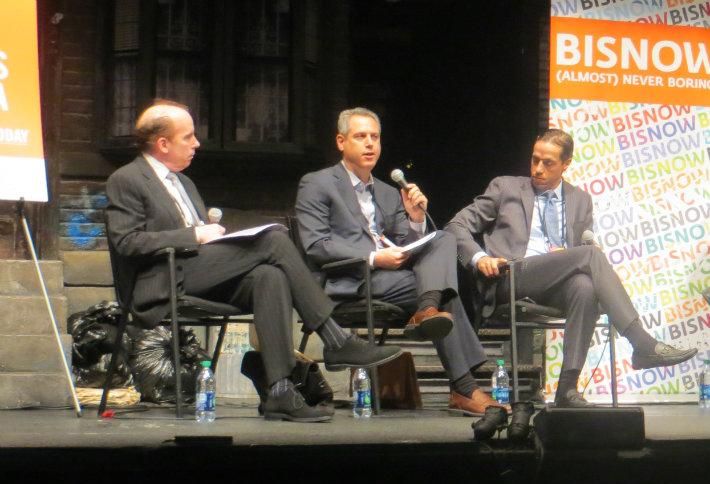 As far as global macro trends go, panelists say there’s plenty to be worried about. Brazil’s fall from grace, China’s ongoing slowdown, continued economic woes in Europe; the list goes on and on.

But Jeffrey DiModica (above on the right along with Hunt Mortgage Group's Jon Trauben and Goulston & Storrs' Bruce Meyerson), president of Starwood Property Trust, says the thing that really keeps him up at night is the plight of banks in the US.

“At Starwood, we’re completely dependent on banks’ ability to grow with us; without healthy bank markets, everything starts to fall apart,” he said. 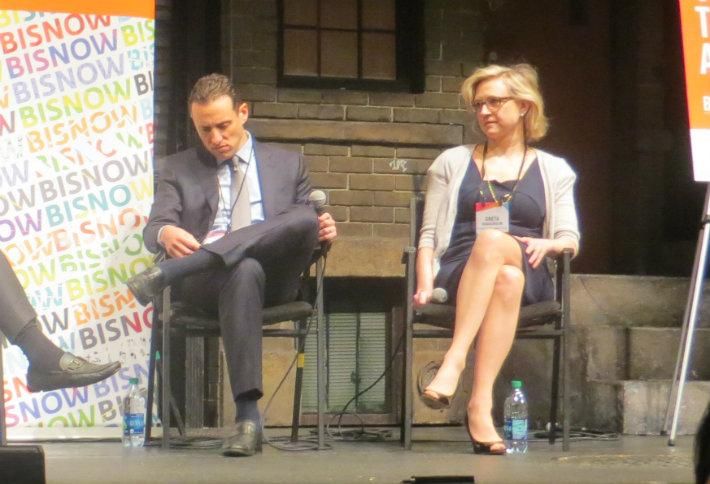 “We worry about the financing sources, as a non-bank without deposits to finance ourselves, we’re very reliant on credit facilities from major banks,” she says. “Will banks remain healthy enough to be good providers of capital, and how will new regulations affect that?”

That seems to be the question.