If the best things in life are worth waiting for, then the £1.5B ID Manchester development is going to be a cracker.

As the selection process for a new development partner restarts, Bisnow asks the three questions that will make all the difference to its prospects. 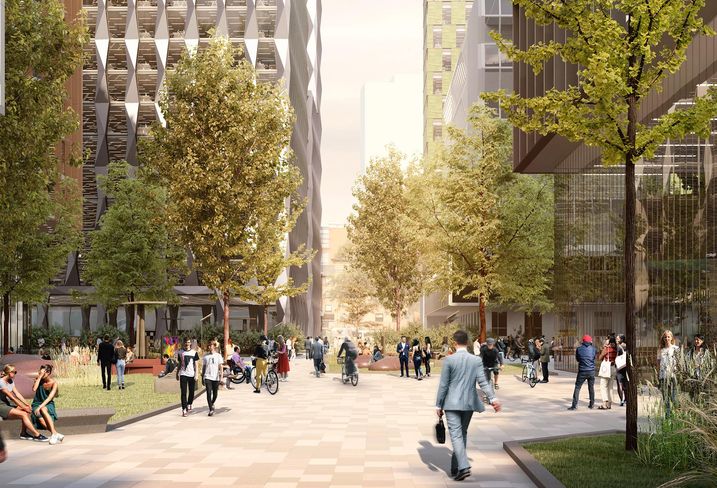 Courtesy of Manchester University
The ID Manchester scheme, as envisaged.

A four-month pause has enabled both the university and the bidders to consider and deal with effects of the pandemic on the ID Manchester project. The final partner selection will now be made in spring 2021.

A self-inflicted delay in 2019 and a pandemic-inflected delay in 2020 have set back plans to select a development partner for the proposed new 4M SF innovation district.

The answers to three questions will determine whether the project faces another period of glacial progress, or gathers real momentum.

Is The Timing Right, Or Has The Moment Passed?

On the face of it, the delays may be a problem, because so much has changed in the last 18 months. Yet the timing may be better than it was in 2018/19 because the idea of neighbourhood development, and mixing workplaces, home and leisure has begun to seem like a sustainable local way to live post-pandemic. Developers looking for the Next Big Thing have a clean slate to work on at this site.

The link to the university and its long history of commercial relationships with AstraZeneca and GlaxoSmithKline and others in the life and biosciences also open timely opportunities for the scheme, as does the Manchester Institute of Biotechnology at the south end of the site.

The timing may be less good for investor-partners and funders, but by the time a developer-partner is selected and has worked out how it wants to proceed in later 2021 and early 2022, the world may have changed again.

Will The Site Attract The Right Kind Of Bidders?

The last remaining sizeable (18-acre) slice of central Manchester is sure to attract interest. But as the analogous development of the Co-Op’s NOMA campus on the city’s northside shows, it may take a few hops and skips before a successful partnership is formed. At the 20-acre NOMA site, the Co-Op chose Delancey as preferred developer, only to part company a year later in 2013. After a period of uncertainty, Hermes stepped in during 2017.

Names in the frame for ID Manchester include Beijing Construction, Peel and Singapore-based Mapletree, PlaceNorthWest reports.

The university and city council appear to see ID Manchester as an opportunity to bring a new player into the city’s property market, perhaps one with strong international credentials. The upside is new ideas, new approaches and new money.

The downside is that new entrants may not understand the city and its ways. They could benefit from a locally experienced development partner who could show them the ropes, and this is where the problems arise. Thanks to existing commitments at Mayfield (U+I), Spinningfield (Allied London) and Bruntwood (Circle Square) the big office developers largely have their hands full. As a result, the likely outcome is an international bidder teaming up with a local residential developer with office inclinations, which limits the pool to a handful of names.

Will The University Get Distracted, Or Get Desperate?

Universities are not property developers, nor do they regularly procure £1.5B projects. Whilst the timing might be good from the property market point of view, it is tricky from the higher education point of view. By slashing income from overseas students, the pandemic has shaken the already wobbly financial foundations of UK universities. The University of Manchester is one of the UK’s largest and most respected but that will not necessarily insulate it from cost-cutting and budget-trimming. Up to £19B losses are anticipated across the sector, and there is risk a dozen institutions will close or merge.

In those circumstances, university decision-making bandwidth may be devoted to more urgent issues than ID Manchester. Alternatively, the desire to make some money from ID Manchester may push the university into hasty choices. Neither would produce a happy outcome.