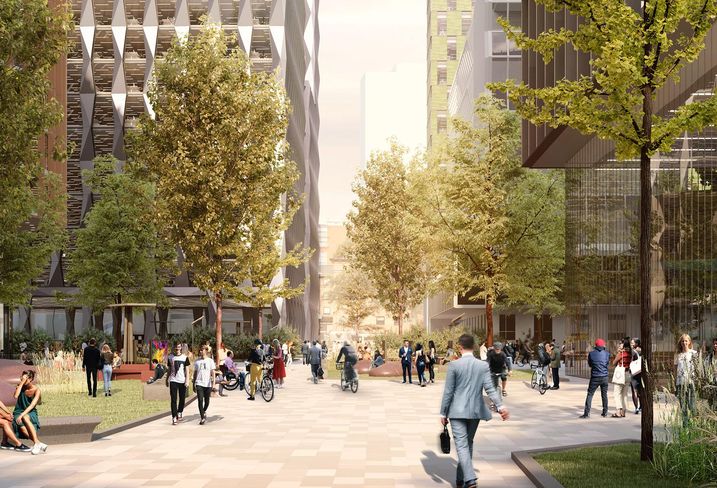 Courtesy of Manchester University
Vision of the future: how ID Manchester could look

Timing is everything in property development: getting out of the traps first and fast can make all the difference. When the property market awakes from its government-induced coma, who will get busy first in the fight for limited funding streams?

Two similar but different proposals for university-related tech districts close to Salford University and the University of Manchester could prove an interesting test. Both are on a substantial scale and both will fish for funding in the same small pool of institutions willing and capable of supporting such projects in Manchester.

Salford has selected a developer, opting for the familiar face of the English Cities Fund, which is already a big name in the city’s development scene.

But Manchester has once again paused its selection process, for another eight weeks. This follows an earlier postponement last summer.

Muse and its partners Legal & General and Homes England, who together make up the English Cities Fund, beat Bruntwood/Capital & Centric and Urban Splash/Peel to win the Salford selection, PlaceNorthWest reported.

ECF has long been involved with the 44-acre Salford Central redevelopment, which includes the New Bailey office scheme where HM Revenue & Customs took a 157K SF regional base.

The £800M Salford development will create a 244-acre city district embracing workspace, university housing and open-market residential including a 30-storey apartment tower. It has been heralded as an alternative to Manchester’s popular but overcrowded Northern Quarter.

The University of Manchester has chosen to pause its selection process for the £1.5B ID Manchester development, the second pause following a long hiatus last summer. The selection of a partner to develop the new innovation district, due to be built on the former UMIST campus site close to Piccadilly railway station, was due for completion by autumn 2020, but could now slide into 2021.

Muse, having bagged the Salford site, withdrew from the Manchester process leaving the Peel/Urban Splash partnership and Bruntwood, this time partnered by Stanhope, still in the race. They are joined by Singapore-based developer Mapletree and by Henry Boot on the four-strong shortlist PlaceNorthWest reported.

Outline submissions for a panel of invited bidders were received in February 2020. The four highest-scoring bidders have now been told the process is paused and will not move on to detailed dialogue for eight weeks, at which point it will review progress. The decision is “more than a property transaction” university officials insist.

“Clearly, it makes sense to pause the procurement process as we all adapt to the unprecedented circumstances caused by the coronavirus outbreak, but we remain committed to this project and I still truly believe we can make ID Manchester the innovation capital of Europe,” University Vice Chancellor Dame Nancy Rothwell said.

The ID Manchester project, touted by the university as one of the last major development sites in the city centre, envisages 4M SF of floor space, of which 2.6M SF will be new workspace. The 650K SF Sackville Building is tipped for residential conversion.