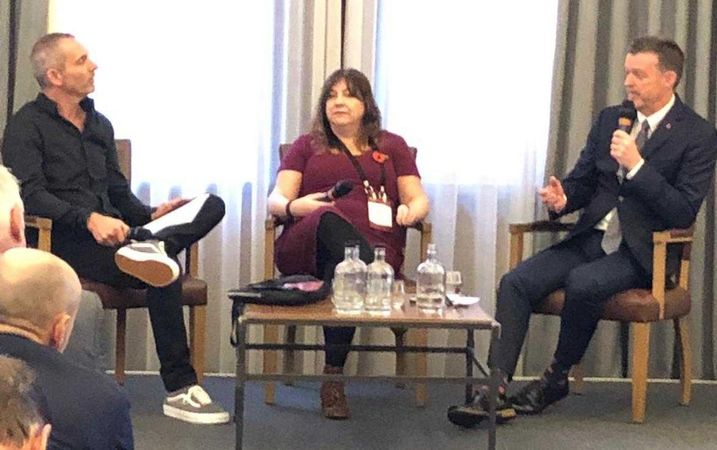 Manchester is not Salford. Salford is not Manchester. Yet the twin cities either side of the river Irwell share the same commercial space and, in the eyes of many public and private sector occupiers, the same regional business hub.

The two cities often have different approaches, and different aims, when it comes to major relocations, office development and city living apartments. What works for one does not necessarily please the other.

So are the two cities, each facing enormous pressures as they seek to guide and shape new development for the public good, in the midst of a covert war? Beneath the silky language of civic friendliness, is there a low-energy conflict in progress?

According to the chief executives of the two city councils — Salford’s Jim Taylor and Manchester’s Joanne Roney — nothing could be further from the truth. But in conversation with Capital & Centric founder Adam Higgins, some chinks of difference emerged.

Has Manchester even forgiven Salford for grabbing the BBC in 2004, asked Higgins? Joanne Roney said there was nothing to forgive about the move, which saw the national broadcaster relocate from Manchester's Oxford Road to Salford's Media City. Jim Taylor agreed.

But would there be conflict between the £1.5B ID Manchester development and the £800M proposals for Salford Crescent, each apparently targeted at very similar science and tech sectors and on a similar scale, asked Higgins?

“They are completely different," Taylor said. "Look at Salford University and our masterplan for the Crescent, and compare it with ID, many people thought they were the same but they are not. Salford is better known for its technical abilities and relationship with small businesses, Manchester has a medical school, Salford does health visitors and midwives. Salford is looking at robotics, Manchester is looking at health innovation, it's all complementary, but different. And there is enough R&D for everybody.”

Taylor said each site was the focus for a potentially world-leading tech cluster, a massive opportunity.

“We’ll be seeking more devolution to the region, more freedom on finance and flexibility, to make the most of these assets,” Taylor said.

“Oxford Road Corridor already has an international perspective, and ID Manchester will build on that," she said. "But people might not know how the two cities co-operate on things like this on timescales and bids, and how the universities work together too. We genuinely are complementary,” she said.

"Of course there’s an element of competition, we have our own pitchbooks, but we have a strong narrative about the city and I’d rather it came to Greater Manchester than elsewhere or overseas. When push comes to shove we want the same thing."

The graphene and biotech clusters, and a growing digital/creative cluster, will help cement them together as part of a wider partnership across Greater Manchester, Taylor suggested. And investing in skills at every level is a shared objective that will help both cities, Roney added. The experience of bidding against each other for the 2018 Channel 4 relocation — in which both cities lost out to Leeds — has helped both to work out what gaps they have, and find ways to fill them.