The Arts District isn’t for just artists anymore. We knew that when Bestia and Factory Kitchen moved in and started drawing fancy diners from the Westside. Now comes a behemoth Millennial apartment house that’s trying to lure your kids from Silverlake, Culver City, Venice and Sherman Oaks. 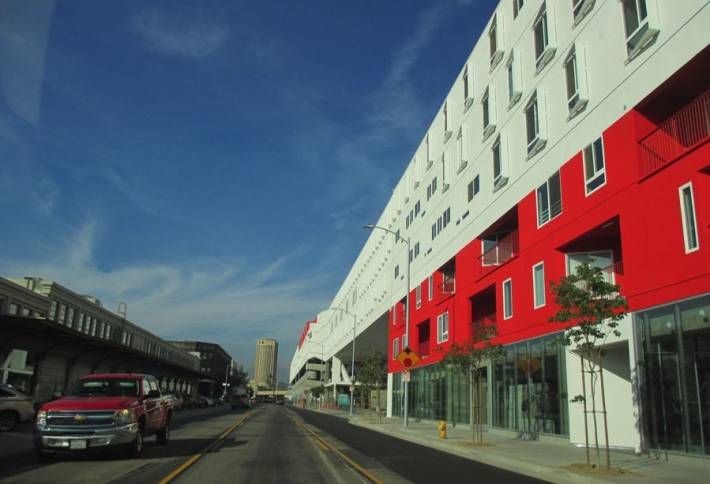 It’s called One Santa Fe, named after the street it runs along (and next to the tracks where the eponymous railroad once traversed), and stretches about as far as the eye can see (1,624 feet, to be exact.) It’s got 438 apartments in 510k SF, and with 80k SF of retail sits on four acres. 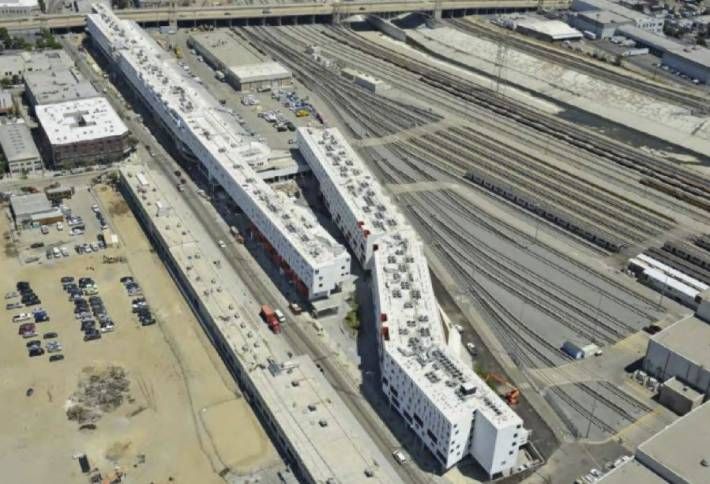 Architect Michael Maltzan appears to have designed it to look like a couple choo choo trains either snuggling up or avoiding a direct hit. All those tracks to the right belong to the MTA, Amtrak and MetroLink, and the site, circa 1883 to 1939, actually served as LA’s “Le Grande Station,” predecessor of Union Station. MTA’s Red Line goes to the Valley, and an extension is expected at some point to the sea. A transit station is rumored to be under consideration, but for the time being you can catch the Gold Line one quarter mile away at Alameda and First. 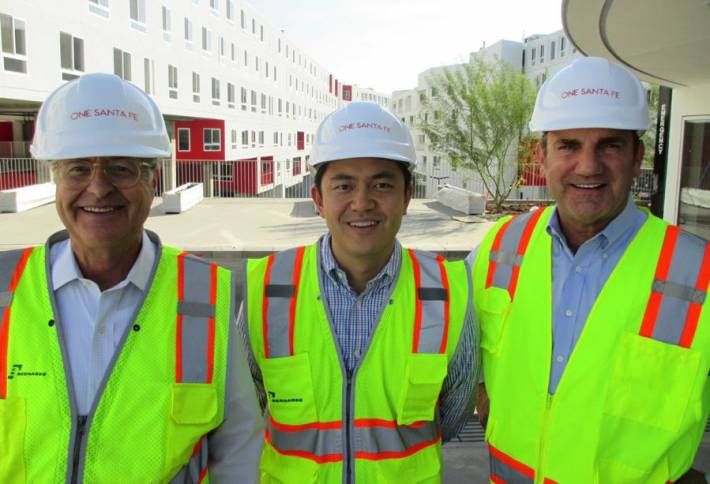 We got a tour the other day from developer/investors Bill McGregor and Chuck Cowley bookending money man Frank Liu of their joint venture partner Canyon Capital, which provides the bulk of the equity along with Goldman Sachs. (Another co-developer is Nick Patsaouras of Polis Builders.) Bill, who's specialized in “architecturally significant” projects like CAA’s old HQ in Beverly Hills and the Wilshire Palisades building on Ocean Avenue, originally scoped out the site 10 years ago when it was parking lots. They negotiated a public-private partnership where MTA provides an 80-year ground lease, used both historic and new market tax credits, did seven months of site prep and utility relocation, and started moving earth in August 2012. 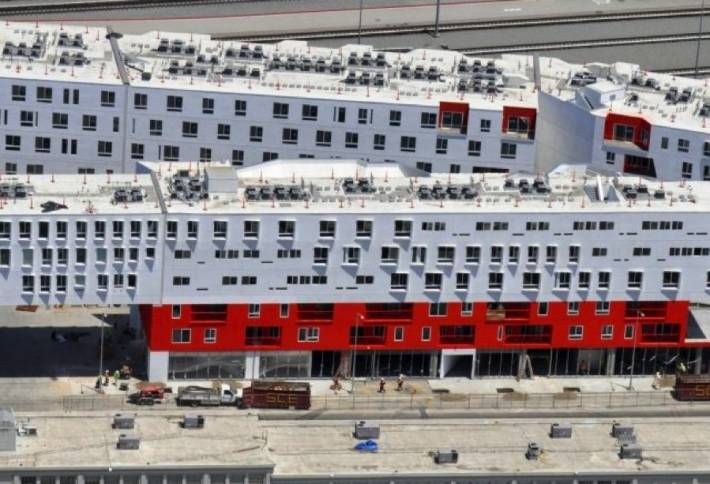 Leasing started just three months ago, and already 193 units (as of today) have been rented. All construction of residential, and base building for retail, should be completed by the first week of December, when the last temporary occupancy permit is expected. Build-out of retail will continue through 2015. 20% of the units are affordable, pegged at 45% and 50% of AMI, and the National Endowment for the Arts gave the City of LA’s Cultural Affairs Department a $75k grant to promote the affordable element to artists and creative tenants. 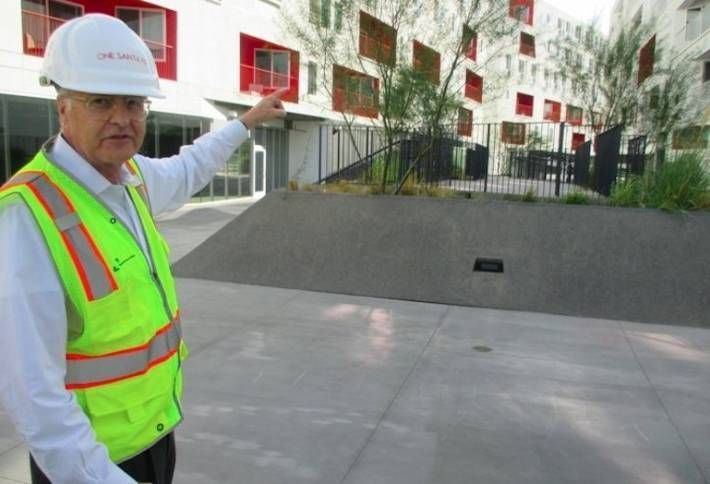 The retail takes the form of a “paseo” that Bill showed us. 35k SF is spoken for by the MTA for systemwide training facilities. A 5k SF arts center with a 99-seat theater has been donated by One Santa Fe to the community. Retailers (shepherded by the Runyon Group of Culver City) will include Grow farm-to-market grocery from Manhattan Beach (5,300 SF), Vegan icon Café Gratitude (4k SF), Malin + Goetz apothecary (277 SF), Van Leeuwen ice cream store from Brooklyn (500k SF), Voyager men’s shop from SF’s Mission District (1,200 SF), and Whittmore men’s clothing (1k SF). 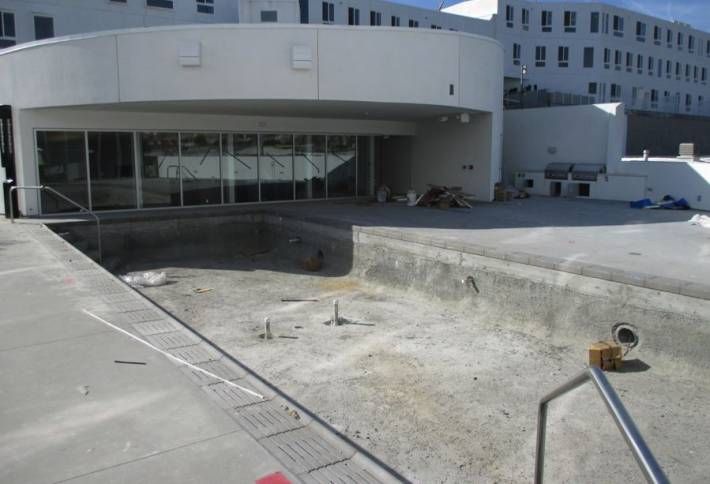 This will be turned into a mecca for saltwater swimming and, behind those windows, community fitness including special rooms for yoga and Pilates. 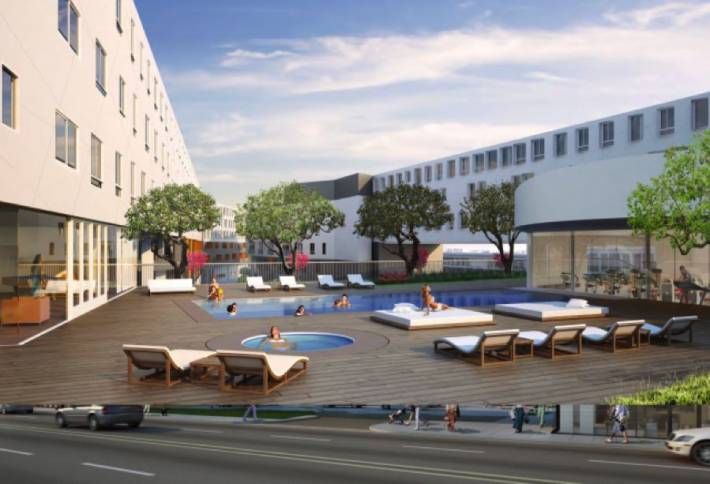 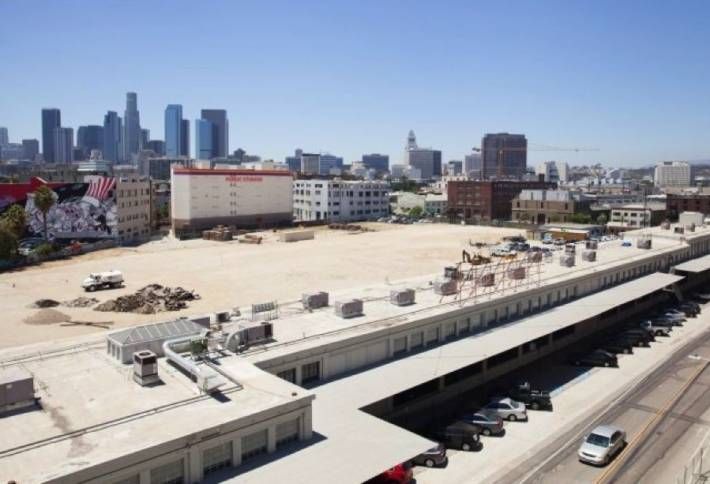 On the other side of the street is the Southern California Institute of Architecture, and on the other side of it will be a mixed-use project similar in size to One Santa Fe, to be developed by Legendary and Associated Estates, with ground to be broken in the next few months. Lowe Development is doing 320 units at 905 E. Second St., and Balour Associates plans 240 units at 695 Santa Fe. 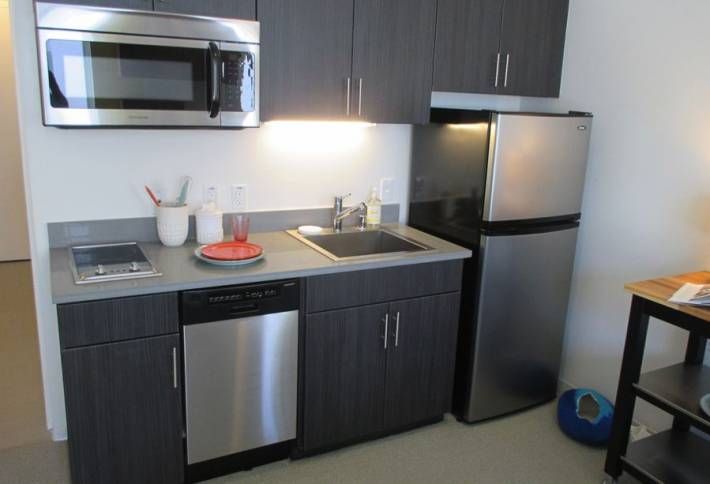 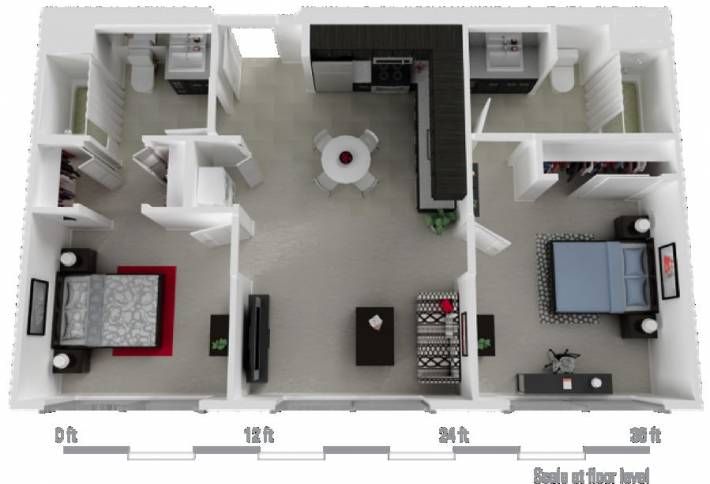 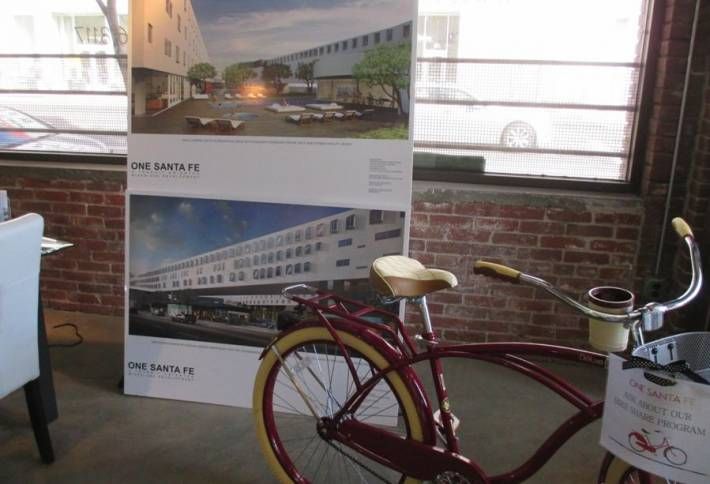 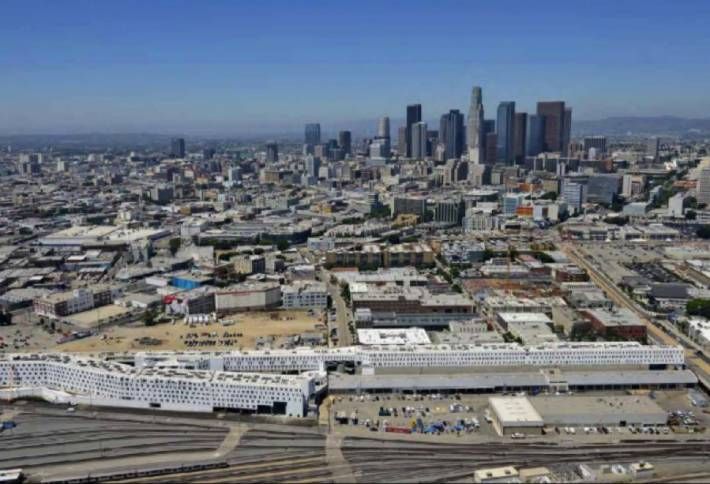 Not your father’s downtown—and maybe not even your older brother’s.