The Los Angeles Arts District is starting to miss something: artists.

With the Arts District undergoing a massive transformation from an artists haven to a vibrant trendy cultural neighborhood destination, many of the artists that once called this place home have been displaced or evicted due to high rents and gentrification.

For the Arts District to continue to thrive and maintain its art reputation, neighborhood advocates and some developers agree, the place needs to keep its artists.

Neighborhood advocates are working with the city and developers to place an affordable housing component to keep artists in the Arts District.

“Part of a having a diverse long-term sustainable community is having a mix of both affordable and market-rate housing,” Trammell Crow Senior Managing Director Brad Cox said at Bisnow’s Neighborhood Series: The Arts District event Tuesday.

“We need to provide local housing for the workers working in the office buildings and creative arts and those working in the kitchen and cleaning the residential apartments,” he said.

Cox was among several panelists at Tuesday's event at the PacMutual building in downtown Los Angeles.

More than 180 people attended the event, where panelists discussed issues surrounding this growing neighborhood, including the area’s rapid growth, the impact of nearby Skid Row’s homeless situation, companies like Spotify and Warner Music Group heading to the area, density and its future.

“The Arts District blends a lot of what Los Angeles doesn’t have, which is a very unique building stock and a very walkable area,” LoGrande & Co. principal Michael LoGrande said. “What people gravitate towards there is the culture, uniqueness and building types. There are so many unique villages that you can see in the Arts District, which is different from these megablocks in downtown.”

Adjacent to Little Tokyo, the Arts District was an industrial area and produce center full of empty factories and warehouses until artists began to flock to the area in the 1970s and 1980s and transformed those abandoned buildings into live/work artists lofts.

Developers soon took notice and more residential, multifamily and mixed-use commercial projects began popping up in the past decade. Currently, about 25 projects are in the pipeline.

The influx of developments has caused many of the artists to leave due to rising rent or eviction, neighborhood advocates say.

“We’ve seen a lot of artists leave and their creativity along with it,” Art Share LA Executive Director Cheyanne Sauter said. “I think we are at a new phase where the developers have taken hold and we’re just trying to preserve what we can into the future.”

In a separate interview, Los Angeles Downtown Arts District Space co-founder Jonathan Jerald said longtime Arts District residents are concerned about the displacement of artists that have made the neighborhood what it is today. LADADS is a nonprofit that supports artists and activities that promote arts in the Arts District.

He rattled off the artists that started their career in the Arts District, ranging from visual artists to musicians to actors. Beck and Red Hot Chili Peppers once performed there. Well-known actors Forest Whitaker and Jenna Fischer once called it home, and artists George Herms, Paul McCarthy and “Dances With Wolves” writer Michael Blake lived in the area, Jerald said.

“Maintaining arts and culture here are so important to us,” Jerald said. “Unfortunately, many are being displaced due to gentrification.”

Jerald and his neighbors began a grass-roots organization, Affordable Housing for Artists, after a prominent building was bought out, displacing many longtime artists.

One proposal to keep more artists in the district is to target affordable housing allocations to artists.

The Affordable Housing for Artists organization aims to create regulations that would require new housing developments in the community to offer an affordable housing component specifically for artists and set aside some common areas in those projects for workshop or gallery space, Jerald said.

Currently, developers are required to set aside 11% of units for all new multifamily developments as affordable housing.

There is a push to allocate half of that 11% for qualified artists, said LoGrande, the principal of LoGrande & Co. Jerald said they are working on a definition of an “artist.”

The group is working with former Obama Assistant Secretary for Community Planning and Development and former head of the Los Angeles Housing Commission Mercedes Marquez to pass the ordinance. Five developers are already on board, according to Jerald.

“There is a lot of tangible value from art,” Jerald said. “When it is all gone, this community will become a social and cultural dead zone. If artists and neighborhoods are gentrified out of existence, it’s like that saying, ‘You pave paradise and get a parking lot.’”

Developers setting aside affordable housing is not easy.

Greystar Managing Director Perry Pound said land and construction costs are high and the prevailing wage requirement is getting higher. It is going to be expensive to keep building multifamily in the Arts District.

“With the cost of labor, you are not going to pay [off] the land value,” Pound said. “Land values will fall for multifamily, that makes it harder to develop, practically speaking, until [at] some point there is a market reset.”

Trammell Crow's Cox said for the Arts District to truly thrive now and in the future, developers need to build affordable housing for artists and low-income individuals.

“Does [the Arts District] become exclusionary or inclusive?” Cox said. “I’m not here to debate one way or the other. I think the dialogue needs to continue.” 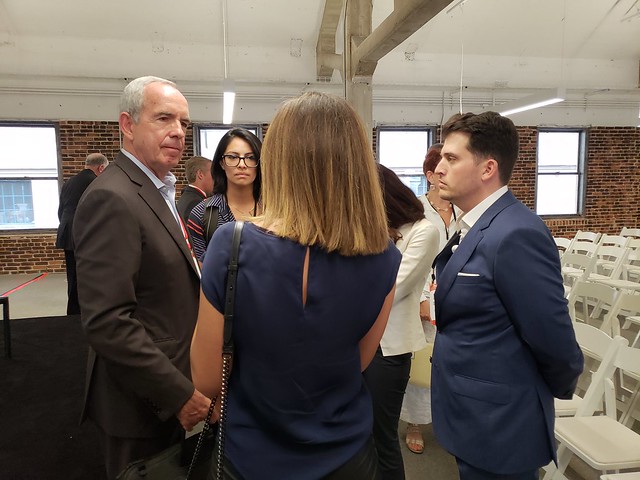