Intu: What’s For Sale, And Does Anyone Want To Buy? 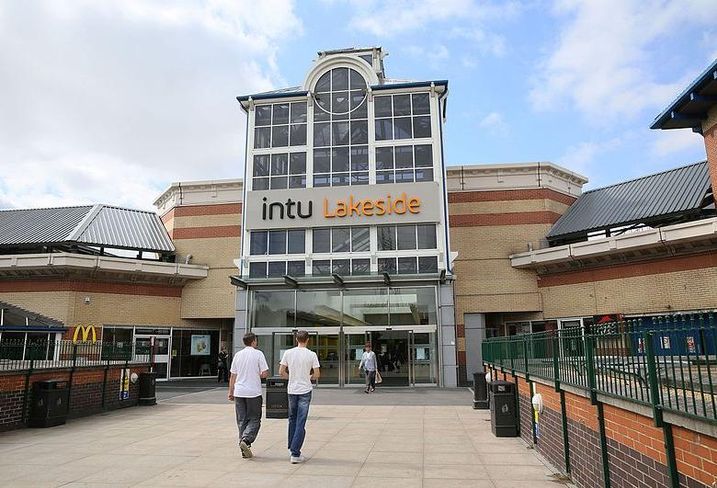 Intu confirmed Friday what had long been coming: The company has appointed administrators, pushing what was once one of the UK’s largest REITs into insolvency.

The company has a portfolio nominally valued at £6.6B, but it has been brought down by its complex £4.5B debt load. Administrators KPMG now have to work out how to recoup as much value as possible for lenders from shopping centres in a market where retail values and income are still falling.

It is possible to pull off big shopping centre deals in the current market: Unibail-Rodamco-Westfield sold a 50% stake in a portfolio of five centres in May for €1B.

“You have to be flexible and realistic on pricing, and not get too caught up about what something used to be worth,” URW Chief Financial Officer Jaap Tonckens told a Bisnow webinar last week. Words for the administrators, and the lenders for whom they act, to bear in mind.

Here is a deep dive into what Intu owns, what the debt is, the level of distress of different assets, and who might be in the market to buy.

Taking Over The Whole Company

In an update to shareholders on Tuesday, Intu said one possibility being explored with lenders was a debt-for-equity swap, with its banks and bondholders reducing the level of their debt in exchange for an equity stake in the company. This would likely be very complicated, given the number of different debt facilities the company has, all secured against different centres or groups of centres (see chart below). 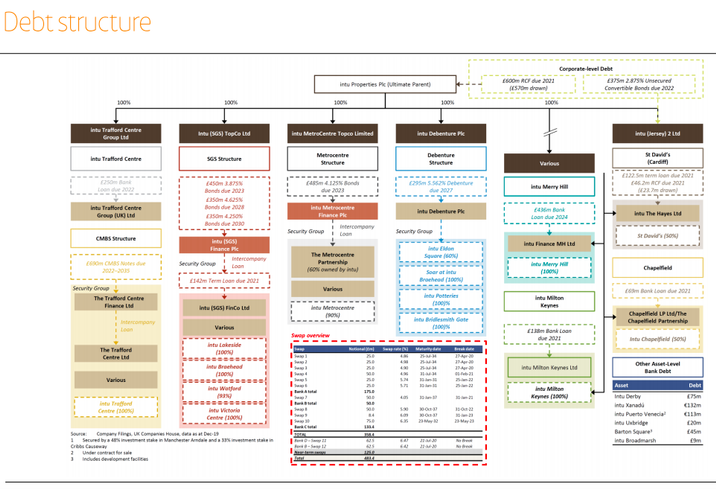 Trafford Centre: A Jewel In The Crown?

Intu’s largest and most valuable single asset is the Trafford Centre, bought from John Whittaker’s Peel in 2011 for £1.65B, in a deal which gave Whittaker a 25% shareholding in Intu. There has been much speculation that Whittaker might try to buy it back. He built it and has professed a deep emotional attachment to it. The questions are — as with all of Intu’s centres — how robust is the income, and therefore what is it worth?

Reports last year suggested Intu might try and refinance the 2M SF Trafford Centre at a valuation as high as £2.1B, but values for even prime centres have dropped by at least 20% since that process was kicked off. According to a presentation alongside Intu’s 2019 report released earlier this year, the centre produces income only 5% higher than the interest payable on the loan secured against it, meaning if income drops by just 2% it will be in breach of debt covenants.

Might Whittaker face competition for a deal? British Land might be drafted in to manage the Trafford Centre on behalf of lenders, according to React News. Could a bid follow? BL would need a partner for a transaction that large. CPPIB, the junior lender, apparently blocked a standstill that would have thrown Intu a lifeline. Could it now take control of the asset?

In Xanadu Did Intu A Stately Pleasure Dome Decree

In Samuel Taylor Coleridge’s unfinished 19th century poem Kubla Khan, conceived following an opium dream, Xanadu was a mystical palace where all your wishes would be granted. For Intu, it is a strong point in its portfolio that could help it to repay debt elsewhere. Its 50% stake in the Madrid mall is valued at around €260M, with €130M of debt secured against it. A sale might therefore raise about £100M of equity to repay debt elsewhere. It is one of its most attractive assets, having better interest cover from its income than any other asset, according to a presentation. Nuveen owns the other 50% but has pulled back on shopping centre deals in the past year. But Intu has recently found buyers for its other assets in Spain, where the retail market is more robust.

In January, Intu breached a loan to value covenant on the Metrocentre, one of the 10 largest malls in the UK, in which it owns a 60% stake. Singapore’s GIC owns the other 40%. The centre has a £485M securitised loan secured against it, and it is currently valued at about £700M, meaning there is still in theory significant equity left in the centre. The income can drop by a further 35% before loan covenants are breached, providing quite a lot of headroom. But there are few buyers in the market for partial stakes in such large regional malls. Sovereign Centros will take over the asset management of the scheme.

For any investor looking for a ready-made portfolio, the snappily-titled Intu SGS loan would be the one to target. The £1.3B debt facility, provided by a group of banks including Bank of America Merrill Lynch and HSBC, is secured against four large shopping centres across the country, including the 1M SF Lakeside centre in Essex, one of the 10 best-performing centres in the country. The assets are valued at more £1.75B, so a sale could recoup significant equity. The income from the centres is among the more robust of Intu’s assets, with room to fall 32% before loan covenants are breached. Davidson Kempner, the hedge fund, has bought into the debt with a view to potentially taking over the centres.

The Locus Of Distress

The most under-pressure assets in Intu’s portfolio are a quarter of centres across the country including Braehead in Scotland, Eldon Square in Newcastle and the Potteries centre in Stoke. These centres are secured by a £231M debenture, where if there is no room for capital cover to fall before debt covenants are breached; and where if income falls by 2% the interest on the loan would not be covered. Centres with such poor income are not in high demand.