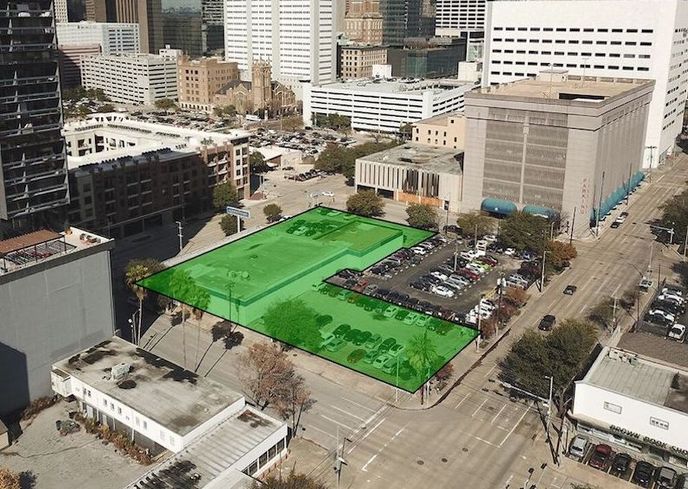 Courtesy of the Downtown Redevelopment Authority
The green block represents the proposed area for the Southern Downtown Park in Downtown Houston.

A new park is on the way in Downtown Houston, which has welcomed more open green spaces in the last few years.

The Downtown Redevelopment Authority approved Lauren Griffith Associates to design the Southern Downtown Park, at the 1500 block of Fannin Street. The design phase is expected to launch by month-end and last through July. The park is expected to open in October 2020.

The firm's principal-in-charge, Lauren Griffith, who has had an active hand in many of the city's most prized public spaces, is back at it again. She was involved in the design of Discovery Green, Market Square Park, Sesquicentennial Park and the Barbara Bush Literacy Plaza at the Jesse H. Jones Central Library.

“Lauren has formed a thoughtful and collaborative design team for this project,” DRA President Bob Eury said. “Not only does the team have a proven track record here in Houston creating beautiful and active public spaces, but they promise to bring fresh and innovative ideas to the table.”

The firm will also tap A'La Carte Foodservice Consulting Group to consult to bring on a café concept and will begin to accept a request for proposals for an operator in January.

The demand driver for green space is to accommodate the influx of new residents moving into Downtown. Trends show residents want to live in communities that embrace the live-work-play mantra, promote walkability and provide parks and other outdoor spaces.

Since 2012, the number of residents living in southern downtown has spiked by more than 1,500 residents, backed by the Downtown Living Initiative. More multifamily developments are under construction or planned for the area.

Houston, as a whole, is committed to investing in parks. Most recently, the Kinder Foundation donated $70M to help improve Memorial Park.

Along with Lauren Griffith Associates as the prime consultant on the park design, Gensler will provide architectural services for the fast-casual restaurants, storage building and other structures.