Lovett Commercial is ready to launch a long-awaited project, and it believes this will be its most important development yet.

“This is the most important work of all the projects that we have been involved in,” Liu told Bisnow. “We have the opportunity to do something very different for the city of Houston. It is not often you get a chance to be involved with a project that takes up 16 acres in Downtown Houston.”

POST Houston will reinvigorate the northern corridor of downtown, home to the historic Theater District. The redevelopment plan brings in the art scene from the performing arts to fine arts. The facility will house installations and exhibits by local and international artists and host events aimed to bring the community together.

As Houston make a big investment in innovation, through the Ino, the Innovation Corridor and The Cannon, POST Houston becomes another place for local entrepreneurs to showcase their products and grow their business. The facility will offer coworking office and a collaborative maker's space.

Situated at 401 Franklin St., the mixed-use building will have restaurants, retail, an international market hall, creative workspace and a 210K SF rooftop park and farm. Future expansion plans include a concert venue, a hotel and an entertainment room. POST Houston will reopen as a cultural hub in 2020.

“We are thrilled that one of the city’s civic landmarks, the former Barbara Jordan Post Office, is being preserved through this adaptive reuse initiative and will be transformed into an iconic destination,” Houston Mayor Sylvester Turner said. “This forward-thinking development is breaking away from the traditional model by creating a cultural epicenter that brings local and international cuisine, retail, art, music and innovation to our theater district."

The original post office was built in 1936, underwent a major expansion in 1960 and was occupied by the U.S. government until 2015. The building was named after Barbara Jordan, the first African American state senator.

The existing complex includes a five-floor administration building and the former mail sorting warehouse facility, with two floors topping 200K SF each. There are a total of 992 columns in the existing building. Historic elements such as original column markings and tunnels have been retained in the design.

To preserve the integrity of the industrial structure, the warehouse will be punctured vertically with ETFE skylights and atriums and horizontally with windows to increase lighting and connectivity throughout the spaces. The floor plan is divided into three atriums each anchored by a staircase designed to encourage connectivity, communication and creativity.

Touting impressive views of Downtown Houston and the Buffalo Bayou, Skylawn, the 5-acre rooftop park, will be designed by Hoerr Schaudt, the landscape architects behind Houston's McGovern Centennial Park. The rooftop park will feature dining and event venues, recreation and open spaces. POST Houston restaurant tenants will offer a rooftop-to-table experience from the farm atop the building.

“In a city that is constantly reinventing itself, it’s an incredible opportunity to transform a building of such solidity and sheer scale. Lovett’s vision to preserve this structure from Houston’s past allowed us to design a multi-layered, interconnected platform for the city’s cultural and commercial future,” Long said. 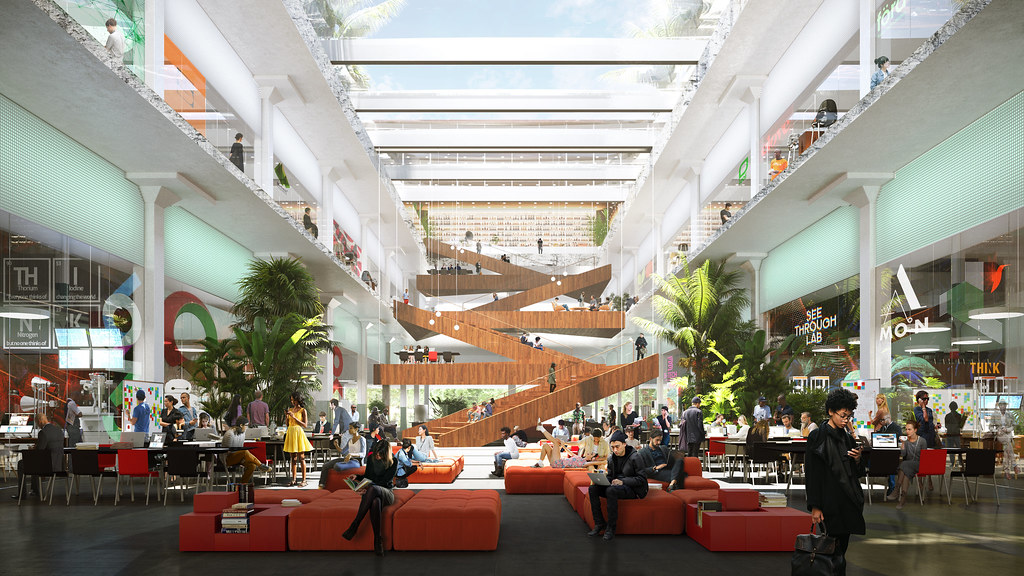