When the Little Man Ice Cream Factory opens this summer, visitors will walk through a cooler and into an ice cream machine. 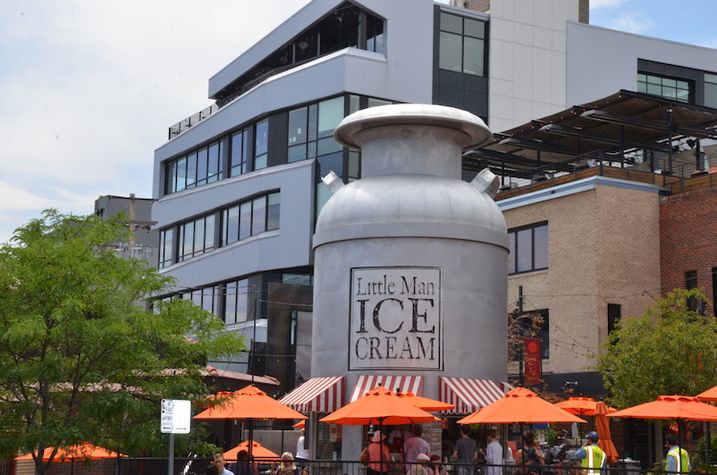 At least that is the idea behind the design of the 6K SF commissary and restaurant on West Colfax Avenue near Tennyson Street. Designed by architect Ted Schultz, who also designed the ice cream can for the company’s original location in LoHi, the whimsical industrial space is filled with round counters and elements derived from the inside of an ice cream machine, such as the churn blades.

“The space is spinning just like the inside of an ice cream machine,” Little Man Ice Cream Director of Operations Loren Martinez said. 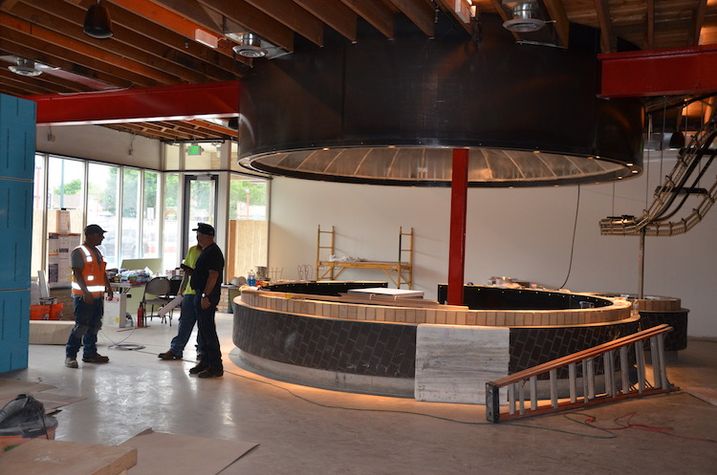 Bisnow/Margaret Jackson
The round elements of the Little Man Ice Cream Factory interior are reminiscent of an ice cream machine.

A conveyor belt acquired from a dry cleaner will move flights of ice cream to where customers are served. There will be a slide and live entertainment from a stage.

In addition to the 6K SF shop and kitchen, where chefs make the brownies and cookies that are churned into the ice cream, there is 800 SF for coolers, including one that is kept at a frigid negative 30 degrees.

“We get shipments of raw dairy every day,” Martinez said. “We go through thousands of limes a week. Everything is made in-house.” 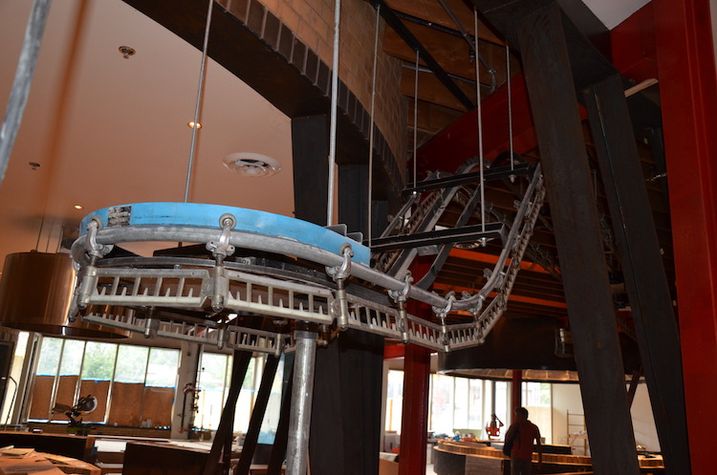 Bisnow/Margaret Jackson
A conveyor belt will transport flights of ice cream to customers.

At its existing 800 SF commissary, Little Man churns out 2,400 gallons of ice cream a week, supplying the company’s four other shops as well as 50 vendors who sell it. At its new location, it will be able to make 10 times that.

The Little Man Ice Cream Factory isn’t the only new store the company will open this summer. There is also Constellation in Stapleton’s Eastbridge development. The shop's design in the shape of an airplane wing was inspired by the airport that once sat on the site, and the name comes from the Lockheed Constellation plane that flew during World War II.

The Little Man Ice Cream Factory and Constellation are the latest additions to developer Paul Tamburello’s ice cream empire. Tamburello started Little Man, which will celebrate its 10th anniversary on July 4, as a tribute to his father, Peter, who was nicknamed Little Man. Since then, he has opened Sweet Cooie's in Denver's Congress Park neighborhood and is in the design development and construction phase of two new businesses, Old Town Churn in Fort Collins and Dang in the Park Hill neighborhood. 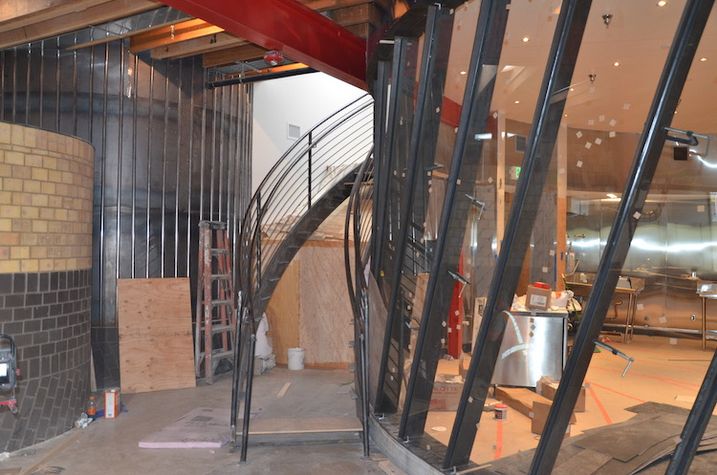 Bisnow/Margaret Jackson
A slide curves around a wall that is meant to resemble churn blades.

Tamburello’s projects aren’t limited to ice cream shops. Nor is development where he got his start. A Denver native, Tamburello studied theology, focusing on adolescent spiritual development. In 1994, he earned the Rookie of the Year award for his first 12 months in real estate, and by 1999 he was in the top 1% of all residential real estate brokers.

Without Tamburello, it is unlikely that Denver’s LoHi neighborhood would look anything like it does today. He is responsible for the development of an old gas station that now houses the acclaimed restaurant Root Down and Highland Lofts, a condo project on West 32nd Avenue between Tejon and Shoshone streets. But Tamburello really made his mark in Highland with the redevelopment of the Old Olinger Mortuary complex, now home to popular restaurants Linger and Lola, as well as the whimsical Little Man Ice Cream Structure that is now the heart of the neighborhood.

In the early days, Tamburello faced opposition from longtime Highland residents who viewed his projects as the gentrification of one of the city’s last bastions of cultural diversity. During the construction of a residential building at West 34th and Tejon Street, where Tamburello was selling condos, someone who didn’t like the direction in which the neighborhood was headed graffitied a man with a suit on one of the garage doors. There was a dollar symbol on the figure’s tie and a bullet hole with blood dripping out of its head.

Despite the resistance, Tamburello continued developing projects that would shape the neighborhood.

Courtesy of Little Man Ice Cream
Constellation will be built beneath an airplane wing that was manufactured in Mexico.

Tamburello is always looking for ways to give back to the community — not just where he is developing, but across the city and even around the world. One year, he donated all of his real estate listing commissions to charity. He bought an old 20K SF greenhouse and developed it into the GrowHaus, a nonprofit indoor farm, marketplace and educational center in Denver’s Elyria-Swansea neighborhood.

For every scoop of ice cream sold at any of his ice cream shops, Tamburello donates a scoop of rice, beans or other essentials to those in need. So far, Little Man has donated food to communities in nine countries across four continents. A few years ago, he acquired Adrift, Denver’s only Tiki Bar, and uses the funds generated by the restaurant to pay for his medical-relief missions leading doctors’ groups and building houses in countries such as Guatemala and Cambodia.

“You see how the other 90% of the world lives, and you want to help,” he said in a previous interview.

CORRECTION, JUNE 7, 7:05 P.M. PT: A previous version of this story did not note that two new businesses are currently in the design development and construction phase. The story has been updated.